As many as 78,971 persons living near the seashore in Valsad, Surat, Navsari and Bharuch districts are being shifted to safer locations 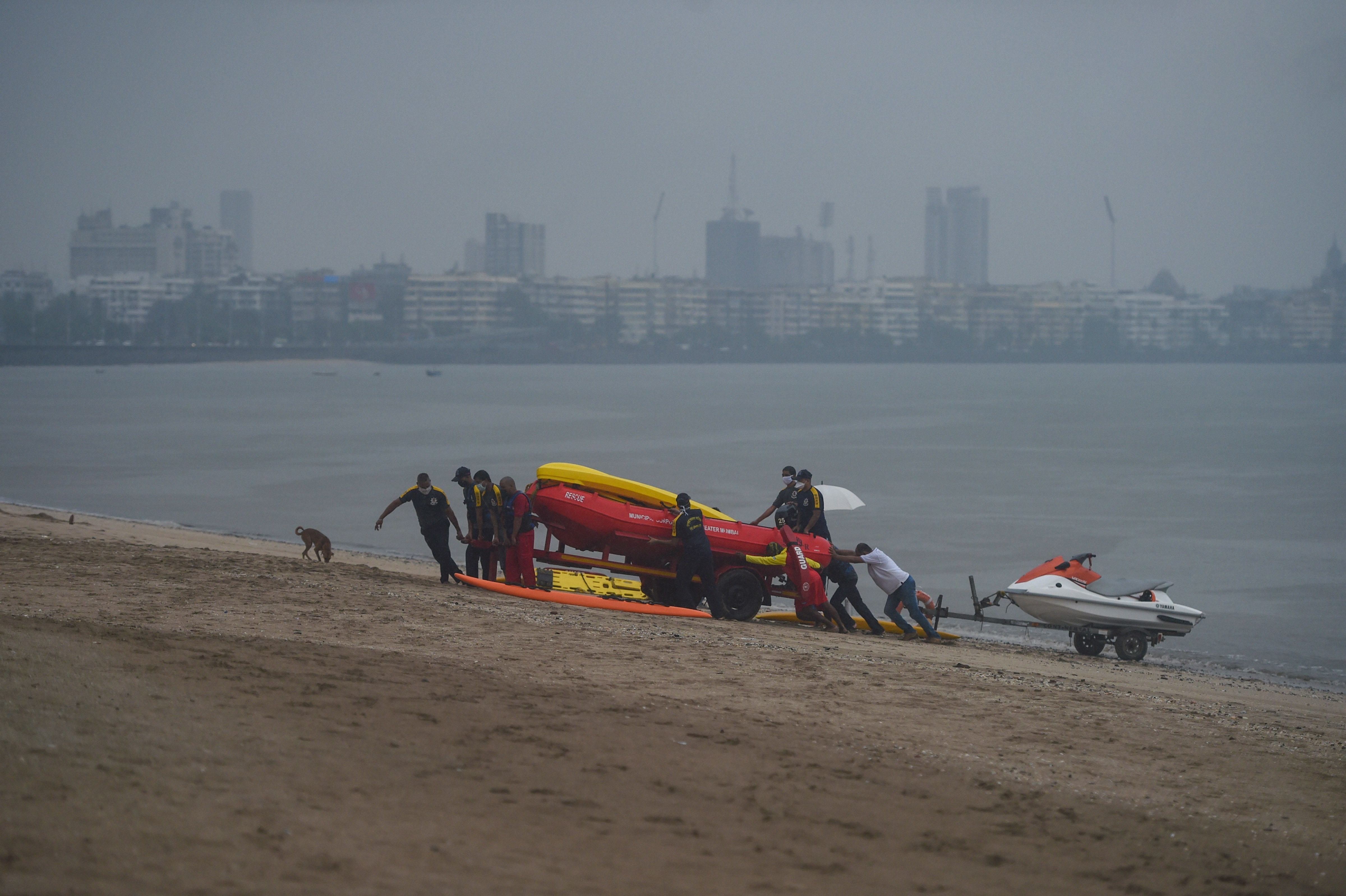 Town planning authority MMRDA on Tuesday said that nearly 150 patients at its Covid facility in Bandra Kurla Complex (BKC) in Mumbai have been shifted to another location as a precaution in the wake of the cyclone.

'The impending threat of Nisarga Cyclone is upon Mumbai. Although the Covid-19 hospital can sustain strong winds of up to 80-100 km per hour, however, with human lives at stake, as a precautionary measure, all the patients (about 150) from the hospital are being shifted by BMC,' the Mumbai Metropolitan Region Development Authority (MMRDA) said in a tweet.

The MMRDA has set up a 1,008-bed facility, where nearly 150 patients are taking treatment.

In adjoining Gujarat, the state administration has started evacuating over 78,000 people from four districts close to the coastline, officials said on Tuesday.

Thirteenth teams of the NDRF and 6 of the State Disaster Response Force (SDRF) have been deployed at different locations, Relief Commissioner Harshad Patel told reporters in Gandhinagar.

As many as 78,971 persons living near the seashore in Valsad, Surat, Navsari and Bharuch districts are being shifted to safer locations, he said.

Patel said the administration has identified 140 buildings which will be utilised as temporary shelters for the evacuees in these four districts.

'In view of the coronavirus pandemic, rescue teams have been given PPE kits and asked to take precautionary measures at the shelters, such as maintaining social distancing and providing masks to the evacuees,' said Patel.

In a relief to people living near the shore, the IMD indicated the cyclone may not make a landfall on the Gujarat coast.

However, it will have an impact in the form of gusty winds coupled with heavy rainfall in the coastal belt, Gujarat's MeT centre director Jayanta Sarkar said.

'As per the present predictions, the cyclone will make a landfall near Alibaug (near Mumbai). Though the cyclone will not cross south Gujarat, it will leave its impact in the form of gusty winds and heavy rainfall,' said Sarkar.

Meanwhile, Modi on Tuesday spoke with the chief ministers of Maharashtra and Gujarat over the cyclonic situation in the two states and assured them all possible help from the Centre.

As cyclonic storm 'Nisarga' approaches fast, Maharashtra and Gujarat activated their disaster response mechanism as they deployed NDRF teams and started evacuating people from vulnerable areas on Tuesday to avoid loss of life.

The two western states, already battling a raging pandemic, which has put their health infrastructure under severe strain, opened new fronts to tackle the fallout of the storm which is expected to make a landfall close to Mumbai on Wednesday. They are likely to be impacted most by the cyclone.

Cyclone `Nisarga' is very likely to intensify into a 'severe cyclonic storm' over the next 12 hours and cross Maharashtra and South Gujarat coast on Wednesday afternoon, the India Meteorological Department (IMD) said on Tuesday.

As Maharashtra and Gujarat braced for the cyclone, Prime Minister Narendra Modi spoke to their chief ministers and assured them all possible help from the Centre.

Ten teams of the National Disaster Response Force (NDRF) have been deployed in parts of Maharashtra for rescue operations in view of the cyclonic storm, Chief Minister Uddhav Thackeray said.

'Out of the 16 NDRF units, 10 have been deployed for rescue operation during the cyclone, and 6 SDRF units are in reserve,' the Chief Minister's Office (CMO) said in a graphic shared on Twitter.

It said precautions will be taken during the relief and rehabilitation works, considering prevalence of Covid-19 in the state.

Elaborating on the government's preparedness for the approaching cyclonic storm, the CMO tweeted that an alert has been issued for Mumbai city and suburbs, Thane, Palghar, Raigad, Ratnagiri and Sindhudurg districts.

Meanwhile, Thackeray's office said those staying in 'kuccha' houses are being moved to safer places.

'Slum-dwellers in the Mumbai Metropolitan Region, particularly those living in low-lying areas, have been instructed to evacuate,' it said.

The CMO said non-Covidhospitals are being made available to deal with any medical emergency.

The state government is also taking measures to prevent power outages and precautions in chemical industries and the nuclear power plant in Palghar and Raigad districts, it said. 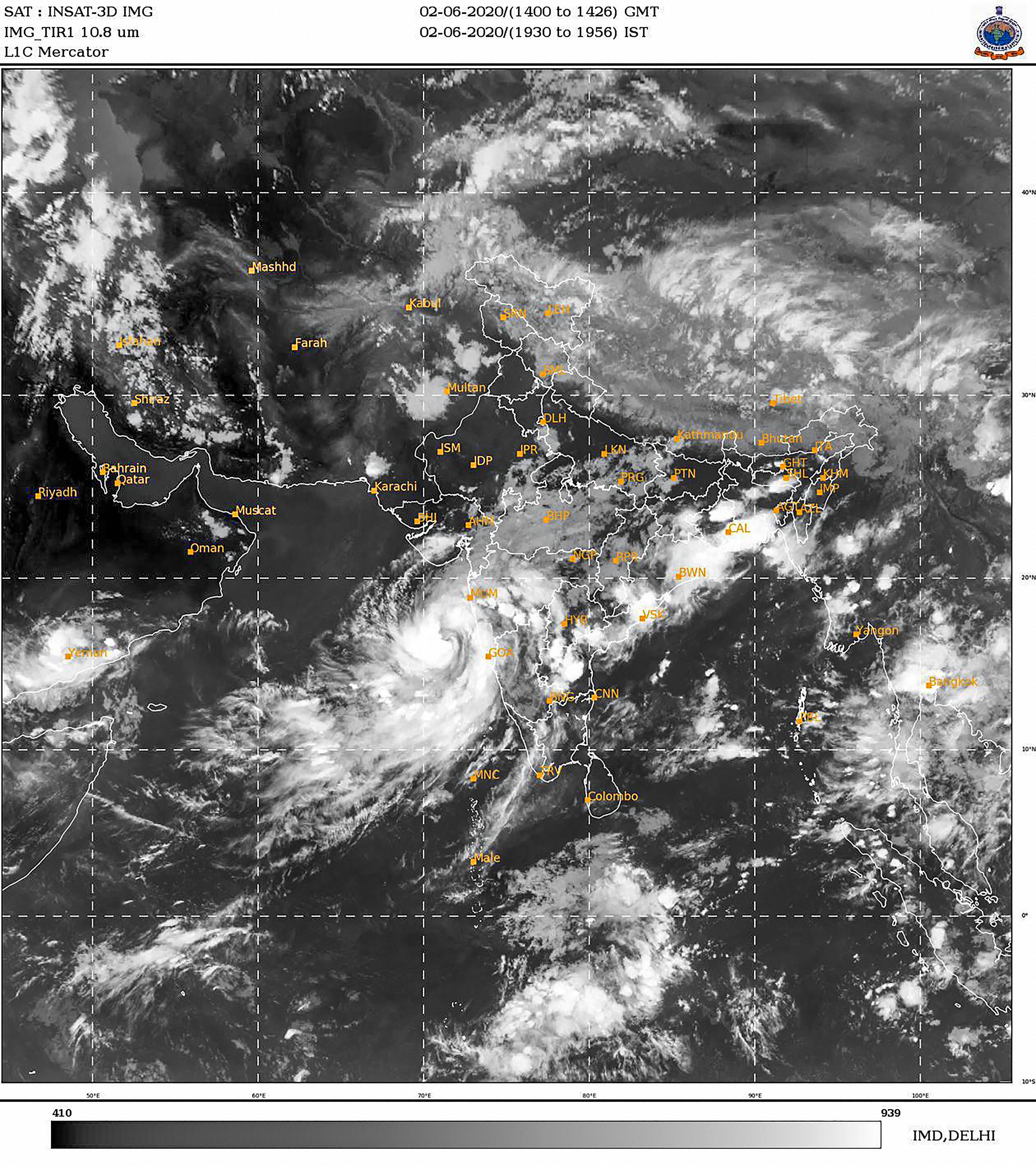 In this satellite image taken from India Meteorological Department (IMD) at 19:30 IST shows a depression formed by Cyclone Nisarga. Cyclone Nisarga is very likely to intensify into a severe cyclonic storm over the next 12 hours and cross Maharashtra and South Gujarat coast on Wednesday afternoon, the India Meteorological Department (IMD) said on Tuesday.
PTI

PM @narendramodi has spoken to CM of Maharashtra Shri Uddhav Thackeray, CM of Gujarat Shri @vijayrupanibjp and Administrator of Daman Diu, Dadra and Nagar Haveli Shri @prafulkpatel regarding the cyclone situation. He assured all possible support and assistance from the Centre.