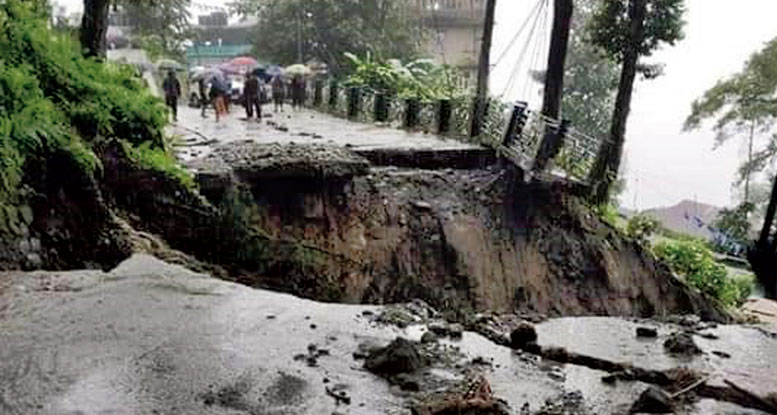 A damaged stretch of the highway that connects Mangan with Chungthang and bordering areas
Telegraph picture
Rajeev Ravidas   |   Gangtok   |   Published 29.06.20, 03:58 AM

The border with China in the Sikkim side has been cut off from the rest of the country after links at two places on the Mangan-Chungthang highway in North Sikkim were washed away in landslides following incessant rain these past 48 hours.

The Mangan-Chungthang highway is strategic because it connects border areas of North Sikkim with the rest of country. Without another road to border areas, early restoration of the sole road link becomes crucial, especially at a time of heightened tensions between India and China.

A source in the Border Roads Organisation (BRO), which maintains the road, said: “We are conscious of the need to restore the road link on a priority basis, but the relentless rain is hampering our work. Boulders are continuing to fall. If the weather turns even slightly favourable, we should be able to restore the link and facilitate the movement of light vehicles in a day or two,” the source said.

Any respite from rain is unlikely with the weathermen forecasting more showers for the next five days.

The rains also triggered a flash flood and multiple landslides in other parts of Sikkim, though no loss of life has been reported yet from the state.

Traffic on the Mangan-Chungthang highway came to a halt since Saturday after parts of it were washed away near the Mangan police station and Lanthey Khola. But NH310A that connects North Sikkim district headquarters Mangan and state capital Gangtok is open for light vehicular traffic.

A flash flood at Passingdang village in Upper Dzongu also damaged houses and a school building.