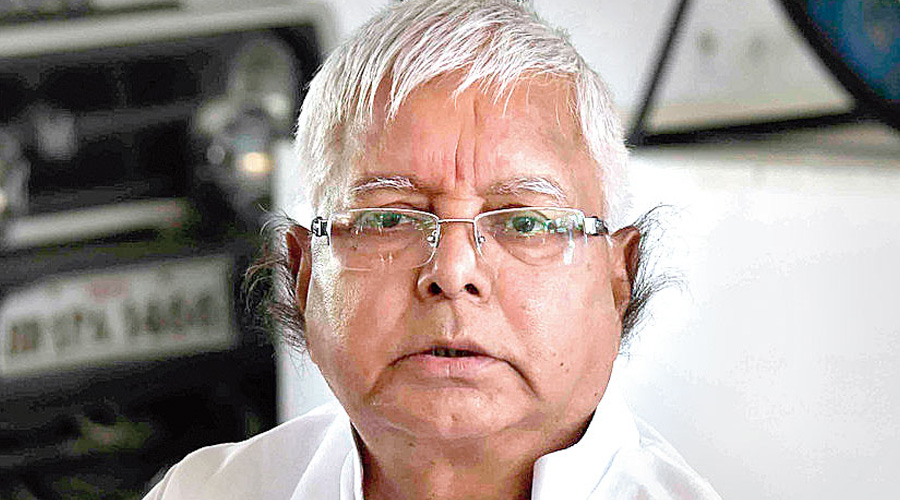 “At present there is a need to take much care of Laluji’s health. This is also the time of Covid. He is currently under the supervision of doctors and we are in touch with them. He could return to Patna very soon… after a few days,” Tejashwi, RJD leader and former deputy chief minister, told mediapersons at Patna airport after arriving from New Delhi on Wednesday.

Tejashwi had been in the national capital for the last two months, having gone there soon after his father was released on bail while being treated at the All India Institute of Medical Sciences (AIIMS) under incarceration.

“Neta ke saath hum beta bhi hain (I am a leader as well as a son),” Tejashwi said, when asked about his absence from the political scene during the second wave of the Covid-19 pandemic.Lalu served close to four years in prison in Ranchi before getting bail in the fodder scam cases and has been away from Bihar for over three years. The last time he was here was on parole to attend his eldest son Tej Pratap Yadav’s wedding in May 2018.

Leaders of the Grand Alliance said that the return of the RJD chief would boost their enthusiasm and rock the boat of the ruling National Democratic Alliance (NDA).

“Laluji’s return to Bihar will change the condition and direction of politics in the state. The NDA government is not comfortable numerically in the Legislative Assembly. Moreover, its constituent parties — the BJP, chief minister Nitish Kumar’s JDU (Janata Dal United), HAMS (Hindustani Awam Morcha Secular) and Vikassheel Insan Party — are constantly bickering with each other,” RJD spokesperson Mritunjay Tiwary told The Telegraph.

The Congress expressed happiness and said that Lalu’s arrival in Bihar will give impetus to the Opposition.

“Laluji is the tallest leader of Bihar. His party has more MLAs than any other party in the Assembly. His return to the state will make the RJD more active, give momentum to the Opposition and widen its role. We are happy that he is coming back,” Congress MLC Prem Chandra Mishra told this newspaper.

Mishra asserted that the NDA was going to implode in the state due to its internal conflicts and dissatisfaction among the constituent parties.

“We are going to see a new political equation in the state within a couple of months. Only 12 MLAs are needed to dispose of the present ruling dispensation. Some are even in touch with our Grand Alliance,” Mishra said.

The NDA scraped through in the 2020 Assembly elections with a thin majority. At present it has 126 MLAs and a support of an independent MLA taking the tally up to 127 in the 243-member House.

The BJP has 74 MLAs, JDU 44, while the HAMS and VIP have four legislators each in the Assembly.

On the other hand, the Opposition Grand Alliance has 110 MLAs. The RJD leads with 75 MLAs, the Congress has 19, the CPI-ML 12, while the CPI and CPM have two each.

Asaduddin Owaisi’s AIMIM has five MLAs and is not attached to any of the alliances in the state. One seat in the House is vacant.

Numerically, any party or alliance having 122 legislators can form the government. However, in reality, even a shift of five or six MLAs from the NDA could lead to turmoil in the Nitish-led government.

Tejashwi attacked Nitish for turning a blind eye towards inflation and unemployment in Bihar. He also blamed the chief minister for engineering a revolt in the Lok Janshakti Party (LJP).

Asked about LJP founder and former Union minister Ram Vilas Paswan’s son Chirag, Tejashwi said: “Laluji once made Ram Vilas Paswan a member of the Rajya Sabha when he had no MLA or MP with him. My brother Chirag has to decide whether he wants to stay with M.S. Golwalkar of the RSS and his book Bunch of Thoughts, or with Babasaheb Bhim Rao Ambedkar who gave us the Constitution of India.”