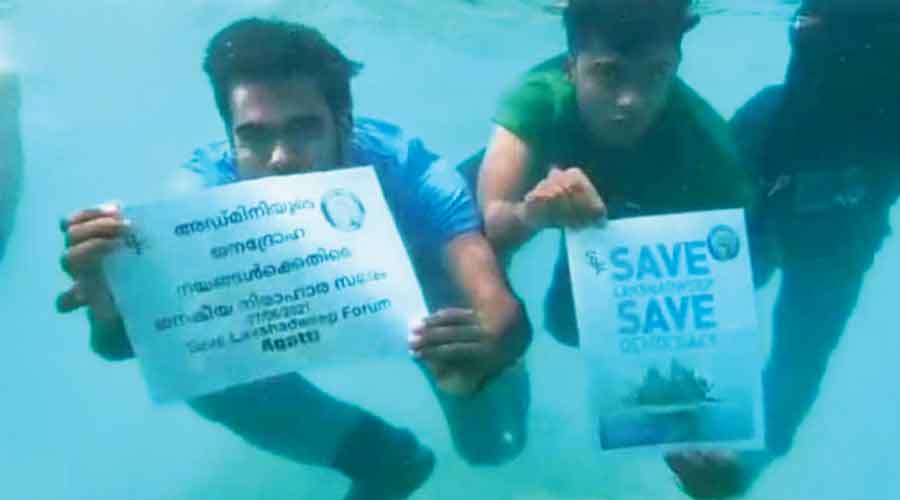 Residents of Lakshadweep observed a 12-hour hunger strike at their homes on Monday seeking the immediate withdrawal of a set of contentious legislations and the recall of controversial administrator Praful Khoda Patel.

Since Covid protocol did not allow them to step outside their properties, 68,000 residents in 10 of the 36 islands off the Kerala coast observed a dawn-to-dusk hunger strike wielding placards and banners raising their demands. Only medical shops remained open while the isles remained shut during the protest.

While no untoward incidents were reported in the peaceful demonstration, police removed panchayat members who opted for a sit-in at the panchayat office in Kavaratti, the headquarters of the isles.

“We started our sit-in at the panchayat office at 9am. It was very peaceful as we just held placards raising our demands. But police came around 11am and bundled us into their vans and dropped us at our homes unmindful of our requests to allow our basic rights to protest,” Kavaratti village panchayat member Thaha Malika of the Congress told The Telegraph.

“When we repeatedly asked the police officers for the reason to remove us, they said they had ‘orders from the top.’ This is a blatant violation of our constitutional rights,” Malika who, like other ward members, then joined their respective families in the hunger strike at their homes.

He said some youths protested underwater holding placards against the reforms and the administrator.

Kasim Meharouf, village panchayat member of Chetlat, one of the smallest islands in the archipelago, told this newspaper that the strike was a total success. “Everyone of the 2,500 residents of Chetlat participated in the hunger strike. Even children joined us in this peaceful protest against the draconian laws that the administrator is trying to bring,” Maharouf, who belongs to the Nationalist Congress Party, said.

“Fishermen participated in the hunger strike, too. Not a single boat ventured out in the seas for fishing today (Monday). We are all united in this as this is a matter of life and death for us,” he added.

The administration has already pulled out beef from school mid-day meal menu in the islands where a huge majority of the residents are Muslims categorised as Scheduled Tribes. It had shut down dairy farms to usher in Gujarat-based Amul and taken steps to sever the islands’ umbilical cord with Kerala that the residents call ‘mainland’ by linking it with Mangalore in BJP-ruled Karnataka.

While the LDAR empowers the administration to take over anyone’s land at a short notice, the Goonda Act empowers the police to detain anyone for a year without trial. The animal preservation act will end cattle slaughter. The amendment to the panchayat act has a two-child norm for all those contesting in the local body polls.

P.P. Rahim, local committee member of the CPM in Kavaratti, told this newspaper that protests would continue until the administration heeded people’s concerns. “We don’t want these anti-people legislations. There is no going back on that,” he said.

Rahim drew attention to how the ongoing Covid-19 lockdown had left scores of families with no income. “People are unable to go out and earn their livelihood. But unlike mainland Kerala, we are not even getting food ration kits.”

The CPM, he said, has been providing dry ration kits to the poor.