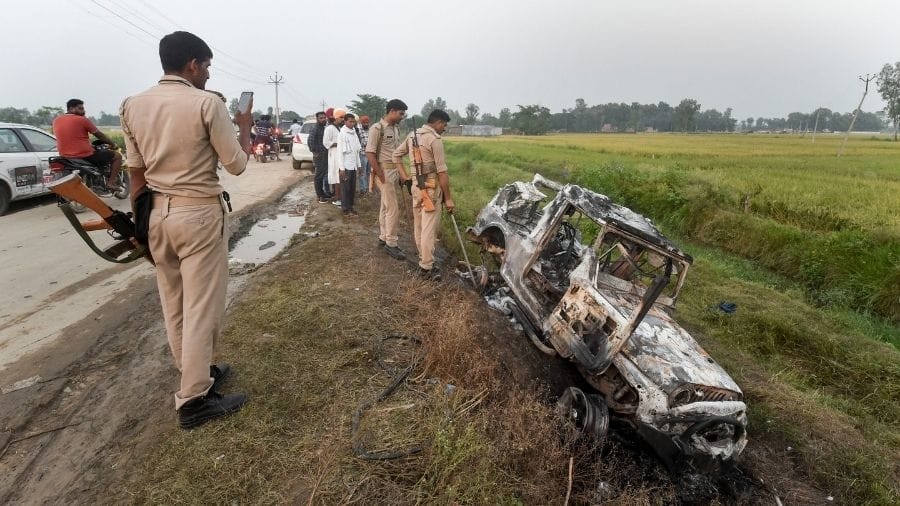 The Uttar Pradesh authorities on Tuesday agreed to the demand for a second post-mortem of a farmer killed in the Lakhimpur Kheri incident after his family refused to cremate him, while mortal remains of the three others were consigned to flames at their native places during the day.

Family members of Gurvinder Singh (22) of Moharia village of Bahraich had refused to cremate him till a second autopsy is done, claiming that he was shot dead. They received support from farmer leader Rakesh Tikait and Punjabi singer Sonia Maan, who arrived in the village this evening.

Senior district administration officials confirmed that the second post-mortem of Gurvinder will be conducted at the district hospital.

They said a vehicle has been sent to bring the body to the hospital post-mortem house.

A team of experts has arrived at Bahraich district police line from capital Lucknow by helicopter for the autopsy, they said.

Additional Director General of Police (Gorakhpur) Akhil Kumar and other senior civil and police officials had come to Moharia village to persuade the family to perform the last rites but when his kin and farmer leaders did not relent, a decision for a second autopsy was taken.

"We don't want to conduct his last rites after a false post-mortem report," a relative said.

Gurvinder's family said that Congress General Secretary Priyanka Gandhi Vadra, who is under detention in Sitapur, talked to his father over the phone.

Maan accused the UP government of creating "pressure" through the district administration on the family.

"The body will not be sent for last rites till a second post mortem is performed in Delhi," she said earlier.

The mortal remains of the three other dead farmers, who were mowed down by a vehicle during a protest in Lakhimpur Kheri, were cremated at their native places.

Among the farmers killed in the Sunday incident, two each were from Lakhimpur Kheri and Bahraich and the bodies were handed over to their families after a post mortem on Monday.

The families of Lavpreet Singh (19), Nachattar Singh (65)and Daljeet Singh (42) agreed to the cremation after hours of negotiations involving police officials and farmer leader Rakesh Tikait.

Tikait was present when Satnam Singh performed the last rites of his son Lavpreet Singh in the family's agricultural field in Palia tehsil in Lakhimpur Kheri late in the afternoon.

The mortal remains of Nachattar Singh of Dhaurahra tehsil in Lakhimpur Kheri were consigned to flames by his son Mandeep Singh, who is posted in Sashastra Seema Bal (SSB).

In Bahraich, the family members of Daljeet Singh performed his last rites.

Four of the dead were farmers who were allegedly knocked down by vehicles driven by BJP workers.

The four others included two BJP workers, one driver of Union Minister of State for Home Ajay Kumar Mishra and Raman Kashyap, a journalist working for a private TV channel.

While the first three were lynched by agitating farmers, the scribe, according to his father, died after being hit by a vehicle when he was covering news of farmers' protest against the visit of UP Deputy Chief Minister Keshav Prasad Maurya to Ajay Mishra's native place Sunday.

The UP Police has lodged a case against Union minister Ajay Mishra's son but no arrest has been made.

Additional Director General (Law and Order) Prashant Kumar announced on Monday that the government will order a probe headed by a retired high court judge and give compensation of Rs 45 lakh each to the families of the dead farmers. Their kin will also get a government job.

The injured will get Rs 10 lakh.