Advertisement
Home / India / Lakhimpur Kheri incident condemnable, but such issues happen elsewhere too: Sitharaman
'We must speak up about other similar incidents too'

'I would like you to raise it at every time when it happens, not just raise it when it suits us because it's a state where BJP is in power' 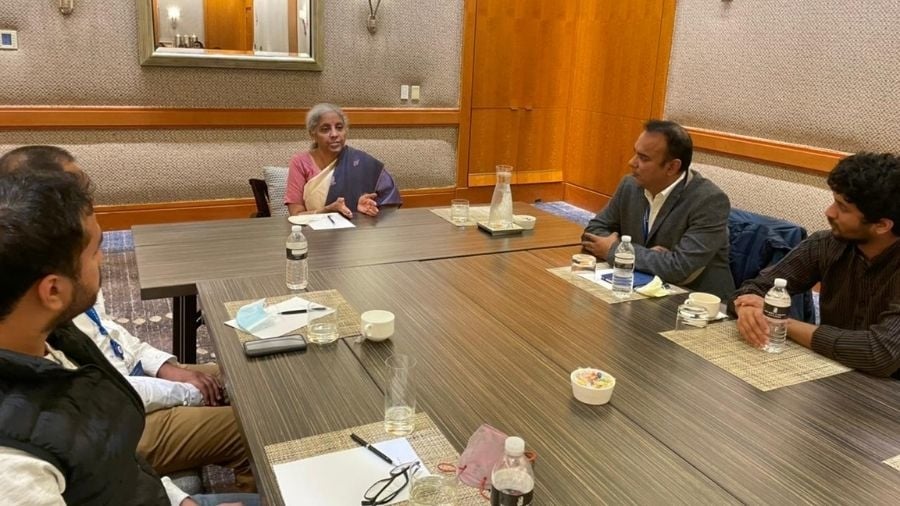 The Lakhimpur Kheri violence, in which four farmers were killed, is absolutely condemnable, Finance Minister Nirmala Sitharaman has said, emphasising that there are issues of such nature happening in other parts of India equally which should be raised "when they happen and not when it suits others" because there is a BJP government in Uttar Pradesh.

Sitharaman, who is on an official visit to the US, was responding to a question during a conversation at Harvard Kennedy School on Tuesday about the killing of four farmers in Lakhimpur Kheri and the arrest of Ashish Mishra, son of Union Minister of State for Home Ajay Mishra.

She was asked why there is no word on this from the prime minister, senior ministers and why there is a defensive reaction when somebody asks questions about such things.

"No, absolutely not... It's nice of you to have picked up that one incident which is absolutely condemnable, every one of us say that. Equally there are instances happening elsewhere, is my concern.

"India has issues of such nature happening in very many different parts of the country equally. I would like you, and many others, including Dr Amartya Sen, who all know India, to raise it at every time when it happens, not just raise it when it suits us because it's a state where BJP is in power, one of my cabinet colleague's son is in probably trouble, and also assume that it's actually them who did it and not anybody else. Due course of justice will also have a complete inquiry process to establish it," she said.

Ashish Mishra was named in an FIR following allegations that he was in one of the vehicles that mowed down four farmers protesting over UP Deputy Chief Minister Keshav Prasad Maurya's visit on October 3.

To a question on the farmers' protests, Sitharaman said that the three acts which the government brought in were discussed by the various parliamentary committees over a decade.

She said all the three acts have been discussed variously by the State governments, by the Center after the BJP came into power in 2014.

"This has been in the making for a decade now. Every stakeholder has been consulted," she said.

"When the farm laws were brought in the Lok Sabha, there was an elaborate discussion and the agriculture minister gave his reply as well. It was only when it came to the Rajya Sabha, there was a lot of noise and disturbance," she said.

Thousands of farmers from Punjab, Haryana and several other states have been protesting on various borders of Delhi since November 26 last year, seeking repeal of three farm laws enacted in September.

Dubbing these laws as "anti-farmer", these farmers claim that the newly enacted legislations would pave the way for the dismantling of the minimum support price system, leaving them at the "mercy" of big corporations.

She said the government has been saying that it is willing to talk with the protesters and has been engaging with them.

"Till date, we have not had even one particular aspect which is being questioned. And therefore, the protesters are not sure on what score they are protesting, what is it that they are objecting.

"Then there's this issue about the minimum support price to be given to farmers," she said, adding that the MSP are announced well in time and the farmers can decide whether they want to grow a crop or not and they can otherwise choose to grow something else.

She said once the farmers choose to grow any of these, for which a minimum support price is announced and procurements are done, through direct benefit transfer using technology, money is deposited as a lump sum into their accounts.

The highest amount of procurement, the largest ever payment per farmer under the minimum support price which is declared has happened in the last seven years after Prime Minister (Narendra) Modi has come. Highest ever.

Highlighting that there are recorded conversations which you can see of farmers even from Punjab, even from Haryana , she said farmers have got the entire amount into their account.

"This is verifiable, not a claim which I'm making. You can go and check it out. Highest amount and the entire amount is given into the account directly the day after procurement is done. No staggering, no delaying," she said.

"So we have not been told what it is that they're protesting against as yet and the minister is willing to talk even today," she added.