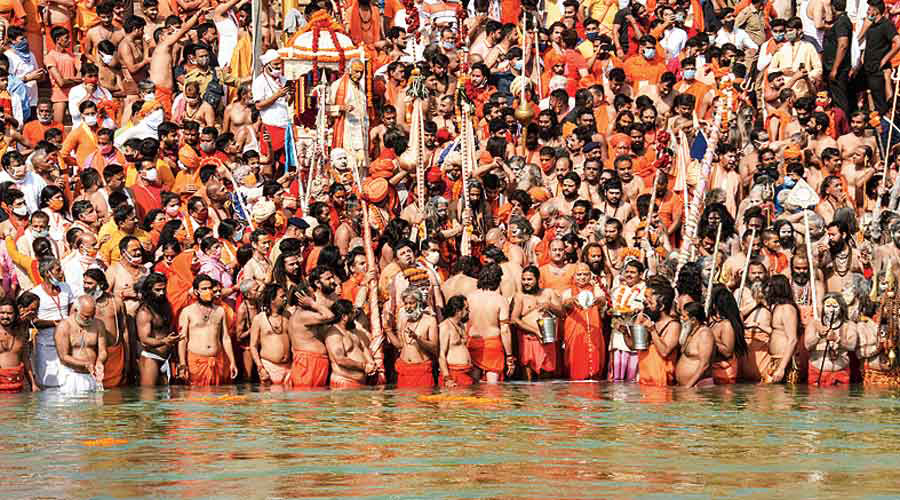 Twenty-three Kumbh mela returnees have so far tested positive for Covid-19 in Odisha.

While 13 were found to be infected with the virus while undergoing RT-PCR tests at the Cuttack railway station the rest who have tested positive belong to Rayagada in southern Odisha. So far 70 people have returned to the state from Kumbh and all are in self-isolation.

“We are keeping a close watch on these people. Special squads have been deployed at all the railway stations to ensure that those returning from Haridwar undergo the corona test mandatorily.

“As per the official records more than 400 people from the state had gone to Kumbh mela to take a holy dip in river Ganga,” said officials, adding that passengers coming from Haridwar need to produce the RT-PCR negative reports not more than 72 hours-old.

Meanwhile, Bhubaneswar Municipal Corporation (BMC) has made RT-PCR negative reports mandatory for passengers de-boarding at the Biju Patnaik International Airport to prevent the rise of covid cases in the city.

Keeping in mind the exponential rise in corona cases the BMC has also announced to keep all the religious institutions closed for devotees from Wednesday.

Only daily rituals will be allowed to be carried out in them.

“All religious institutions, including temples, mosques, churches will be closed for the devotees for the time being. Once the situation improves, the restrictions will be eased,” said BMC commissioner Prem Chandra Chaudhary. In Puri, the 12th Century Shree Jagannath temple is open for devotees but devotees from outside the state have to produce RT-PCR negative reports.

With reports of five more deaths, the death toll in the state reached to 1,953 on Tuesday. While the situation in the coastal belt of Odisha is grim, the condition in western Odisha districts adjoining Chhattisgarh has worsened further despite the night curfew.

“As people from districts adjoining Chhattisgarh are frequently visiting Raipur and other cities of Chhattisgarh, the corona cases in the bordering areas are increasing alarmingly. Besides, people coming from Covid hotspot states are also instrumental in the rise of positive cases in Odisha,” director Institute of Life Sciences (ILS) Ajay Parida told reporters.

Parida further maintained that Odisha need not worry much as the virus mutants of Brazil and South Africa have not been found here.

“Only three to four per cent cases of double mutation of Covid variant of the United Kingdom have been found here,” Parida maintained.