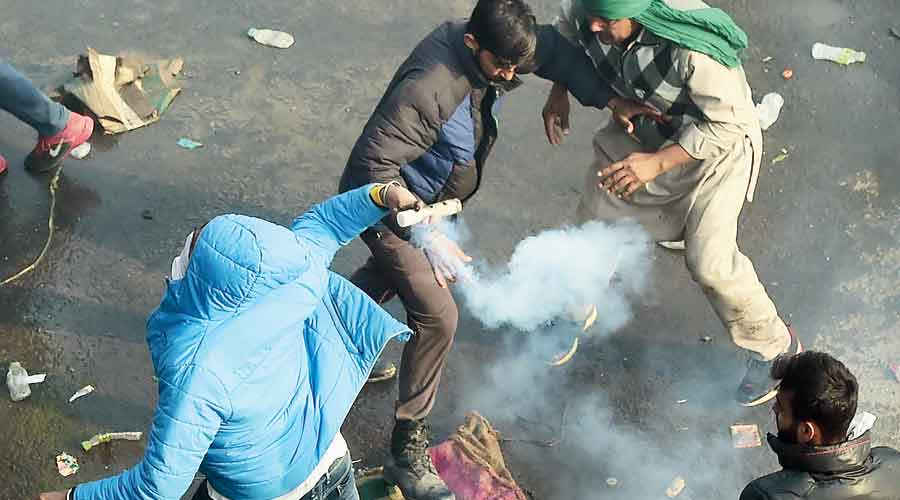 Farmers' collective Samyukta Kisan Morcha has alleged that "antisocial" elements, like actor Deep Sidhu, attempted to "torpedo" their peaceful agitation as per a “conspiracy”, but asserted they would not allow "the government and other forces inimical to the peaceful movement to break this struggle".

The morcha, which represents 41 farmer unions, called an emergency meeting later on Wednesday to decide the future course of action.

Earlier in the day, Delhi Police announced they had registered 22 FIRs detailing Tuesday’s the violence and specifying injuries and damage to property. The FIRs claimed that six Delhi Transport Corporation (DTC) buses and 70 iron barricades were damaged when over 10,000 protesting farmers on nearly 600 tractors stormed the area.

Union Home Minister Amit Shah also took stock of the security situation and measures taken to ensure peace in the city at a meeting with Union home secretary Ajay Bhalla, and senior officers of the ministry and Delhi Police.

Referring to the violence during Tuesday's tractor rally, the farmers’ morcha slammed actor Deep Sidhu and Kisan Mazdoor Sangharsh Committee, alleging that they attempted to torpedo the farmers' agitation.

In a statement, the morcha said, “The Union government has been severely shaken by this peasant agitation. Therefore, a dirty conspiracy was hatched with Kisan Mazdoor Sangharsh Committee and others against the peaceful struggle of other farmer organisations, who had set up their own separate protest site after 15 days of beginning of this farmers' agitation. They were not part of the organisations which jointly undertook the struggle."

The Samkyukt Kisan Morcha is leading the protest against the three central farm laws at several border points of Delhi.

"Under this conspiracy, the said Kisan organisation and other persons announced that they would march on Ring Road and unfurl a flag on the Red Fort. As a corollary of conspiracy, the Kisan Mazdoor Sangharsh Committee started marching on the Ring Road, two hours before the scheduled march of the struggling organisations. It was a deep rooted conspiracy to knock down the peaceful and strong farmers' struggle," the statement said.

The morcha appealed to farmers to stay at the protest venues and continue their struggle peacefully.

"We will not allow the government and other forces inimical to the peaceful movement to break this struggle. Yesterday's events exposed and isolated the anti-farmer forces clearly. An emergency meeting of 32 organizations is called today (Wednesday) to chalk out the future programme," he said.

Tens of thousands of farmers, most of them on tractors broke barriers to storm the national capital on Tuesday to highlight their demands. But the tractor parade dissolved into unprecedented scenes of anarchy as farmers fought with police, overturned vehicles and  hoisted a religious flag from the ramparts of the Red Fort.