On the anti-CAA protests, Modi accused the Congress and the Left of inciting people 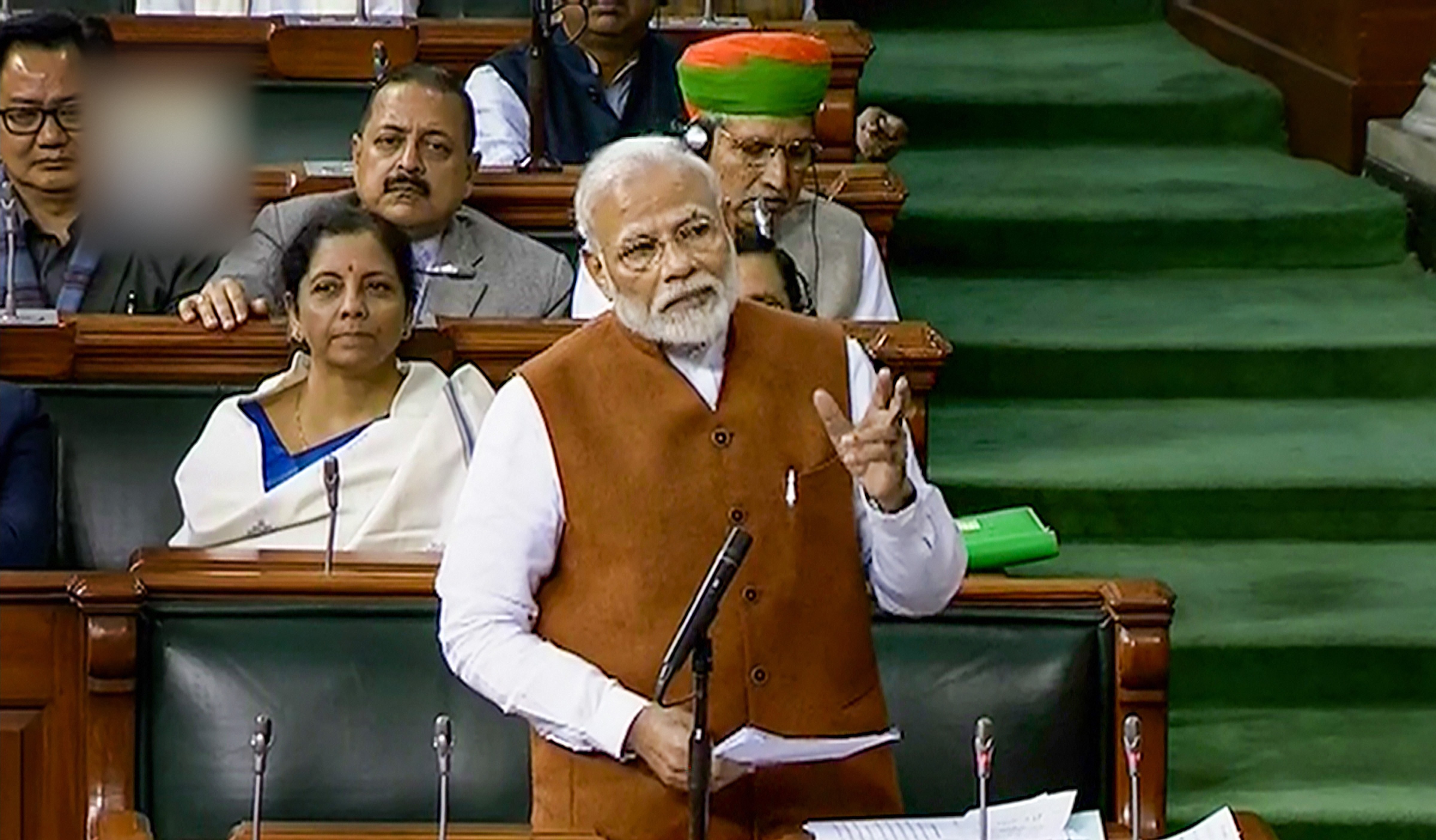 Kashmir's identity was buried on January 19, 1990, when Kashmiri Pandits started leaving the Valley due to militancy, Prime Minister Narendra Modi said on Thursday, slamming former Jammu and Kashmir chief ministers Mehbooba Mufti and Omar Abdullah for their remarks on abrogation of special provisions of Article 370.

Amid anti-CAA protests in the country, Modi accused the Congress and the Left of inciting people at protest sites.

Replying to a debate on Motion of Thanks to the President's Address in Lok Sabha, Modi also attacked the Congress for its politics in the last seven decades, saying the party's politics of last 70 years has been such that no Congress leader can be self-sufficient.

'The people of India saw our work for five years. They once again blessed us, so that we work even faster,' he said.

Modi said India can no longer wait for problems to remain unsolved, and, rightfully so. 'That is why, our aim is speed and scale, determination and decisiveness, sensitivity and solutions'.

'The people of India have not only changed the Sarkar (government). They want the 'Sarokar' (conduct) to be changed as well. If we had worked according to the old ways and thought processes: Article 370 would never have been history. Muslim women would have kept suffering due to Triple Talaq,' he said.

The Prime Minister said if his government worked as per the old ways, the Ram Janmabhoomi issue would have remained unsolved, Kartarpur Sahib corridor would not be a reality and there would be no India-Bangladesh land agreement.

Modi said the Congress did not remember to save the Constitution during Emergency and the 'Save Constitution' mantra is must 'for those who dismissed several state governments'.

Without naming Rahul Gandhi, Modi said, 'I heard an Opposition MP saying- we will beat Modi with sticks in 6 months. I have also decided I will do more 'Surya Namaskar'. This will make my back even stronger to face abuses. In any case, I have been abused so much for the last two decades that their negativity hardly matters'.

On the economy, the Prime Minister said the government has kept the fiscal deficit in check, price rise is also under check and there is macro-economic stability.

The Prime Minister said driven by politics, some states are not allowing farmers to benefit from the PM-Kisan Scheme.

'I appeal to them: let there be no politics in farmer welfare. We all have to work together for the prosperity of farmers of India,' he said.

He said, 'the PM-Kisan Samman Yojana is transforming the lives of many farmers. Several farmers have benefited due to this. In this scheme there are no middlemen and no extra file work.'

Referring to the Northeast, Modi said, 'for years, distance became a reason to ignore this region. Things have changed now and the region is becoming a growth engine as great work has been done in so many sectors and ministers and officials are regularly visiting the Northeast. Despite many efforts, the issue was unsolved for years. Whatever was done earlier was for meeting political ends, remained confined to papers.'

'The Bodo Accord signed now is special because it has brought all stakeholders together and we are moving towards a more peaceful era,' he said.

At the beginning of his speech, some Congress MPs raised slogans hailing Mahatma Gandhi with party leader Adhir Ranjan Chowdhury saying, 'it is just a trailer'.

At this Modi shot back: 'Mahatma Gandhi may be trailer for you, but he is life for us'.