Bond row over release of a few 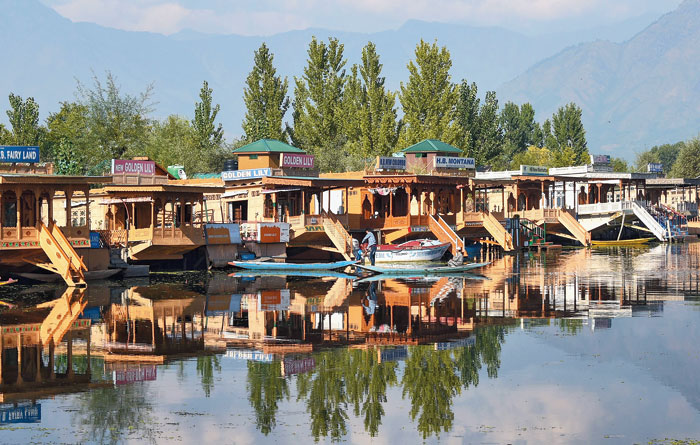 Empty shikaras at the Dal Lake on Thursday. Dozens of VIP politicians including three former chief ministers — Farooq Abdullah, Omar Abdullah and Mehbooba — were arrested or put under house arrest as a precaution ahead of the revocation of the state’s special status on August 5.
PTI
Muzaffar Raina   |   Srinagar   |   Published 10.10.19, 09:27 PM

The Jammu and Kashmir administration’s decision to quietly release a few VIP detainees has triggered a row with former chief minister Mehbooba Mufti’s daughter claiming they were forced to sign bonds before being set free.

Iltija castigated the “conditional release” but did not specify what undertaking the bonds implied. A government official said the politicians had to sign a routine bond promising to maintain peace but did not explain what this entailed.

Dozens of VIP politicians including three former chief ministers — Farooq Abdullah, Omar Abdullah and Mehbooba — were arrested or put under house arrest as a precaution ahead of the revocation of the state’s special status on August 5.

Officials said the former People’s Democratic Party MLA from Batmaloo, Noor Mohammad, had been released from the Centaur Hotel, which has been turned into a sub-jail. Most of the VIP politicians barring the three former chief ministers have been lodged in the hotel.

Sources said the government had during the past fortnight lifted the curbs on the movements of two former MLAs, Shoaib Lone and Yawar Mir, who had been under house arrest.

A source said Noor Mohammad’s daughter was about to get married and this could be the reason he had been released.

One of the freed politicians refused to talk to the media, saying he wanted to stay away from any controversy.

lltija, among a handful of prominent voices from the Valley who are campaigning against the removal of the state’s autonomy and the security clampdown, pointed a finger at the government.

“Reports say detainees released today were forced to sign bonds. Under what law is their release conditional as their detention was illegal itself?” she tweeted.

Iltija, who handles Mehbooba’s Twitter account and is staying in Delhi, claimed that many among the prisoners, including her mother, had “categorically” refused to sign these bonds. “The government with its rudderless approach is tying itself in knots,” she said.

“A democratic India that always fought for the principles of liberty & equality is today being questioned & castigated for its brutal actions in Kashmir internationally. Governments will come & go but what about the damage done to the reputation & moral fabric of this country.”

A government official said the politicians had not signed any special bond except the one prescribed under “Section 107” of the Jammu and Kashmir Criminal Procedure Code.

“They are supposed to maintain peace and (be on) good behaviour,” he said.

Sources said it was unclear what constituted good behaviour and whether maintaining peace meant they could not criticise the revocation of the state’s special status.

Iltija had earlier accused the government of threatening to book the jailed political leaders under the Public Safety Act, which allows detention without trial for up to two years, if they challenged their detention in the courts.

None of the political detentions, barring those of Farooq and IAS officer turned politician Shah Faesal, has been challenged legally.