Wearing the headscarf is not an essential religious practice in Islam and uniform is a reasonable restriction on the freedom of speech and expression, rules HC 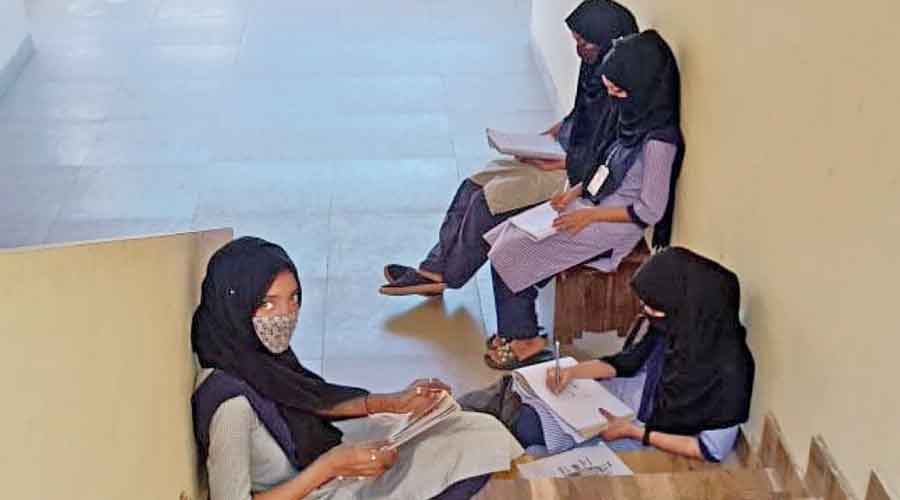 The four hijab-clad girls, who were denied entry into classes in the Government Pre-University College in Udupi, taking notes from a staircase of the college building.
File photo
K.M. Rakesh   |   Bangalore   |   Published 16.03.22, 02:52 AM

Karnataka High Court on Tuesday upheld the ban on the hijab in classrooms, ruling that wearing the headscarf is not an essential religious practice in Islam and uniform is a reasonable restriction on the freedom of speech and expression.

Dismissing the petitions filed by six students, a bench of Chief Justice Ritu Raj Awasthi and Justices Krishna S. Dixit and J.M. Khazi said the government was within its rights to issue an order empowering schools and colleges to prescribe uniform for students.

The court considered the following four questions to arrive at its conclusions.

⚫ Whether wearing the hijab/headscarf is part of the essential religious practice in Islamic faith, protected under Article 25 of the Constitution (freedom of conscience and free profession, practice and propagation of religion).

“We are of the considered opinion that the wearing of the hijab by Muslim women does not form a part of the essential religious practice in Islamic faith,” the chief justice said while reading out the operative part of the verdict.

⚫ Whether prescription of school uniform is not legally permissible as being violative of the petitioners’ fundamental rights inter alia guaranteed under Article 19 (1) A, that is freedom of expression, and Article 21,  that is privacy, of the Constitution.

“We are of the considered opinion that the prescription of the school uniform is only a reasonable restriction constitutionally permissible, which the students cannot object to,” the court ruled.

⚫ Whether the (state) government order dated 5-2-2022,  apart from being incompetent, is issued without application of mind and further is manifestly arbitrary and, therefore, violates Articles 14 (equality before law) and 15 (no discrimination on the ground of religion) of the Constitution. (The government order had empowered educational establishments to prescribe uniforms.)

“We are of the considered opinion that the government has power to issue the impugned government order dated 5-2-2022 and no case is made out for its invalidation,” the court said.

⚫ Whether any case is made out… for issuance of a direction for initiating disciplinary inquiry against respondents 6-14 and for issuance of a writ of quo warranto against respondent number 15 and 16? (Respondents 6-14 are the principal and some teachers of the Government Pre-University College, Udupi, where the hijab row started in late December with the school authorities denying permission for hijab-clad girls from entering classrooms. Respondent 15 is BJP leader and Udupi MLA Raghupathi Bhat who is the chairman of the college development committee and Respondent 16 is Yashpal Anand Surana, vice-chairman of the committee. The committee was instrumental in taking the decision to ban the hijab in the college.)

The court ordered no disciplinary action against the principal and the teachers.

Later in the day, a Muslim student filed a plea in the Supreme Court challenging the Karnataka High Court verdict.

Sources close to the six students of the Udupi college who petitioned the high court said they were consulting their lawyers to take a decision on filing an appeal before the Supreme Court.

In its 129-page judgment, the court described the concept of uniform as a system to make campuses secular. “The school regulations prescribing dress code for all the students as one homogenous class serve constitutional secularism,” the court said.

“Prescription of school dress code to the exclusion of the hijab, bhagwa, or any other apparel symbolic of religion can be a step forward in the direction of emancipation and, more particularly, to the access to education. It hardly needs to be stated that this does not rob off the autonomy of women or their right to education inasmuch as they can wear any apparel of their choice outside the classroom,” the court said.

“At the outset, we make it clear that, in these cases, our inquiry concerns the nature and practice of wearing the hijab among Muslim women and therefore, references to the Holy Quran and other sources of Islamic law shall be confined to the same,” the court noted.

The court banked upon The Holy Quran: Text, Translation and Commentary by Indian scholar Abdullah Yusuf Ali, “there being a broad unanimity at the Bar as to its authenticity and reliability”.

The judgment quoted from Ali’s book:  “Compulsion is incompatible with religion because religion depends upon faith and will, and these would be meaningless if induced by force….”

That the “hijab is a veil ordinarily worn by Muslim women is true”, the court concluded on the question whether it is specific to Islam.

The court then quoted further from Ali’s book:  “…In the wording, note that for Muslim women generally, no screen or hijab (purdah) is mentioned, but only a veil to cover the bosom, and modesty in dress. The screen was a special feature of honour for the Prophet’s household, introduced about five or six years before his death….”

“Thus, there is sufficient inartistic material within the scripture itself to support the view that wearing the hijab has been only recommendatory, if at all it is,” the court said in the order.

“The Holy Quran does not mandate the wearing of the hijab or headgear for Muslim women. Whatever is stated in the above suras, we say, is only directory, because of the absence of prescription of penalty or penance for not wearing the hijab…,” the court noted.

The court took a  serious note of “unseen hands” in the hijab row in the state that saw weeks of protests. “The way the hijab imbroglio unfolded gives scope for the argument that some ‘unseen hands’ are at work to engineer social unrest and disharmony,” the court stated without naming any group.

Chief minister Basavaraj Bommai asked students to honour the court order and get back to classes. “I request all students to follow the high court order. Everyone should attend classes and appear for exams since your education is very important.”