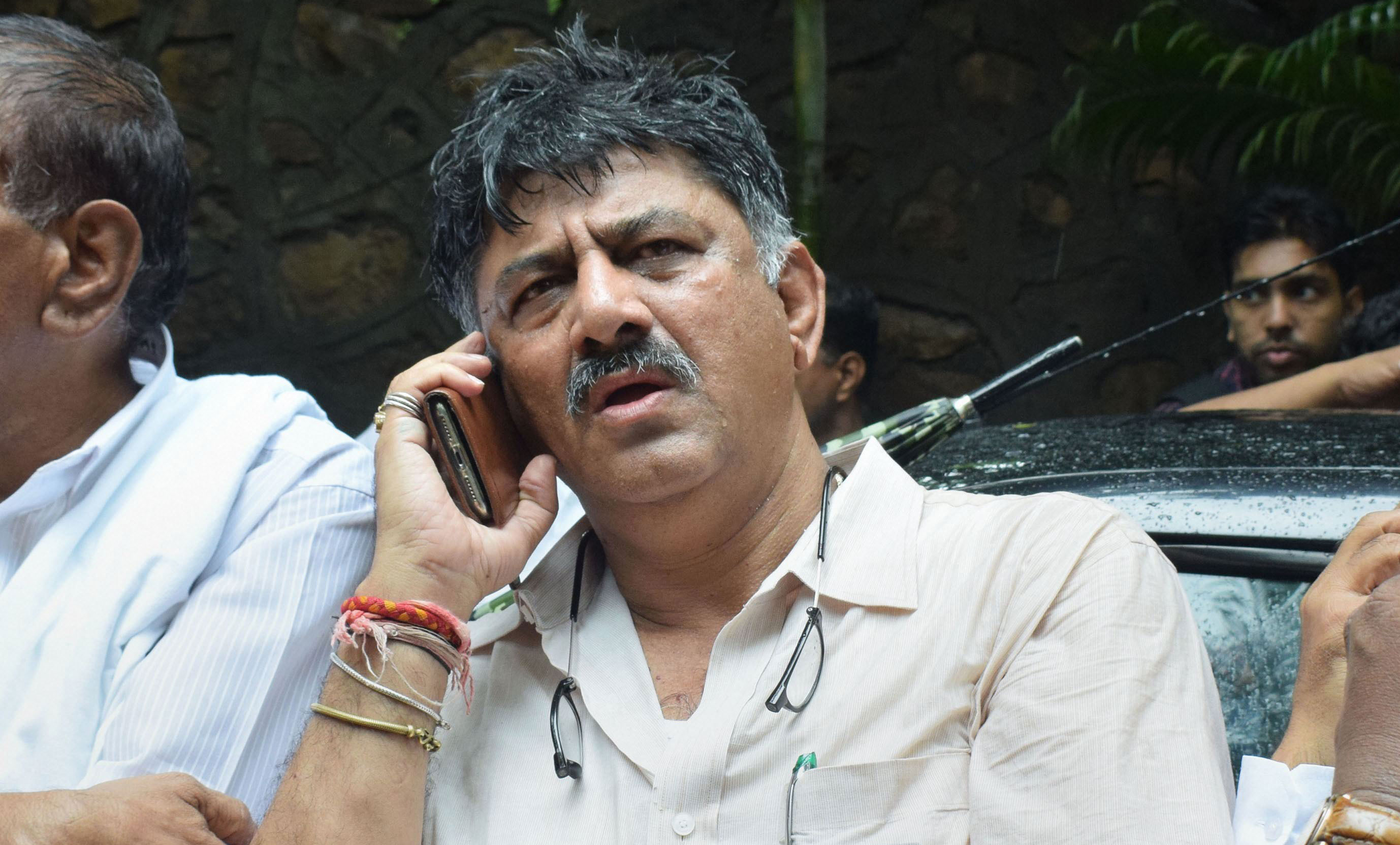 Karnataka minister D.K. Shivakumar and his Congress colleagues Milind Deora and Naseem Khan were detained on Wednesday outside a hotel where rebel MPs are holed up amid high drama and deepening uncertainty about the future of the state's ruling coalition.

Shivakumar, the Congress' troubleshooter, had been camping outside the Renaissance Hotel in Powai since morning, determined to meet the rebel MPs in a desperate bid to pull the Congress-JDS government from the brink of collapse.

Security personnel, camera crews, media personnel and political workers jostled with each other outside the luxury hotel that has become the centrepiece of the crisis in Karnataka.

Slogans like 'Shivakumar go back' were raised and some people clambered on to the gates of the hotel on the outskirts of the city.

Shivakumar was being interviewed by a TV channel when he was almost pulled away by Mumbai Police and detained. Former Union minister Deora and former Maharashtra minister Khan who had come to meet him were also detained.

All three were taken to the BKC police guesthouse.

Shivakumar had reached the hotel at 8.20am but was stopped by police from entering. His plea that he had a valid reservation in the hotel fell on deaf ears.

Officials, it is learnt, told Shivakumar the rebel legislators had written to the Mumbai police chief that they feared a threat to their lives because of his arrival.

Shivakumar stood his ground and said that politics is an art of the possibility and he would not leave without meeting friends.

He told reporters he had 'come in peace' and had no intention of threatening the rebel MLAs.

He added that he had come unarmed and just wanted to have coffee with his friends. 'I don't want to harm anyone,' he said.

'I haven't brought any security force or weapon, I only have my heart with me. I want to meet my friends and have coffee with them. If the BJP is not involved then why are we not being allowed to enter,' he said.

An e-mail from the hotel to the travel agency which had booked a room on behalf of Shivakumar, disclosed that the reservation was cancelled due to 'some emergency'.

Ten of the 12 MLAs in the hotel have written to Mumbai Police, saying they feared a threat to their lives and Shivakumar should be prevented from entering the hotel.

Mumbai Police has imposed prohibitory orders near the hotel where the rebel Congress and JDS lawmakers from Karnataka are staying. The entire stretch leading to the hotel was lined with security personnel since Wednesday morning.

After standing for several hours with supporters holding aloft umbrellas, Shivakumar managed to sit precariously on the hotel boundary wall with his feet dangling over a storm water drainage opening.

'Mumbai has a good government. Chief minister (Devendra Fadnavis) is my good friend. I have booked a room here. My friends are here, some disputes are there, they are my friends....' he said.

Shivakumar noted that he had earlier played 'host to 120 MLAs from Maharashtra when Vilasrao Deshmukh was the chief minister'.

Twelve MLAs -- seven of the Congress, three of the JDS and two Independents -- are in the city since Saturday after resigning from the Karnataka Assembly and withdrawing support to the coalition government.

Of the 14 MLAs who have resigned, 11 are from Congress and three from JDS. The ruling coalition faces the threat of losing its majority if the resignations of the rebel MLAs are accepted.

With the support of the two independents, the BJP has 107 MLAs in the 224-member House, where the half-way mark is 113.

If the resignations of the 14 MLAs are accepted, the coalition's tally will be reduced to 102. The speaker also has a vote.

The Monsoon session of the Karnataka legislature would begin from July 12.