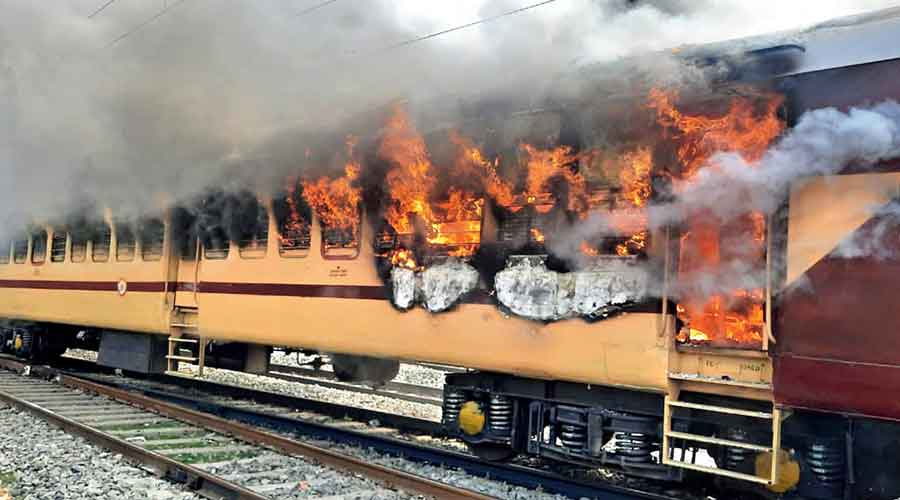 An empty passenger train set on fire at Gaya station on Wednesday by job-seekers protesting against alleged irregularities in the Railway Recruitment Board examination results.

The protests began on Monday and intensified on Tuesday. On Wednesday, candidates blocked railway tracks at several places across Bihar, throwing services out of gear. Different groups appeared suddenly on the tracks, disrupted the services and moved elsewhere. Stones were thrown at stations in Patna, Nalanda, Nawada, Buxar, Bhojpur, Sitamarhi, Samastipur and Begusarai. A large group blocked train traffic in Jehanabad, hoisted the national flag on the tracks, sang the national anthem, and burnt effigies of Prime Minister Narendra Modi and railway minister Ashwini Vaishnaw.

At many places, the police used lathicharge, tear gas and water cannons against the protesters. Many have been arrested since Monday. Protests erupted in election-bound Uttar Pradesh too. Vaishnaw announced a probe into the allegations of discrepancies in the results and appealed to the protesters not to damage railway property.

Congress leader Rahul Gandhi also appealed to the youths to shun violence while supporting their fight for their rights. “If Independence

can be won by non-violent protest, then why not rights?” he tweeted. Priyanka Gandhi demanded that the “arrested students be freed and the order to debar the protesters from railway jobs be taken back.”