Students want to meet the vice-chancellor and demand a withdrawal of the draft hostel manual, which they claimed has provisions for fee hike, dress code and curfew timings 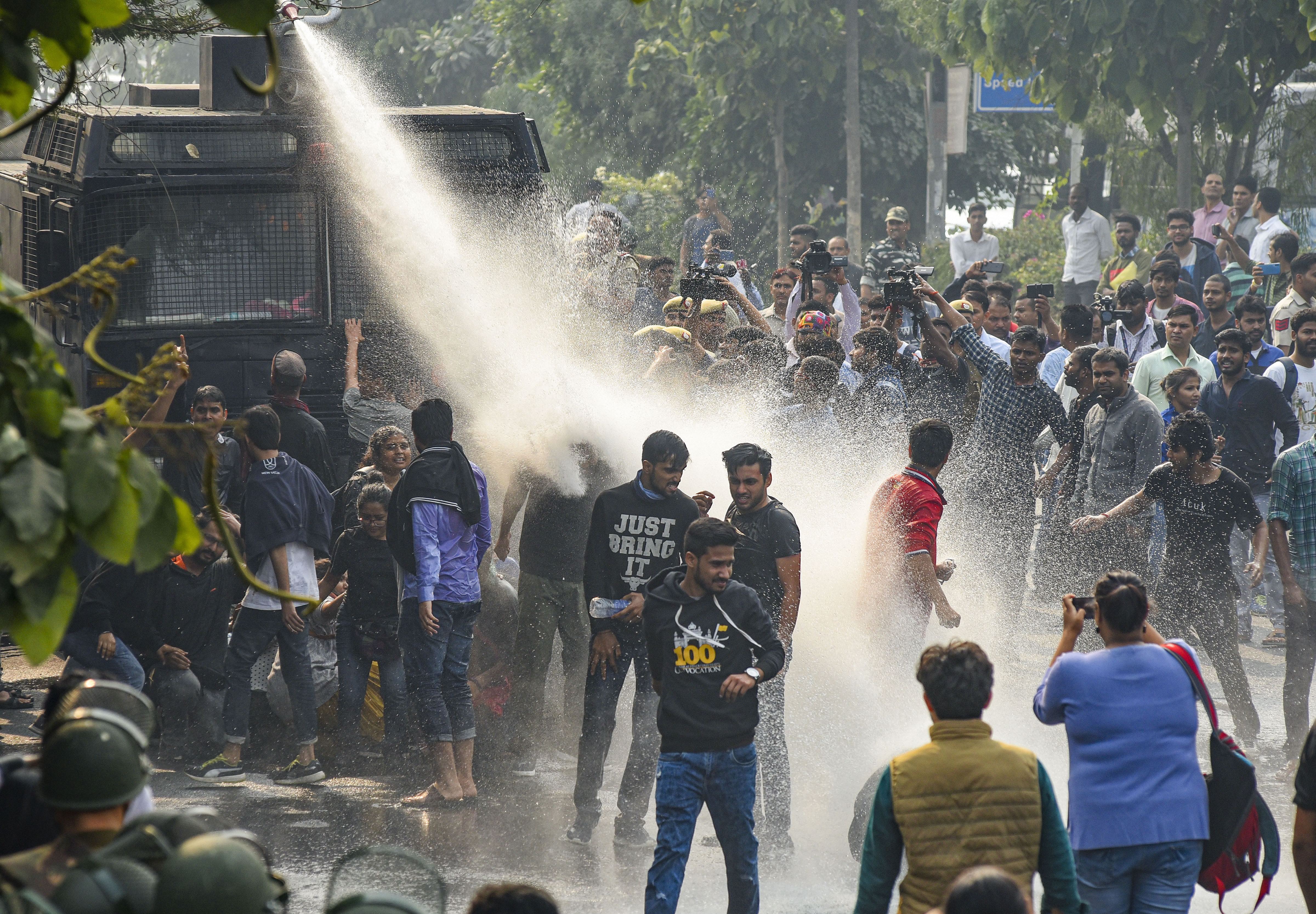 Thousands of Jawaharlal Nehru University (JNU) students clashed with the police on Monday outside the campus as they raised their voices against the administration's 'anti-student' policy.

Traffic came to a standstill around the area as Delhi police issued advised commuters to avoid the stretch.

'Traffic Movement is closed on Nelson Mandela Marg from PS Vasant Vihar to PS Vasant Kunj due to demonstration. Kindly avoid the stretch,' Delhi police said in a tweet.

Students marched towards the All India Council for Technical Education (AICTE), where vice-president Venkaiah Naidu was addressing the university's convocation at an auditorium.

The gates of the AICTE, around 3 km from the JNU, were locked and the security personnel were stationed in and outside the premises in wake of the protests that started in the morning. The students later reached the convocation area at around 11.30 am.

According to a senior officer, the students broke barricades and marched towards the auditorium. Some of the protesters have been detained.

The students were playing tambourine and raising slogans, with placards in their hands, calling vice-chancellor M. Jagadesh Kumar a 'thief'. 'Delhi police go back' slogans were also raised.

Human resource development minister Ramesh Pokhriyal was not able to come out of the venue, and the police are requesting the students to let him go, an officer said.

'JNUSU president Aishe Ghosh and vice-president Saket Moon were asked to talk to the students to make way for the HRD minister. Police requested the protesters to move from the gate, but they refused,' an officer said.

The JNUSU office-bearers met Pokhriyal who assured them that their demands would be looked into.

They were, however, not able to meet the vice-chancellor. The protesters were also raising slogans 'we want V-C'.

'Historic day for us that we broke the barricades, reached the convocation venue and met the minister,' Ghosh said. 'This could happen because we were united.'

The HRD minister has promised that students' union would be called for meeting to the ministry.

'We will have to ask the executive council members to reject the hostel manual in its upcoming meeting on Wednesday,' Ghosh said.

Students want to meet the vice-chancellor and demand a withdrawal of the draft hostel manual, which they claimed has provisions for fee hike, dress code and curfew timings.

The protest is part of the agitation against the hostel manual and several other issues like restrictions by the administration on entry to the Parthasarathy Rocks and attempts to lock students' union office, according to the students.

The students' union has been on a strike against the draft hostel manual, which was approved by the inter-hall administration. They have said the strike would not end till the hostel manual is withdrawn.