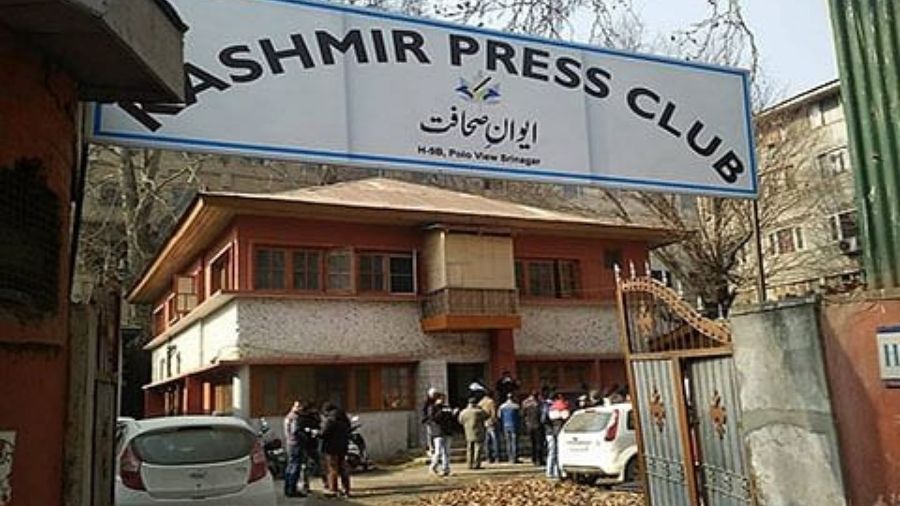 The Jammu and Kashmir administration has suspended the just-issued re-registration certificate of the Kashmir Press Club, derailing its impending elections to carry on with day-to-day activities and sparking allegations that efforts were afoot to take over or turn defunct one of the few pillars of resistance to iron-fist rule in the Valley.

According to official documents, the non-involvement certificate that forms part of the re-registration process appears to have been put on hold on the “basis of a report” from police, scuttling the KPC’s application for recognition.

The government has not officially clarified what the report is.

A non-involvement certificate, essential to receive any service or official permission in Jammu and Kashmir, is essentially a declaration that the applicant is not part of any anti-national or subversive activities.

The KPC, the biggest representative body of Valley journalists, was perhaps the only institution in the region that had remained relatively unscathed during the crackdown on dissent following the 2019 scrapping of the erstwhile state’s special status.

The press club had ruffled feathers in the government by opposing the onslaught against journalists and their functioning on several occasions, significantly at a time sections of the local media had turned pliant and chosen to act as the administration’s mouthpiece for fear of a backlash or a squeeze on ad revenue.

On Friday, the Registrar of Societies and Firms put the KPC’s re-registration in “abeyance”, just over a fortnight after issuing the certificate. The government order came a day after the KPC said it would hold its much-awaited elections to the body in February.

A member of the ad hoc body said the government had through its Friday order thrown a spanner in the works of the elections.

“We are already hearing that the government wants to capture the KPC, if possible, and hand over its control to friendly journalists or make it dysfunctional. We believe that it is journalists, and not the government, who can elect their representative body,” a KPC member told The Telegraph, requesting anonymity.

Official documents reveal that Srinagar’s additional district magistrate had issued the “non-involvement/ verification of character and antecedents” certificate of the KPC managing body on December 24, clearing the decks for its re-registration on December 29.

But on January 5, the ADM shot off a letter to the Registrar of Societies and Firms mentioning that the non-involvement certificate had been put on hold on the “basis of a report” received from the senior superintendent of police of the CID.

The Registrar of Societies and Firms in Friday’s order said its December 29 clearance to re-registration had been “kept in abeyance” till the Srinagar ADM issues the final report.

Sources in Press Club Calcutta said such non-profit entities needed to renew their registration annually under the Societies Registration Act but was not required to submit any non-involvement certificate.

A KPC spokesman said they had set in motion the process of electing a new executive committee on January 13 and announced February 15 as the tentative date for elections.

“The registration certificate was issued to the club following the due process and clearance mechanism, including the non-involvement/ verification of character and antecedents certificate which was issued by the office of the district commissioner/ district magistrate of Srinagar vide No. Dms/Jud/Soc/21/742 dated 24/12/2021,” the spokesman said.

“With the new unfortunate development, the registration of the society has been put on hold, which has advertently also stalled the election process for the new body that was set in motion,” he added.

The KPC said it had operated “with professionalism and integrity” and hoped it would be allowed “to function in the best interests of its members”.

When the KPC had announced on Thursday that it would hold fresh elections, a group of journalists, some of whom are close to the government, wrote to the Srinagar deputy commissioner, informing about the interim body “which will look after the day-to-day affairs and also take care of other allied matters of the Kashmir Press Club till elections are held”.

The letter claimed that the KPC was in a “mess” and urged the government to intervene.