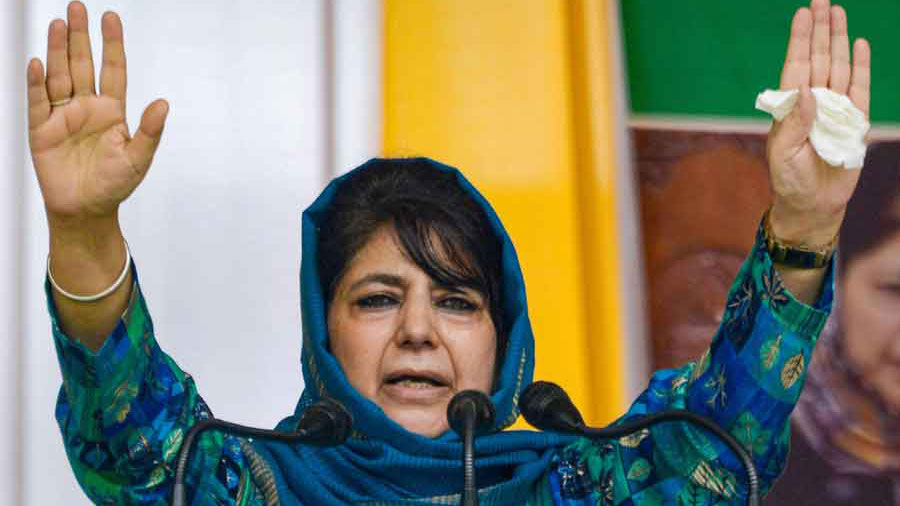 Accusing the BJP of converting Jammu and Kashmir into a "laboratory for its experiments", PDP president Mehbooba Mufti on Thursday said she has asked NC president Farooq Abdullah to convene an all-party meeting over poll authorities allowing outsiders to register as voters in the Union Territory.

Hours later, a National Conference (NC) spokesperson said party president Farooq Abdullah has spoken to all mainstream parties in Jammu and Kashmir, except the BJP, and invited them to join the meeting here on August 22 to discuss the issue.

"I have requested Farooq Sahib, being the seniormost leader, to convene an all-party meeting to discuss the new developments for adopting a unified course of action to deal with it," Mufti told reporters earlier.

The PDP president said she has asked the National Conference leader to invite even such parties with which "we have differences".

Mufti said the move of the election authorities to allow outsiders residing ordinarily -- for jobs, education or business -- in Jammu and Kashmir as voters in the Union Territory was "aimed at finishing off the democracy" here.

"This is the last nail in the coffin of democracy here. Earlier, they did half the rigging through the delimitation commission. The head (of the commission) has been duly rewarded. Democracy is being finished," she said.

Mufti said the BJP has "converted Jammu and Kashmir into a laboratory" for its experiments which are then replicated across the country.

The Peoples Democratic Party (PDP) president said in some states, there are allegations of EVM manipulation while in others, the BJP is "using money power to topple elected governments to install its own".

"Their only alliance partner across the country in this is the ED. They want to have BJP government everywhere as their ultimate goal is to replace the national tricolour with a saffron flag," she added.

Mufti said she wanted to tell the nationalist people of India, who feel happy over disempowerment of the people of Jammu and Kashmir, that everything that was being done is "unconstitutional".

"I want to tell the nationalist parties of India, those who fought for the freedom of the country and not those who wrote apology letters to the British, that whatever is being done in Jammu and Kashmir is being done unconstitutionally. The BJP is telling you that they are doing all this for the Constitution and the country but they are doing it only for the BJP," she added.

Mufti said the BJP was resorting to demographic changes to tilt the electoral balance in its favour in Jammu and Kashmir as it has been "unable to defeat the resolve of the people".

"They have been ruling Jammu and Kashmir directly for three (four) years now but have been unable to defeat the resolve of the people to resist. Now they have resorted to allowing outsiders to register as voters in a bid to disenfranchise the people. But this demographic change will not only affect Muslims but Dogras and Kashmiri Pandits as well," she said.

Mufti, a former Jammu and Kashmir chief minister, said the leadership will have to focus on the resolution of the Kashmir issue as it was "no more just about elections".

"We will have to focus on resolution of Kashmir issue as the BJP is using all the backdoor and short cuts. It is not about elections any more, it has gone beyond the elections.

"These moves will only radicalise the Kashmiri youth... more and more youth are picking up guns. Kashmiri Pandits who were living here for the past 32 years are now being targeted," she said.

Mufti accused the BJP of adopting the "policy of Nazi Germany and Israel here so that they can install a fascist" at the helm of affairs.

"But they should remember that Hitler was not able to eliminate Jews and Israel will not be able to finish of Palestinians. Same way they cannot do it here as well till the last Dogra and last Kashmiri is standing," she said.