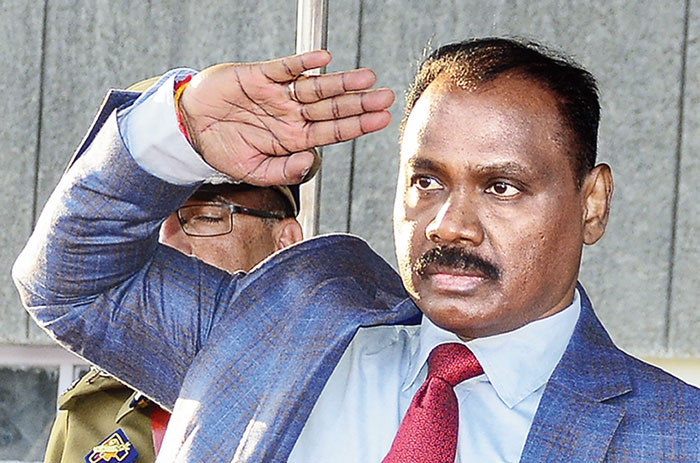 Jammu and Kashmir appeared to be united in grief on Thursday as it began its journey as a Union Territory.

The new Union Territory’s first lieutenant-governor, G.C. Murmu, took oath of office at Raj Bhavan in Srinagar amid unprecedented security and several incidents of violence across the Valley. The Chief Justice of Jammu and Kashmir High Court, Gita Mittal, administered him the oath of office.

Murmu, a 1985-batch Gujarat-cadre IAS officer, took oath in Hindi. After taking oath, the lieutenant-governor inspected the guard of honour and took a salute.

“The oath ceremony was a sombre occasion. Most of the men present there were officers. Only one known politician (Peoples Democratic Party Rajya Sabha member Nazir Ahmad Laway) other than those of the BJP was present,” an officer who participated in the event said. Most of the media was not invited.

The streets of Kashmir wore a deserted look and there were no celebrations in Jammu either. There were clashes at several places in the Valley. The attendance of employees at government offices was thin.

The only district of the erstwhile state where people were in a celebratory mood was Leh in Ladakh, which has also become a Union Territory. People in Muslim-majority Kargil, the other Ladakh district, are unhappy. Radha Krishna Mathur took oath as the first lieutenant-governor of the Union Territory of Ladakh.

The Valley has been shut for the past three months against the August 5 decision to scrap Jammu and Kashmir’s special status and its bifurcation into Union Territories.

A National Conference spokesman said the forcible division of the state “will neither change the unity, individuality and collective character of Jammu and Kashmir, nor will it… solve the Kashmir problem”.

Iltija Mufti, the daughter of jailed former chief minister Mehbooba Mufti, said Kashmiris “mourn (the) massacre of J&K”, referring to the bifurcation of the state.

“The same development is a source of sadistic pleasure to rest of India. The emotional gulf that exists between you and us couldn’t be any wider. You violated our consent and rights, but will never control how we feel. Long live Kashmir…,” Iltija, who operates her mother’s Twitter handle, tweeted.

BJP leader and former deputy chief minister Nirmal Singh claimed that the decision to turn the state into a Union Territory was a “temporary measure”, apparently trying to assuage people in his home Jammu province who are angry with the move.

“We (people of Jammu) feel very happy, feel fully integrated,” he said, referring to the scrapping of the state’s special status.

Jammu and Kashmir High Court lawyer Shakeel Ahmad, however, said people in Jammu were not happy, except those aligned to the BJP. “There were no crackers here, no distribution of sweets. Life was routine,” he said.

Ahmad said scores of lawyers from Jammu’s Young Lawyers Association staged a protest on Thursday against the extension of central acts now that the state had become a Union territory. He said the move had snatched from the judiciary the power to register land documents and reallocated it to revenue authorities.

“It will render hundreds of lawyers jobless in Jammu and is an offshoot of the decision to scrap Article 370. The protest by lawyers is an indirect protest against the move. The Jammu Bar has convened a general house meeting tomorrow to discuss the issue,” Ahmad said.

“Similarly, jobs in Jammu will be (open) to the entire country and Jammuites will loose jobs. So what is there to celebrate?” he asked.

Jammu Chamber of Commerce and Industry president Rakesh Gupta said it was too early to comment whether people in Jammu were happy or angry.

“We have yet to see what laws are being adopted…. (We will wait) till we see the laws are for the betterment of the people at large,” he said.

Jammu Congress leader Ravinder Sharma said nobody was happy with the decision to downgrade the state to a Union Territory, not even those who had rejoiced when the special status was scrapped.

“There is a sense of loss…. We have lost the right to land and jobs,” he said.