Bad weather is believed to have contributed to the accident; officials said the Cheetah chopper belonged to the Army Aviation Corps 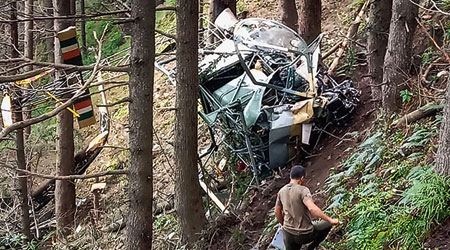 Wreckage of an Indian Army helicopter after it crash-landed during a training sortie in a dense forest near Patnitop in Jammu and Kashmir’s Udhampur district on Tuesday. Two pilots were killed in the incident .
PTI
Muzaffar Raina   |   Srinagar   |   Published 22.09.21, 01:23 AM

Two major-rank pilots were killed after an army helicopter crash-landed in a dense forest at the Patnitop area of Jammu and Kashmir’s Udhampur district on Tuesday.

“During an operational area clearance sortie at Patnitop, Major Rohit Kumar and Major Anuj Rajput met with an accident while manoeuvring the helicopter they were flying. During the crash-landing of the helicopter, both pilots suffered grave injuries,” defence spokesman Lt Colonel Devinder Anand said.

“They were immediately evacuated to Command Hospital, Udhampur. However, the officers succumbed to their injuries,” he added.

Bad weather is believed to have contributed to the crash. Officials said the Cheetah helicopter belonged to the Army Aviation Corps.

On August 3, the army’s advanced light helicopter Dhruv had crashed into the Ranjit Sagar dam lake in Jammu and Kashmir’s Kathua district, leaving the two pilots missing for days.