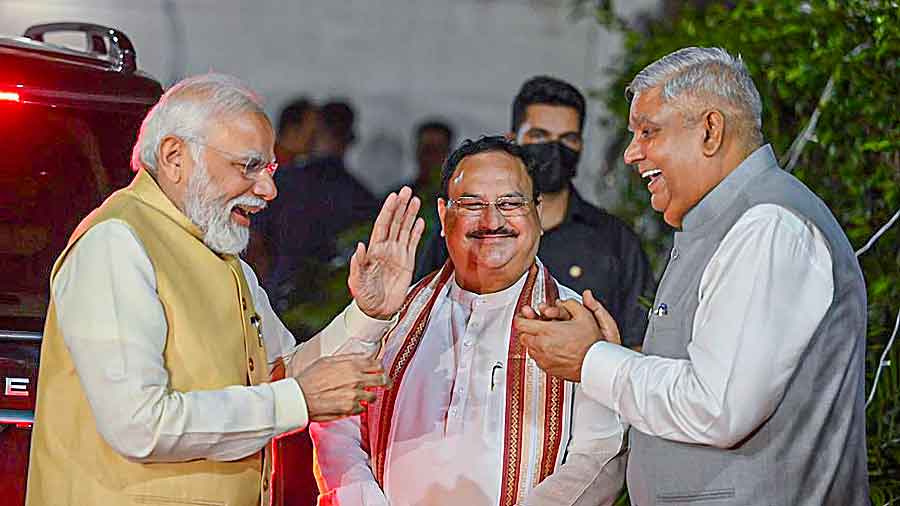 DA candidate Jagdeep Dhankhar was elected as the 14th Vice President of India on Saturday as he defeated joint Opposition candidate Margaret Alva.

Dhankhar, a former governor of West Bengal, secured 528 votes while 80-year-old Alva got 182.

The numbers were stacked in favour of Dhankhar as the ruling BJP enjoys an absolute majority in Lok Sabha and has 91 members in Rajya Sabha. The BJP heads the National Democratic Alliance (NDA).

Even before the results were announced, celebrations had started outside the residence of Parliamentary Affairs Minister Pralhad Joshi where Dhankhar was present.

Joyous scenes were also reported from Rajasthan's Jhunjhunu, the hometown of Dhankhar.

Soon after the announcement of the result, Prime Minister Narendra Modi met Dhankhar and congratulated him.

As many as 725 MPs cast their ballots in the poll, which is 92.94 per cent of total votes, an official said, adding 15 votes were declared invalid.

Members of Parliament, including nominated ones, are entitled to vote in the vice presidential poll.

While the electoral college comprises 788 members, due to eight vacancies in Rajya Sabha, the actual strength is 780. The Trinamool Congress had abstained from voting claiming it was not consulted while naming Alva as the opposition pick. However, two of its MPs -- Sisir Kumar Adhikari and Dibyendu Adhikari -- broke ranks and cast their ballots. The party has 36 MPs, including 23 in Lok Sabha.

The voter turnout this time was lower than 98.2 per cent recorded in the 2017 election when M Venkaiah Naidu was elected as the vice president.

The rise of Dhankhar, 71, to become the next vice president has surprised many.

Dhankhar, who had been associated with the Janata Dal and the Congress, joined the BJP only in 2008 after a hiatus of nearly a decade when he concentrated on his legal career.

He has championed issues related to Other Backward Classes, including the grant of OBC status to the Jat community in Rajasthan.

The BJP described Dhankhar as "kisan putra" while announcing his candidature for the vice presidential election, a move seen in the political circles aimed at reaching out to the politically significant Jat community which had participated in huge numbers in the year-long farmers' protests on the borders of the national capital against agriculture reform measures unveiled in June 2020.

From pasting party posters to evolving as an epitome of political and ideological loyalty who became one of the BJP's most visible leaders and later India's vice president, Naidu came a long way.

He entered into student politics through the ABVP and played an active role in the movement led by Jayaprakash Narayan.

Born in a humble agricultural family in Andhra Pradesh's Nellore district, Naidu has served as a BJP president, a union minister and a long-time Rajya Sabha member.

Known for his oratory skills, Naidu often uses interesting one-liners and rhyming phrases to put across his views effectively.

Not many know that Naidu translated former prime minister Atal Bihari Vajpayee's speeches for his audience down south.

As Rajya Sabha chairman, Naidu had to deal with difficult situations on various occasions, including protests in the House by opposition members on issues such as the now-repealed three central farm laws.

For Alva, the vice presidential election has been another comeback. Barring a brief lull in 2008 triggered by her standoff with Congress president Sonia Gandhi over the issue of family entitlement in ticket distribution, the suave and soft-spoken Alva's career has largely been a dream run.

She has had a political career spanning over four decades during which she occupied several positions, including a five-time Congress MP, a union minister and governor.

She congratulated Dhankhar on his victory.

In the past there had been four instances when candidates were elected unopposed to the post of the vice president who is also the chairperson of Rajya Sabha.

In the 1992 vice presidential poll, K R Narayanan bagged 700 of the 701 valid votes while his rival Kaja Joginder Singh alias "Dharti Pakad" managed just one vote in his favour.

The meetings came soon after Dhankhar was declared winner in the vice presidential election with 528 votes in his favour against 182 bagged by joint opposition candidate Margaret Alva.