He will serve for three years at the helm 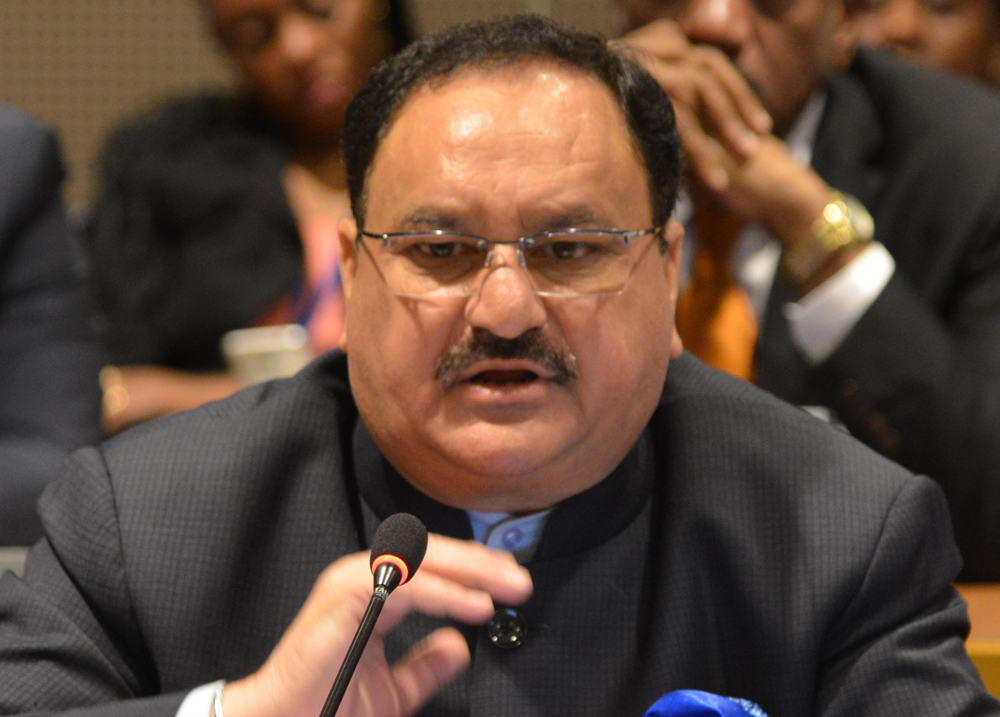 Prime Minister Narendra Modi is scheduled to felicitate newly-appointed BJP chief J.P. Nadda at the party office and both leaders will later hold a meeting with chief ministers and deputy chief ministers of the states ruled by the party.
(Wikimedia Commons)
The Telegraph And PTI   |   New Delhi   |   Published 20.01.20, 09:37 AM

BJP leader J. P. Nadda was on Monday elected unopposed as the party national president after he emerged as the only leader in the fray following the nomination process in which his candidature was endorsed by top party leaders.

Senior BJP leader Radha Mohan Singh, who is the in-charge of the organisational election process, made the announcement at the party headquarters in New Delhi.

Outgoing president Amit Shah and other senior leaders congratulated the Himachal Pradesh leader, who had been serving as the party's working president. He will serve for three years at the helm.

Nadda, who was appointed as BJP's working president last June, took over from Shah, who was at a helm for an eventful five-and-a-half years during which the party won its biggest majority in 2019 Lok Sabha election and expanded its footprint across the country.

Nadda's name was proposed by the top party leaders, including Union ministers Shah, Rajnath Singh and Nitin Gadkari, besides several chief ministers during the nomination process.

Prime Minister Narendra Modi is scheduled to felicitate Nadda at the party office and both leaders will later hold a meeting with chief ministers and deputy chief ministers of the states ruled by the Bharatiya Janata Party.

Union minister Ravi Shankar Prasad spoke of Nadda's rise through the ranks and said he had always been an 'inspiring' worker.

Prasad noted that the leader from Himachal Pradesh worked his way up as an 'excellent' organisational leader, be it in the RSS students' wing ABVP or the BJP youth wing, and was also a successful health minister in the first Modi government.

'He brings with him an enormous experience, be it as a party leader or administrator,' Prasad told PTI, expressing confidence that Nadda would consolidate the great successes the party achieved under Shah.

Shah said that under his successor's leadership the party will become stronger and expand further.

'Heartiest congratulations to J P Nadda Ji on being elected the national president of the Bharatiya Janata Party. I firmly believe that under Prime Minister Narendra Modi ji's guidance and your leadership, the BJP will become stronger and expand even further,' Shah said in a tweet.

'The party will benefit from Nadda ji's organizational skills and experience and will set new records,' he said in a series of tweets.

'I am grateful for the affection and support that I got from the organization as the BJP national president. I thank Prime Minister Modi, all senior leaders and colleagues for always keeping faith in me,' Shah added.

'I consider myself fortunate to have had the privilege of working as president for five years in this great organization, nurtured by many great personalities and great men,' Shah said.

He also expressed gratitude to activists and well-wishers for standing with him 'like a rock'.

Gujarat chief minister Vijay Rupani said the party organisation had been in a strong and robust condition under Shah, and Nadda would build on it to ensure more success for the BJP in future.

Former Chhattisgarh chief minister and BJP vice president Raman Singh expressed confidence that the 'golden era' the BJP had under Shah would continue.

Congratulations & Best wishes to Shri @JPNadda ji on being elected as the BJP National President. I’m sure the party will scale new heights under his able leadership. #JPNadda pic.twitter.com/9ho4ZAZe14

Congratulations to Sri @JPNadda on taking over as the new @BJP4India President.

Wishing Sri #JPNadda the very best in His new responsibility. I am sure under His leadership, BJP will touch new heights.

Haryana chief minister posted a picture of him with Nadda and said that his experience in politics will inspire the workers strengthen the party.

He is seen as seasoned organisation man, who was associated with the Akhil Bharatiya Vidyarthi Parishad (ABVP) from his college days before joining the youth wing of the BJP and rising through its ranks.

Nadda has also served as a minister in BJP governments in Himachal Pradesh as well as at the Centre.