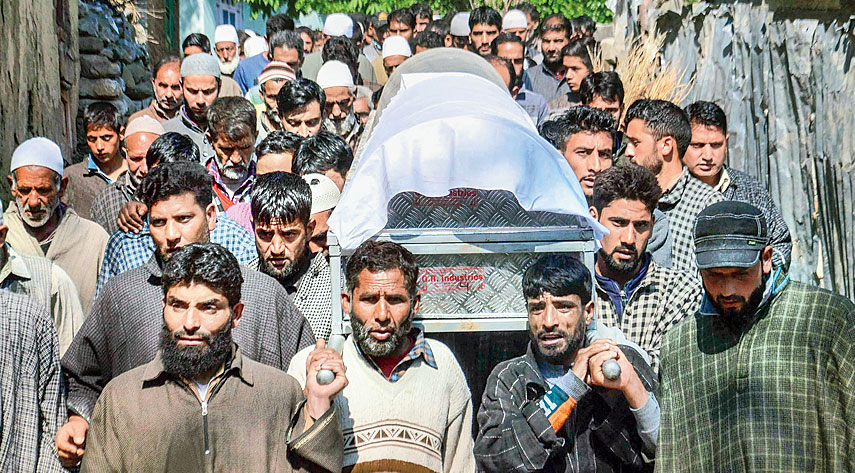 The death of a BJP leader in a militant attack on Saturday night has pushed the Jammu and Kashmir administration led by governor Satya Pal Malik on the back foot and raised more questions about Prime Minister Narendra Modi’s new hardline stand on the Valley.

His family and the Valley BJP leadership on Sunday blamed the police decision to withdraw his security last month, literally indicting the Centre, which is believed to be behind a host of hardline measures that were taken in the Valley in the wake of the February Pulwama attack that left 40 CRPF troopers dead.

The authorities had in March withdrawn or downgraded the security of separatist leaders and hundreds of pro-India politicians, triggering claims that the governor-led administration had deliberately left them vulnerable to militant attacks.

Under fresh fire for the decision, a Raj Bhavan spokesperson said the governor has pledged to protect “all political people” from now on “at every cost”, indicating that a decision to restore their security was on the cards.

The spokesperson said the governor has directed officials to identify “any lapses on the part of security agencies regarding ensuring security of political people”.

“(The) Governor has conveyed that immediately after the opening of (the) Governor’s Secretariat in Srinagar (in the next few days), he will call a high level meeting to review the safety and security aspects of all political Leaders and Sarpanches in the state,” the spokesperson said in a statement.

The decision came even as Modi strongly condemned Mir’s killing and said his contribution to strengthening the BJP in the Valley would always be remembered.

Mir’s son Zahoor Ahmad said the police decision to withdraw his father’s two personal security officers was to blame for his death. He also claimed that Anantnag police chief Altaf Khan had not heeded the family’s repeated pleas to restore Mir’s security.

BJP spokesperson Altaf Thakur echoed the family. “In September last year he (Mir) had to flee from his home after militants raided his house. We accommodated him at our Srinagar office for two months. That happened even as he had two security men guarding him then. Now imagine the threat he faced after his security was withdrawn,” he said.

The BJP leader said around 40 BJP men were among hundreds whose security was withdrawn in recent weeks.

Former chief minister Omar Abdullah took a swipe at the BJP for praising the governor’s decision then for withdrawing his security.

“Not long ago senior BJP leaders were bragging about how undeserving people had had their security withdrawn in J&K. I’d warned against the decision then & yesterday’s assassination of Gul Mohd Mir only confirms what I’d feared — it was a foolish decision disconnected from reality,” Omar tweeted.

The letter claimed the decision was taken at a meeting chaired by chief secretary B.V.R. Subrahmanyam, saying he had “no mandate or locus standi” to decide on an issue that fell in the domain of intelligence and security agencies in the state.

“The decision smacks of political conspiracy to sabotage election process and jeopardize the personal safety of political leaders,” the letter said.

Omar said the withdrawal of security had been opposed by state and central intelligence agencies and asked who it was “who overruled them & went ahead regardless?”

Mir, who was in his sixties and had a long flowing beard for which he was called Moulana, had ruffled many feathers in the Valley recently after videos surfaced where he was seen raising pro-Islam slogans and seeking votes for the BJP in the same breath.

He had unsuccessfully contested the 2008 and 2014 Assembly polls in Anantnag on a BJP ticket.

The BJP had organised several small rallies in Anantnag constituency in recent days, surprising many in the Valley, as even established players like the National Conference and the Peoples Democratic Party have been struggling to hold rallies in South Kashmir.

Polling is being held in the Anantnag parliamentary seat in three phases for security reasons. The Shopian and Pulwama districts of the constituency vote on May 6.