The governor had rebuffed their calls, but their unexpected decision to join hands apparently rattled the BJP 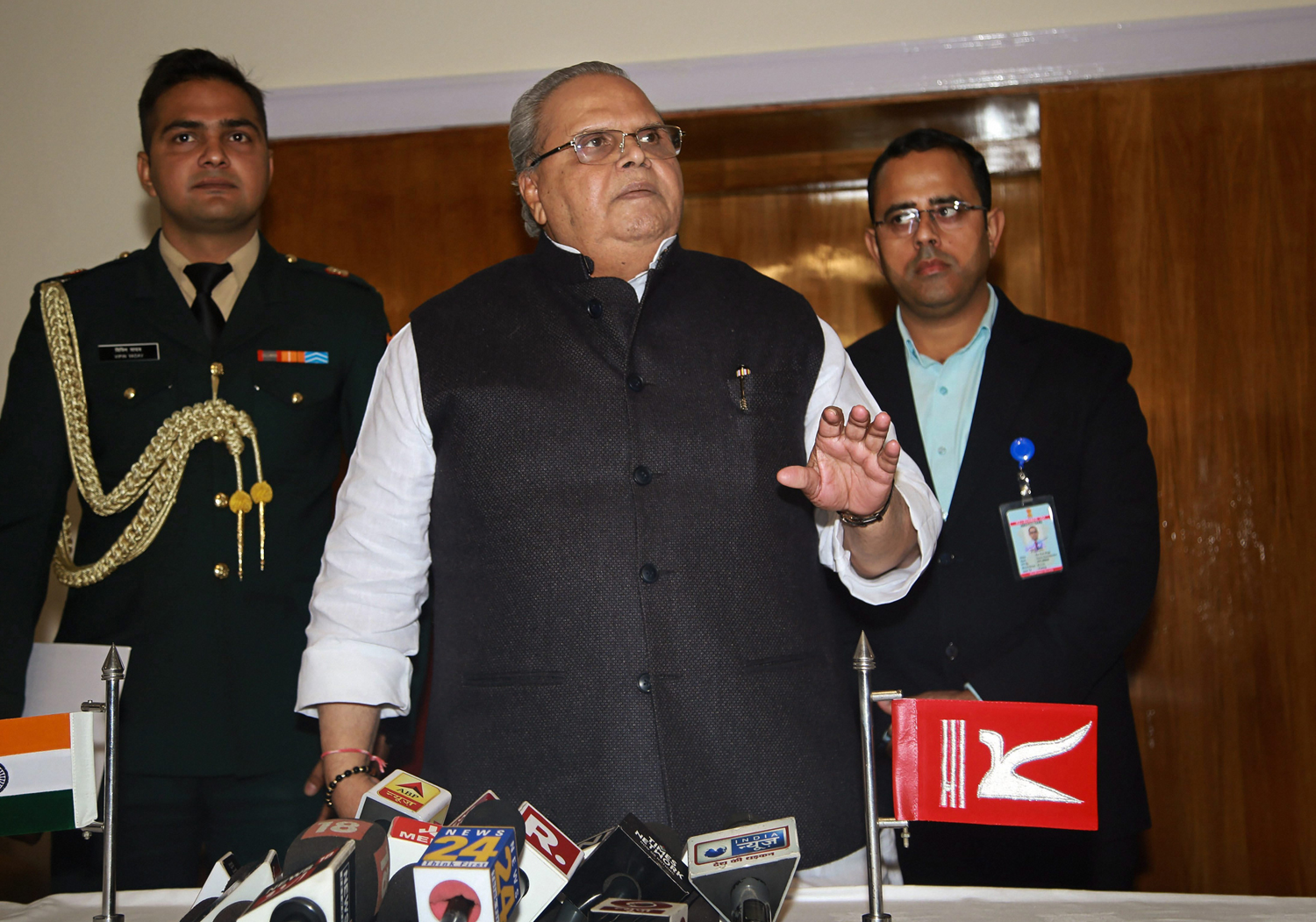 Malik claimed the grand alliance was “opportunistic”, was beset by conflicting ideologies, and would have been unstable.

Omar countered that the three parties had certain things in common while the previous PDP-BJP government had none. He asked why the BJP had no problem with such an alliance.

Omar asked Malik to identify the people behind the alleged horse-trading, claiming that such an allegation cannot be levelled against parties that have joined hands for government formation with a collective majority.

Mehbooba said the three parties, regardless of political affiliations, shared the view that the Assembly should be dissolved immediately to avert horse-trading and defections.

“Oddly enough, our pleas fell on deaf ears. But who would have thought that the very idea of a grand coalition would give such jitters (to the Centre)?” she said.

Malik received flak from Opposition parties for passing a value judgement on the quality of the proposed alliance when technically he should have gone just by the numbers.

“The governor has no business to decide that parties with ‘opposing ideologies’ cannot form a suitable government,” the CPM politburo said.

“By this yardstick, the PDP-BJP government should not have been allowed to be formed…. All that the governor can do is to ask the leader who is staking claim with majority support to prove that majority on the floor of the house.”

Congress chief spokesperson Randeep Surjewala said: “Is the governor… speaking as a representative of BJP, spokesperson (for the) BJP or as a protector and defender of the Constitution of India…?’’

Governor Satya Pal Malik’s decision to dissolve the Assembly may have prevented the National Conference, People’s Democratic Party and the Congress from forming the government but these parties see the development as a victory for them.

They had all along demanded dissolution of the House after the BJP withdrew support to a PDP-led government in June, each for its own reasons.

For five months, the governor had rebuffed their calls but the trio’s unexpected decision to join hands apparently rattled the BJP.

The National Conference and the Congress want Assembly elections at the earliest, keen to cash in on the PDP’s unpopular move of allying with the BJP to form the previous government.

A National Conference source said: “The decision to join hands with the PDP could have spelt political suicide for us as we were offering them a lifeline. We are absolutely delighted at the turn of events.”

For the PDP, the House dissolution is an opportunity to prevent further erosion and stay united. The party believes the BJP and its ally Sajjad Lone were trying to split it and form a government with the support of rebels.

On Tuesday, the PDP suffered a setback when party veteran and Baramulla MP Muzaffar Baig threw his weight behind a third front led by Lone.

With the governor dissolving the House, Lone’s dream of becoming chief minister stands grounded for now. The former separatist is a minnow and the BJP, still strong in Jammu, is unlikely to find a partner in the next election.

The grand alliance appeared short-lived, anyway, with Omar on Thursday rejecting any pre-poll pacts and offering only moral support to the PDP if it challenged the House dissolution in the courts.

The PDP has shown no interest so far in challenging the governor’s decision.

Omar said his party had never suggested it would contest future elections together with the PDP.

“This arrangement was to protect the state from the current mess. I don’t think the NC, Congress and PDP fighting elections together will benefit anyone in Jammu and Kashmir because I believe legitimate Opposition voices are important (in a democracy),” he said.

All three parties, however, on Thursday fiercely criticised the governor and the BJP. Malik defended his decision, claiming he had received reports of efforts to buy off MLAs.