‘Sin to stay silent when fundamental rights, Constitution being trampled upon’ 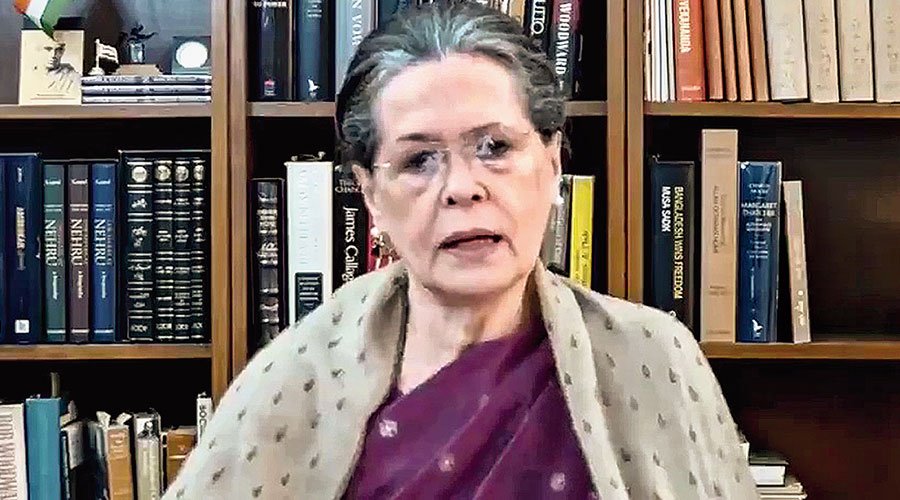 As India enters the 75th year of independence, the Congress Monday said party chief Sonia Gandhi has urged people to introspect what freedom means and told them it is a "sin" to remain silent when fundamental rights and the Constitution are "trampled upon".

"When fundamental rights of people, guaranteed by the founding fathers of our Constitution are being trampled upon, it is a sin to stay silent," Congress chief spokesperson Randeep Surjewala said, quoting Gandhi's article in an English daily.

He said that in the article, the party president has talked about what freedom means for people, with the country entering the 75th year of Independence.

When the government "attacks" Parliament and "tramples upon" its traditions, "enslaves" democracy, attempts to "violate" the Constitution and "shackles" institutional autonomy, the people of the country need to introspect what freedom means to them, she has said.

In her article she argues that Indian democracy is in need of repair. "We must undo the damage."

She said the progress achieved in the last few decades has been reversed under the present government which indulges in "hollow slogans, event management and brand-building" at the cost of governance.

"After decades of progress towards an India of our dreams, why is our democracy in danger? It is because tangible achievements have been substituted by hollow slogans, event management and brand-building only to benefit those in power at the expense of governance.

"It is because symbolism has triumphed over meaningful action. It is because democracy is sought to be replaced by an autocracy. Today's symbolism and reality is that Parliament House is being turned into a museum," Gandhi said in the article shared by the Congress.

As we begin independent India's 75th year, we owe it to our freedom fighters to undo this damage to our Republic, the Congress president said.

She also called on the need to draw courage from them to take on those who would replace their inclusive, liberating idealism with a narrow, sectarian, worldview overflowing with prejudice and discrimination.

"We must not be swayed by hollow attempts to appropriate our icons by those who made no contribution to our struggle for independence. They may borrow Gandhiji's eyeglasses but their vision for our country remains Godse's. Our founders rejected that divisive ideology 74 years ago, and we must reject it once again," Gandhi said.

She said in a world affected by the COVID-19 and climate change, India's response to these challenges will be crucial to the world.

"The recently concluded Monsoon session of Parliament displayed the disdain of the present [Modi] government towards parliamentary processes and building consensus," Gandhi said.

She claimed that the opposition was repeatedly denied an opportunity to raise issues of national importance.

"Increasingly over the past 7 years, laws have been passed without debate in the House or scrutiny by a Committee, effectively turning Parliament into a rubber stamp," she alleged.

She also criticised the government's handling of the coronavirus crisis. "Decades of progress in improving health care have been reversed by the mismanagement of the COVID-19 pandemic."

Referring to the farmers' agitation, she alleged the government has refused to heed to their legitimate concerns.

"We must ensure that those who feed us do not themselves starve. We have to make agriculture more sustainable, economically and ecologically," she said.

She also alleged the misuse of laws and government agencies. "Doctored videos, planted evidence, and fake toolkits are all becoming weapons of intimidation and disinformation to suppress dissent," she alleged.