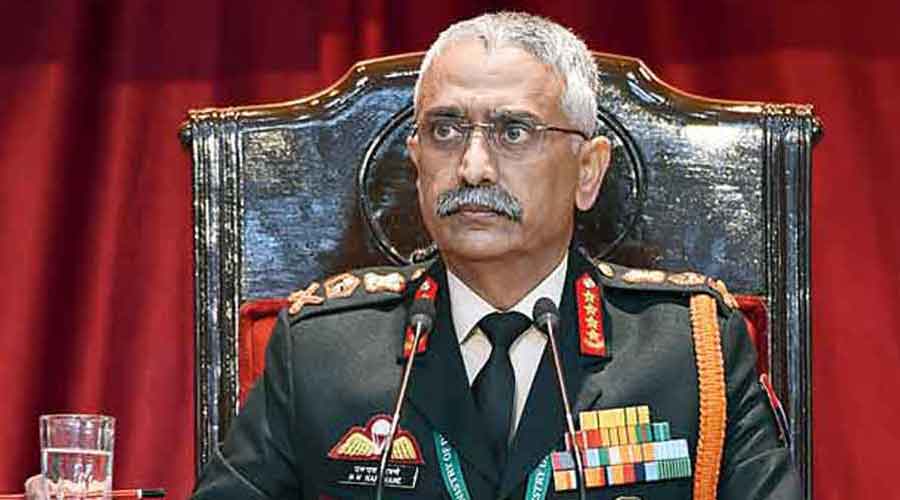 The top brass of the Indian Army led by General M.M. Naravane on Thursday reviewed the situation along the frontiers with China and Pakistan in the wake of the recent changes in leadership at the northern and eastern commands, sources in the defence ministry said.

“The top army brass today discussed at length the security situation along the Line of Actual Control (LAC) with China and the Line of Control (LoC) with Pakistan. The meeting is significant considering India is facing the threat of two-front aggression from China and Pakistan,” a defence ministry official told The Telegraph.

The northern command looks after Jammu and Kashmir, the LoC and the Actual Ground Position Level with Pakistan and the LAC with China in Ladakh.

India and China have been locked in border disputes at multiple friction points in eastern Ladakh since May 2020. The Chinese army is said to have altered the unmarked LAC at these friction points and is estimated to have taken over close to 1,000sqkm of India-claimed territory.

During the last round of talks between the two sides this January, the Chinese People’s Liberation Army had refused to disengage from the friction points — Hot Springs and the strategically crucial Depsang Plains where the PLA is said to be entrenched 18km inside India-claimed lines.

The Chinese have retreated partially in the Galwan Valley, Gogra and the Pangong Lake after the creation of buffer zones while remaining well within India-claimed lines.

Over the past few months sources in the security establishment have been flagging the two-front threat and how the armies of China and Pakistan have been carrying out regular joint patrols in Pakistan-occupied Kashmir during the ongoing military standoff between India and China in eastern Ladakh.

Intelligence reports have suggested that Beijing is helping Islamabad in setting up multiple surface-to-air missile launch sites and a missile defence system in the PoK.

“The intelligence reports suggest that China is helping Pakistan to set up sites for surface-to-air missiles in PoK and both armies are also holding joint patrols. We are witnessing closer cooperation at the military and economic levels between the two countries amid the border standoff between India and China,” said a security official.

India has a border of about 7,000km with the two countries.

Last October, Indian Air Force Chief Marshal V.R. Chaudhari had said India was fully prepared to deal with any two-front war scenario while referring to the danger posed by China and Pakistan along its borders.