PM Boris says his welcome in India made him 'feel like Sachin Tendulkar, Amitabh Bachchan' 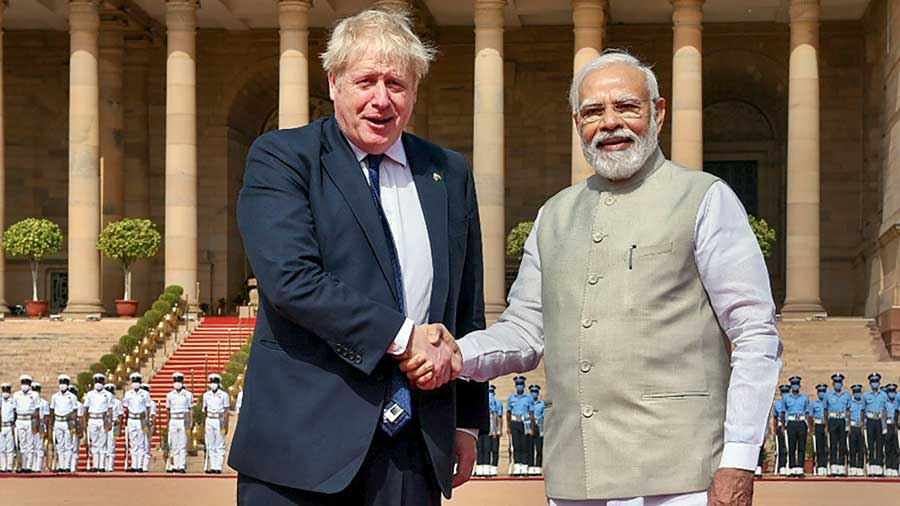 Prime Minister Narendra Modi and his British counterpart Boris Johnson on Friday pushed for closing the negotiations for a free trade agreement by the end of the year, and agreed on a new and expanded bilateral defence and security partnership.

In their wide-ranging talks, Modi and Johnson vowed to give fresh momentum to overall ties and reviewed the progress made in the implementation of the Roadmap 2030 that listed ambitious targets for deeper collaborations in diverse sectors.

In his media statement, Modi said good progress has been made in negotiations for the India-UK free trade agreement.

"We have decided to do our best to conclude the free trade agreement by the end of this year," Modi said in presence of Johnson.

He said both sides emphasised on a free, open, inclusive and rules-based order in the Indo-Pacific while reiterating the need for respecting the territorial integrity and sovereignty of all countries.

"UK will work with India to boost security in the Indo-Pacific, including new fighter jet technology, helicopters and collaboration in the undersea battlespace. PM will also discuss new cooperation on clean and renewable energy," PM Johnson said.

We reiterated our support for peaceful, stable and secure Afghanistan, he said, adding it is necessary that Afghan territory is not used to spread terrorism in other countries.

On the Ukraine crisis, Modi emphasised dialogue and diplomacy to address the problem and called for an immediate ceasefire.

In his remarks, Johnson described the ties between India and Britain as "one of defining friendships of our times".

Today, we have agreed on a new and expanded defence and security partnership, he said.

We are telling our negotiators to get it done by Diwali in October, he said on the FTA.

"We aim to have a new Free Trade Agreement by Diwali...I have urged officials to get it done by Diwali. We appreciate the tariffs being dropped by India on certain goods and commodities and in return, we too are dropping some tariffs we levy. We also look forward to the close cooperation shared between the UK's NHS and India's health services," the British PM said.

The India-UK relationship was elevated to a Comprehensive Strategic Partnership during the India-UK virtual summit held between Modi and Johnson in May last year.

At the summit, the two sides adopted a 10-year-roadmap to expand ties in key areas of trade and economy, defence and security, climate change and people-to-people connections among others.

PM Modi invited the UK to join India's "National Hydrogen Mission" to deepen two country's climate and energy partnerships. "The UK and India are launching a virtual Hydrogen Science and Innovation hub to accelerate affordable green hydrogen, as well as new funding for the Green Grids Initiative announced at COP26, and collaboration on joint work on the electrification of public transport across India," a UK release had earlier said.

UK Prime Minister Boris Johnson on Friday met PM Narendra Modi at Hyderabad House in the national capital and expressed his happiness over the rousing welcome he got when he landed in Ahmedabad. The British prime minister arrived in India on Thursday on a two-day visit in the backdrop of the Russia-Ukraine war.

“I thank PM Narendra Modi and the people of India for the grand welcome. I felt like Sachin Tendulkar upon my arrival and also like Amitabh Bachchan when I saw hoardings everywhere,” he said.

UK PM spent his first day in India in Gujarat with dancers and giant billboards lining his paths from the airport and back.