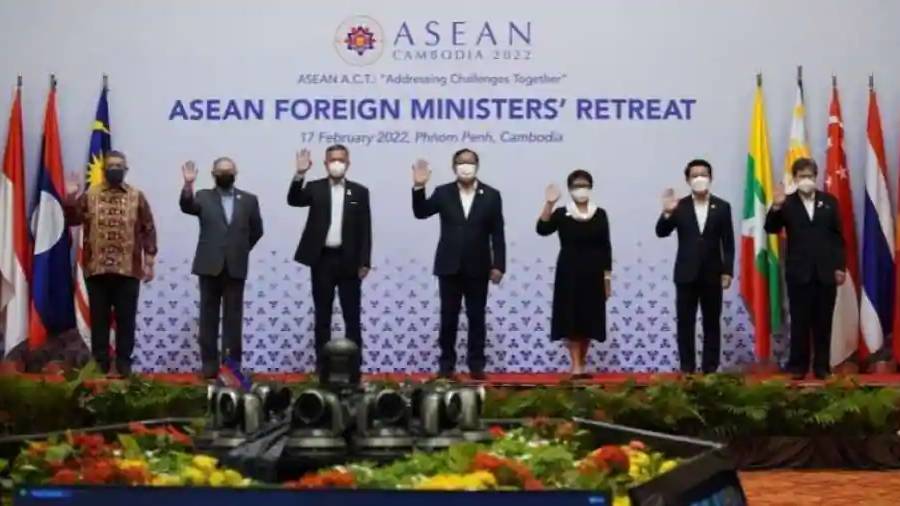 India will host the foreign ministers of ASEAN nations from June 16 to 17 to mark the 30th anniversary of its relations with the 10-nation grouping.

External Affairs Ministry spokesperson Arindam Bagchi said Myanmar's participation at the ASEAN-India foreign ministers' meeting would be based on the rules of the grouping, which is seen as an indication that the country's foreign minister is unlikely to be in New Delhi.

The position of the ASEAN on engaging Myanmar at multilateral forums following the military coup in that country last year has been that it should be at the non-political level.

The foreign minister of Singapore is India's country coordinator in ASEAN (Association of Southeast Asian Nations).

Bagchi said foreign ministers of other ASEAN member states and the ASEAN secretary-general will participate in the SAIFMM.

The year 2022 has been designated as the ASEAN-India friendship year.

Asked about Myanmar's participation, Bagchi said it would be as per the ASEAN rules.

There were indications that India is unlikely to invite the Myanmarese foreign minister for the meeting and instead would invite an official.

On February 1 last year, Myanmar's military grabbed power in the coup and imposed a state of emergency after detaining Nobel laureate Suu Kyi and other leaders of her National League for Democracy (NLD).

The country witnessed massive protests following the coup. The international community has been severely critical of the coup.

"Today, ASEAN-India strategic partnership stands on a strong foundation. The ASEAN is central to India's Act East Policy and its vision for the wider Indo-Pacific," Bagchi said.

"This multi-faceted partnership encompasses many sectoral dialogue mechanisms and working groups that meet regularly at various levels and include annual summit, ministerial and senior officials' meetings," he said.

The ongoing India-ASEAN collaboration is guided by the Plan of Action 2021-2025 which was adopted in 2020.

While ASEAN-India Foreign Ministers' Meeting (FMM), hosted by the ASEAN Chair is an annual event, the SAIFMM would be the first ASEAN-India FMM to be hosted by India in New Delhi.

The SAIFMM will be preceded by 24th ASEAN-India Senior Officials Meeting on June 15.

The SAIFMM will be accompanied by the 12th edition of Delhi Dialogue, a premier Track 1.5 Dialogue in the ASEAN-India calendar, which will be hosted by India on June 16-17.