The two sides inked five agreements providing for cooperation in areas of culture, IT, cyber security, youth matters and broadcasting 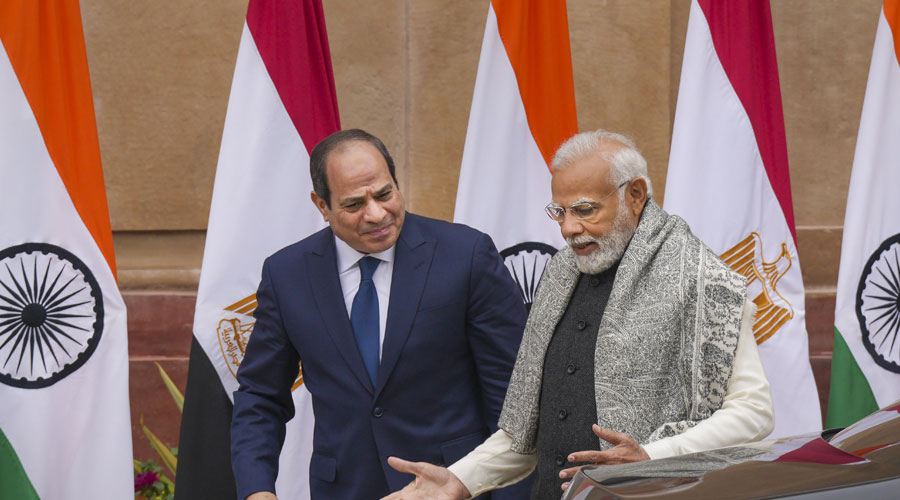 India and Egypt on Wednesday decided to elevate their ties to the level of strategic partnership with Prime Minister Narendra Modi and visiting Egyptian President Abdel Fattah El-Sisi vowing to expand ties in areas of defence and security, trade and counter-terror cooperation.

After his wide-ranging talks with Sisi, Modi said the two sides were unanimous in their view that terrorism is the most serious security threat to humanity and that they agreed that concrete measures are needed to end cross-border terrorism.

The two sides inked five agreements providing for cooperation in areas of culture, IT, cyber security, youth matters and broadcasting.

In his media statement in the presence of Sisi, Modi also said that both sides have decided to take the bilateral trade to USD 12 billion in next five years.

"We have decided that under the India-Egypt strategic partnership, we will develop a long-term framework for comprehensive cooperation in political, security, economic and scientific fields," Modi said.

He also noted that it was decided to further strengthen cooperation between the defence industries of the two countries, and to increase exchange of counter-terror-related information and intelligence.

In his remarks, Sisi said there was a discussion on boosting connectivity between the two countries. Egypt wants to see more and more Indian tourists visiting that country, he said.

The Egyptian President echoed Modi's views on terrorism and said united efforts are required to deal with the menace.

"We have similar views on dealing with terrorism and extremism," he said.

The 68-year-old influential Arab leader, who arrived here on Tuesday on a three-day visit, will grace the Republic Day celebrations as the chief guest.

The Egyptian President previously visited India in October 2015 to participate in the third India-Africa Forum Summit which was followed by his State visit in September 2016.

This is for the first time that the President of  Egypt has been invited as the chief guest to India's Republic Day celebrations. A military contingent from the Egyptian Army will also participate in the Republic Day parade.

India is keen to further expand ties with Egypt, a key player in the politics of both the Arab world as well as Africa. It is also seen as a major gateway to markets in Africa and Europe. PTI MPB TIR TIR