Naravane visits forward areas along the Line of Actual Control 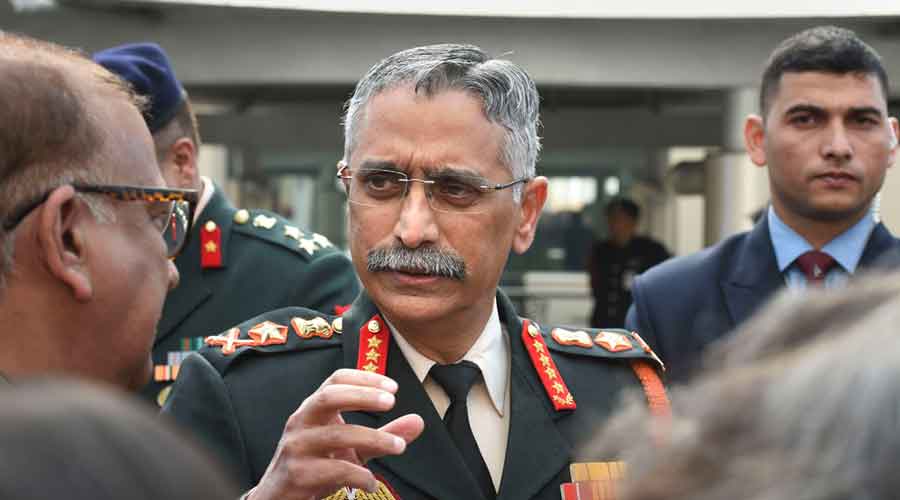 Army chief M.M. Naravane on Wednesday visited the forward areas along the Line of Actual Control (LAC) where Indian and Chinese troops have been locked in a border standoff since May and took stock of the army’s combat preparedness.

Sources in the Indian Army said Naravane visited forward areas of the Fire and Fury Corps, including Rechin La in the Chushul sector where Indian and Chinese soldiers are eyeball-to-eyeball. He interacted with the local commanders and troops and also undertook a first-hand assessment of the situation along the LAC.

The Fire and Fury Corps is responsible for the LAC in eastern Ladakh.

“The army chief reviewed the operational situation on the ground and also undertook on-the-spot inspection of the state of the habitats of the troops on the forward lines of defence at Rechin La,” said an official attached to the army headquarters in Delhi.

Rechin La is one of the several higher altitude areas in the Chushul sector where Indian soldiers are deployed at 14,000 feet above the sea level. Temperature there has touched minus 30 degrees Celsius.

Naravane also visited the forward base at Tara and interacted with the local commanders.

Sources in the army said that during his interaction with the troops, Naravane distributed sweets and cakes for Christmas to keep up the morale of the soldiers.

“The army chief was later given a detailed briefing about the ground situation at the multiple friction points in the region where Chinese troops have been occupying Indian territory,” said a defence ministry official.

The Indian Army has established habitat facilities for its nearly 50,000 additional troops deployed along the LAC amid the ongoing border standoff in the Ladakh sector.

This is the first time such a huge number of additional soldiers are being deployed in the forward areas of the LAC in the harsh terrain 12,000-14,000ft above sea level where temperatures are expected to dip to minus 40 degrees Celsius by next month.

Indian and Chinese troops have been locked in a face-off at multiple points — the Pangong Lake, Hot Springs and the Depsang Plains — since May and eight rounds of military talks between the two sides have failed to find a solution.

Sources said no breakthrough is expected in the coming months considering the Chinese tough stand and aggressive posture.

“The PLA is also yet to respond to fix the final dates for the next round of military talks,” the defence ministry official said.

Sources in the defence ministry said the army had increased its military readiness at the high altitude to deal with any Chinese provocation.

In the wake of the PLA’s massive deployment, the Indian Army has put in place mirror deployment along the LAC, backed by battle tanks, missile systems and frequent sorties by the Indian Air Force’s combat aircraft.