Advertisement
Home / India / In seat after seat in Uttar Pradesh, a quiet understanding

In many UP constituencies, candidates of the gathbandhan and Congress seem to be propping each other up to take on BJP 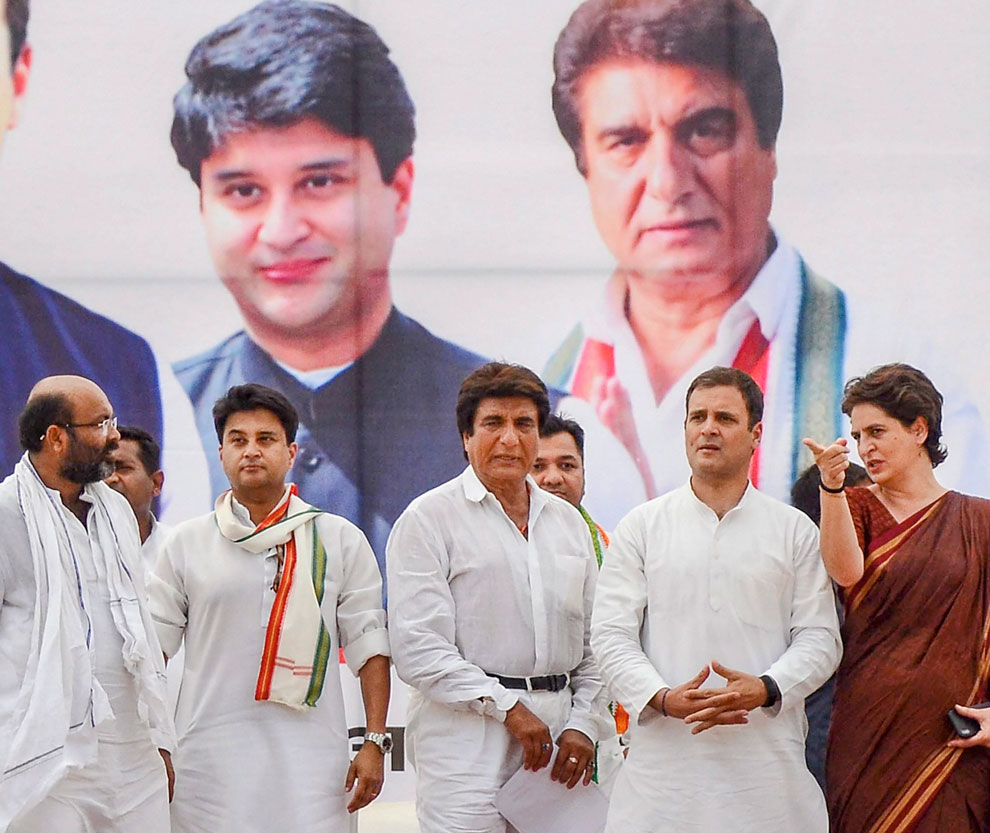 The gathbandhan — the SP-BSP-RLD alliance — and the Congress appear to have worked out a tactical understanding on the ground although Mayawati is mounting sharp attacks on the Congress in public, but it is unclear if this will be enough to avoid a split in anti-BJP votes.

In several constituencies across Uttar Pradesh, although not uniformly, candidates of the gathbandhan and the Congress seem to be propping each other up to take on the BJP.

In Fatehpur Sikri, for instance, Raj Babbar of the Congress has emerged as the main challenger to the BJP but his fate might depend on the gathbandhan candidate’s performance. Shribhagwan Sharma aka Guddu Pandit is a Brahmin contesting on the BSP’s “elephant” symbol.

Pandit is expected to come in a poor third but Congress managers are hoping he will poll a substantial number of Brahmin votes, which might otherwise have gone to the BJP, and help Raj Babbar snatch the seat.

In neighbouring Mathura, the temple town revered as Lord Krishna’s birthplace, it is the Congress that has fielded a Brahmin candidate, Mahesh Pathak, who could eat into BJP votes. The electoral battle here is seen as a direct fight between the BJP’s star face Hema Malini and the gathbandhan’s Narendra Singh, contesting on the Rashtriya Lok Dal’s “hand-pump” symbol.

In Meerut, the Congress has fielded Harender Agrawal, who belongs to the same Baniya (trader) community as the BJP’s Rajendra Agrawal. This was seen as a tactical move to eat into the BJP’s Baniya votes and help the gathbandhan nominee, the BSP’s Yakub Qureshi.

In Ghaziabad, the Congress has fielded Dolly Sharma, a Brahmin who is expected to draw upper caste votes and spoil Union minister V.K. Singh’s chances.

In Amroha, the Congress had initially fielded Rashid Alvi, whose candidature would have severely hurt gathbandhan candidate, Danish Ali of the BSP. But Alvi was withdrawn and in his place Sachin Chaudhary, a lightweight, was fielded.

In Rampur, where Muslims make up more than half the population, the Congress decided to field Sanjay Kapoor, a Khatri caste leader, is expected to help the gathbandhan’s Azam Khan.

Out of a list of nine candidates the Congress released for eastern Uttar Pradesh on Saturday, the selection of at least five — based on their caste, mostly non-Yadav OBCs — appeared likely to benefit the gathbandhan. Other than the upper castes, the BJP’s support base consists of the non-Yadav backward castes.

But again, in seats like Saharanpur, Bijnore and Badaun, the Congress has chosen not to help out the gathbandhan and fielded strong Muslim candidates. It was in Saharanpur that Mayawati reached out to Muslims and asked them not to vote for the Congress.

The gathbandhan was announced in January, with the Bahujan Samaj Party and the Samajwadi Party deciding abruptly not to include the Congress in it. While the BSP is contesting 38 seats, the SP is fighting on 37, and the Rashtriya Lok Dal on 3. The alliance is not contesting two seats — Rae Bareli and Amethi, represented in Parliament by Sonia Gandhi and Rahul Gandhi.

The Congress has avoided any public criticism of the gathbandhan in spite of Mayawati going hammer and tongs at the national party, questioning its manifesto and appealing to Muslims not to vote for it. The SP has been largely quiet, too.

Mayawati’s call to Muslims not to vote for the Congress does not seem to be working in Fatehpur Sikri. Although not a large presence in this constituency — once the short-lived capital of the Mughal Empire — unlike many other seats in western Uttar Pradesh, Muslims here are rooting for the state Congress chief.

“We are firmly behind Raj Babbar. He had done a lot of good work when he was an MP. We will support him and not the BSP candidate,” said Ramzani Shah of Midhakaur village. Raj Babbar has represented the seat in the past.

But the Muslim votes and the tactical help of the gathbandhan to erode the BJP’s Brahmin support might not be enough to counter Narendra Modi’s popularity. Raj Babbar also needs a chunk of the BSP’s core Dalit support base — the Jatavs — and here the absence of wider Opposition unity is being felt.

“Haarein ya jeetein, hum toh haathi par vote karenge (Win or lose, we will vote for the elephant),” said Atmaram, a Jatav, in rural Agra, a part of Fatehpur Sikri. Since the BSP had entered into an alliance with the SP and the RLD, Jatavs would vote for their candidates too. “Hamara vote pura transfer hoga (Our votes will get fully transferred),” Atmaram added.

Congress managers on the ground are hoping to ultimately secure a chunk of Jatav votes for Raj Babbar, arguing that the Dalit community will realise that votes for the BSP would go waste. Guddu Pandit’s criminal antecedents — he has mentioned seven criminal cases in his poll affidavit — are also being cited to argue all Jatavs might not support him “blindly”.

“People are saying that Guddu Pandit is a criminal and he doesn’t stand a chance to win. We usually don’t vote anyone other than the BSP but if we get a signal from our elders to vote for Raj Babbar, then we will,” said Hari Mohan, a Jatav associated with the Ambedkar movement.

Unless such a signal comes, in the absence of a formal alliance, the anti-BJP votes might split.

The BJP has fielded Rajkumar Chahar, a Jat. While in several other seats the Jats are backing the RLD, here they appear firmly behind the BJP. “It is not only a question of the BJP candidate being a Jat. It is the question of the country. The country needs a firm leader like Modi,” said Hottam Singh, a Jat voter.

Apart from the Jats, who account for a large share of the electorate in this constituency, the BJP has the support of other upper castes such as Thakurs and Brahmins, who have a substantial presence, and the minor OBCs and minor Dalits.