'I am appealing to as well as warning Muslims not to divide their votes this time. The Mahagathbandhan will throw out the BJP government,' says BSP chief 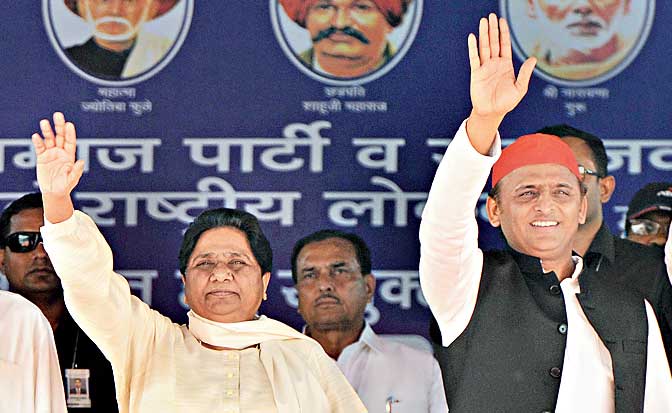 Mayawati on Sunday took a message to the Muslim heartland that should warm the hearts of the BJP.

Do not waste your votes on the Congress, the BSP leader appealed to the Muslim community as she held her first joint rally with ally Akhilesh Yadav in Deoband, home to the country’s oldest Islamic seminary Darul Uloom.

Deoband falls in the Saharanpur Lok Sabha constituency that votes on April 11.

“I am appealing to as well as warning Muslims not to divide their votes this time. The Mahagathbandhan will throw out the BJP government,” Mayawati said, sharing the dais with Samajwadi Party chief Akhilesh and RLD leader Ajit Singh.

If the Muslim votes are split between the BSP and the Congress, the biggest beneficiary is expected to be the BJP. The ruling party, which had won 71 of the state’s 80 Lok Sabha seats in 2014, is said to be banking on such a division of votes.

“There is a huge population of Muslims in west Uttar Pradesh, in general, and in Saharanpur, Meerut, Moradabad and Bareilly, in particular. I want to remind the community that the Congress is not in a position in entire Uttar Pradesh to challenge the BJP,” Mayawati told the rally in Deoband. “It is (only) the alliance of the BSP, SP and the RLD that can fight with the BJP.”

Akhilesh also slammed the Congress and said it was no different from the BJP. “The Congress does not want change in Uttar Pradesh. Its strategy is the same as the BJP’s,” he said, adding the BJP has divided India more than the British who had ruled the country by dividing Hindus and Muslims.

Muslims account for 20 to 49 per cent of the electorate in 26 seats that vote in the first few legs of the seven-phase election. Eight of them — Saharanpur, Kairana, Muzaffarnagar, Bijnor, Meerut, Baghpat, Ghaziabad and Gautam Buddha Nagar — vote on April 11, when the 2019 election gets under way.

The BSP has fielded a Muslim from Saharanpur despite Congress nominee Imran Masood’s impressive performance in the polarised elections of 2014.

Masood, who had lost to the BJP nominee by 65,000 votes, was among the few candidates who had polled more than four lakh votes in 2014.

Masood has been trying to win Dalit votes by supporting Bhim Army leader Chandrashekhar Azad, a youth leader who had shot into the limelight when the BJP government had him arrested over the May 2017 riot cases in Saharanpur.

Muslims in Deoband said the contest had become trickier, considering the third candidate who is also a Muslim fielded by the Mahagathbandhan. With both Masood and Lakhanpal being considered strong candidates, a feeling is growing that the minority votes would get split and benefit the BJP.

“Sensing this, a group of educated Muslim youths in the area are now visiting families and asking Muslims to go for tactical voting for the Mahagathbandhan candidate,” said Abshar Ahmed who is pursuing a post-graduation degree from Delhi.

There is a perception in the BJP that upper-caste Hindus, the other backward classes and a section of Dalits will vote for the party.

“This election is about Narendra Modi’s second term as PM and not local issues. People from across castes will vote for the most popular leader in the country and his several development schemes which has benefited people,” said a BJP functionary in Saharanpur.