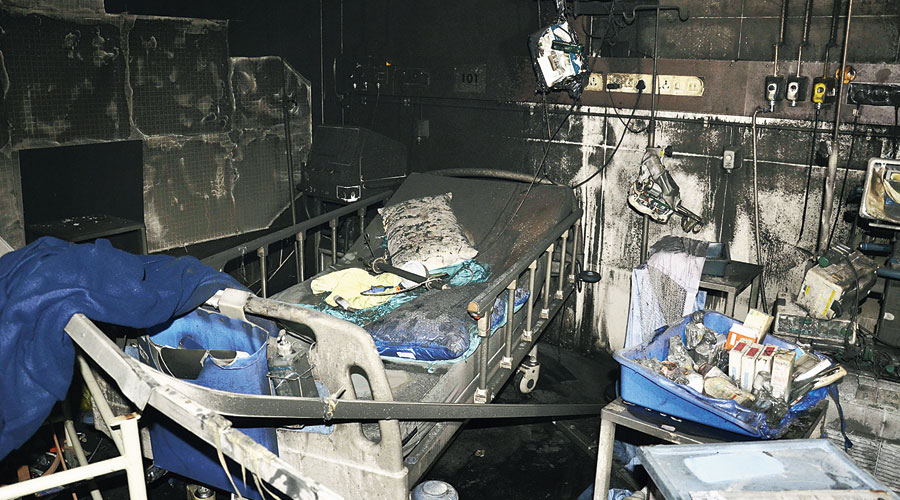 Five coronavirus patients died after a fire broke out in the ICU of a designated Covid-19 hospital at Rajkot in Gujarat early on Friday.

This was the seventh outbreak of fire at a Covid hospital in the past six months in Gujarat, Prime Minister Narendra Modi’s home state.

The Supreme Court, which took suo motu cognisance of the incident, chastised the Gujarat government for multiple incidents of fire at Covid hospitals, expressing shock at the lack of will to prevent such tragedies.

Gujarat deputy chief minister Nitin Patel said 26 patients at the hospital had been rescued and shifted to other facilities.

The fire broke out around 12.30am in the ICU on the first floor of the four-storey Uday Shivanand Hospital at Anand Bungalow Chowk. Around 31 patients were admitted at the time, Patel said.

Chief minister Vijay Rupani expressed grief over the incident and ordered a probe into the fire. He announced a compensation of Rs 4 lakh to the kin of each of the deceased.

Rajkot police commissioner Manoj Agarwal said: “Of the 11 coronavirus patients admitted in the ICU ward, five lost their lives in the fire.”

The preliminary probe has revealed that the fire was caused by a short circuit in a ventilator, Patel said.

The Supreme Court noted that incidents of fire at Covid hospitals had been taking place frequently in Gujarat.

“This is shocking! And let me say this is not the first incident. We are taking suo motu cognisance of this incident…. There are SOPs, there are guidelines but there is no will. This is not a solitary incident. Some measures need to be taken to prevent fires in hospitals,” a bench of Justices Ashok Bhushan, R. Subhash Reddy and M.R. Shah told solicitor-general Tushar Mehta appearing for the Centre.

The bench made the remarks when Mehta sought to argue that the Centre had already issued a standard operating procedure (SOP) to states and Union Territories on dealing with the pandemic.

The court asked the Gujarat government to file an affidavit to explain the steps taken to prevent the recurrence of such incidents.

“The incident is shocking and not the first of its kind. Those responsible must be brought to book,” Justice Shah, who hails from Gujarat, observed.

When Mehta said he would ask the Gujarat government to constitute a committee to deal with the rising incidents of fire, Justice Bhushan, heading the bench, replied: “We do not want a committee, we want proper steps to be taken.”

Justice Reddy, who had earlier been the Chief Justice of Gujarat High Court, asked: “The Union of India issues guidelines but what is the implementation of it in this state? No development of vaccines, everything is in trial stage! Look at the gatherings in states! A second wave of the crisis has already begun.”

“You need to go to the root cause of it (pandemic-related lapses)…” Justice Shah weighed in.

In a written order, the court said: “These incidents are being repeated from state to state and from hospital to hospital. “We notice that neither concrete steps have been taken by the states in this regard nor any mechanism to prevent or ameliorate the situation is in place….”

Mehta assured the court that the government would take preventive measures to deal with the situation.