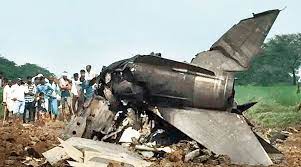 The SP said local police reached the spot and he is also on the way to the crash site.

The government said in Rajya Sabha on Monday that seven aircraft of the Indian Air Force have crashed in the last two years.

Minister of State for Defence Ajay Bhatt said this while replying to a question in the House.

"A total of seven aircraft of the Air Force have crashed in the last two years, including the Mirage 2000 which crashed recently in Madhya Pradesh," he said.

The minister said every aircraft accident in the IAF is investigated by a Court of Inquiry (CoI) to ascertain the cause of the accident.

Replying to a separate question, Bhatt said indigenously-developed Tejas aircraft is not being inducted as a replacement for MIG-21 fighter jets but as a part of the modernisation of the IAF.

He said an amount of Rs 6,653 crore was spent on the manufacturing of 24 Tejas jets till September 30.

Bhatt said 123 Tejas fighter aircraft are to be manufactured and that further production depends on the requirement of the services as well as possible exports.

Replying to another question on whether the government is planning to propose compulsory military training for youths, he said there is no such plan.

"Our armed forces have a large number of volunteers to draw upon and there is no problem in getting adequate numbers of volunteer recruits. All the able-bodied persons of the country, therefore, do not compulsorily need to be given military training," he said.

Asked about the AK-203 rifle contract with Russia, Bhatt said the first lot of 35,000 guns is required to be delivered within 10 months of making the advance payment to the Indo-Russian joint venture.

"The contract for procurement of quantity 6,01,427 Assault Rifles (AK-203) from Indo-Russian Rifles Private Limited (IRRPL) has been signed on December 6," the minister said.

"As per the contract, the first lot of quantity 35,000 rifles is required to be delivered by 10 months of the release of advance payment to IRRPL," he said.