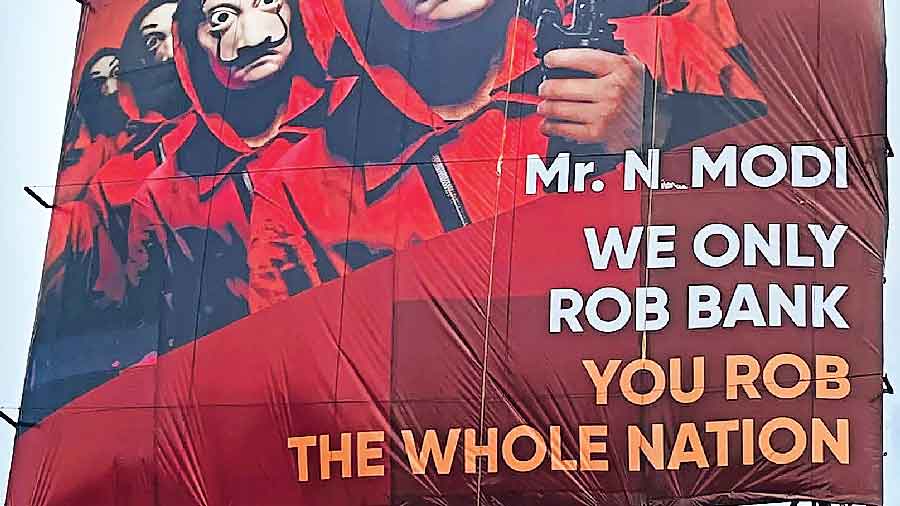 A tweet by TRS social media convener Satish Reddy on Friday shows a billboard, with images resembling the characters in Money Heist, that screams: Mr. N Modi, we only rob bank, you rob the whole nation
J.P. Yadav   |   Hyderabad   |   Published 03.07.22, 02:12 AM

Since Prime Minister Narendra Modi is always immersed in work while travelling, he may not have had a chance to take his eyes off the files that cry for his attention and catch the sights of Hyderabad, where he arrived on Saturday for the BJP’s national executive meeting.

Had the Prime Minister reached the city a day earlier and torn himself away from work, he might have noticed a purported billboard that screamed: “Mr. N Modi, we only rob bank, you rob the whole nation.”

The sledgehammer declaration was accompanied by pictures of the masked characters from Money Heist, the Netflix series that chronicles the saga of eight thieves and a criminal mastermind.

Whether or not the Prime Minister saw it, the city had taken note of such an image on Friday, thanks to a tweet by the ruling Telangana Rashtra Samiti social media convener, Satish Reddy.

“What creativity!! #Hyderabad #MoneyHeist,” Reddy tweeted, uploading the picture of the purported hoarding. The Prime Minister can check out the purported billboard on Reddy’s Twitter handle.

Reddy told The Telegraph that he had spotted the billboard near the city’s busy L.B. Nagar circle. Later on Friday, Reddy put out another tweet, saying the hoarding had “allegedly” been torn by BJP workers and showing a picture from which the words “N Modi” had been snipped out.

“Posters which just say ‘N Modi’ was torn by T-BJP (Telangana-BJP) Leaders. Maybe the poster was referring to Nirav Modi? Tearing it is an indication that the BJP is aware of who the robbers are,” his tweet said.

Nirav Modi is the fugitive accused of cheating Punjab National Bank out of crores of rupees. He is also known for appearing in a group photo with Prime Minister Modi in Davos.

Reddy told this newspaper that the hoarding had been put up by the “youth of Telangana” and that it was not the handiwork of the TRS.

Asked if he was sure it had been torn by BJP leaders, Reddy said: “I didn’t see who tore it. But it was allegedly done by BJP people.”

On Saturday — the day of Prime Minister Modi’s arrival — the so-called “youth of Telangana” struck again.

Reddy tweeted pictures of masked people, dressed like the characters from Money Heist, displaying placards that said: “We only rob bank. You rob the whole nation #BYEBYEMODI.”

“What’s happening in Hyderabad? Looks like #ModiHeist is much bigger than #MoneyHeist,” Reddy’s tweet said, attaching several pictures of the masked characters with the placards.

“The agenda of the youth of Telangana is also the agenda of the TRS, since Telangana means TRS,” Reddy happily added, accusing the Modi government of trying to “cripple” the southern state in the past eight years.

TRS boss and Telangana chief minister K. Chandrashekar Rao did not go to the airport to receive the Prime Minister but accorded the courtesy to Yashwant Sinha, the Opposition’s presidential candidate.

A tweet by TRS social media convener Satish Reddy on Saturday shows images of masked people resembling the characters in Money Heist with placards that say: We only rob bank. You rob the whole nation #BYEBYEMODI.”
PTI Picture

Sinha was received at the airport by KCR, as the chief minister is popularly known, hours before the Prime Minister landed. A massive bike rally was organised by the TRS from the airport to Jal Vihar, where KCR addressed a rally in support of Sinha.

At the rally, Prime Minister Modi drew flak. “Make-in-India is a big lie. People are losing their jobs and labourers are on the road,” KCR said.

The keen interest shown by the TRS and KCR in locking horns with the BJP is being seen here as a deliberate bid to turn the electoral tussle in the state into a triangular contest to the regional party’s advantage.

The Congress, with strong roots in the new state created through a bifurcation of Andhra Pradesh, is the principal Opposition but the BJP is now striving to grow. The TRS is said to be trying to cleverly focus on the BJP to put the Congress down, hoping it will make his job easy in the Assembly polls next year.

Union minister Smriti Irani slammed KCR for not going to the airport to receive the Prime Minister.

Addressing the media after BJP chief J.P. Nadda’s inaugural address to the national executive, Irani said: “KCRji has not insulted an individual but an institution.”

She accused the TRS chief of heading a “dynastic party steeped in corruption”.

BJP leaders declined comment on the “Money Heist” campaign. But a poster war seemed to have broken out on the streets of Hyderabad between the TRS and the BJP.

While the BJP put up cut-outs and banners of Prime Minister Modi and other party leaders, the TRS focused on pictures of KCR and Sinha.