Hundreds march in Delhi against 'attacks on Hindus' 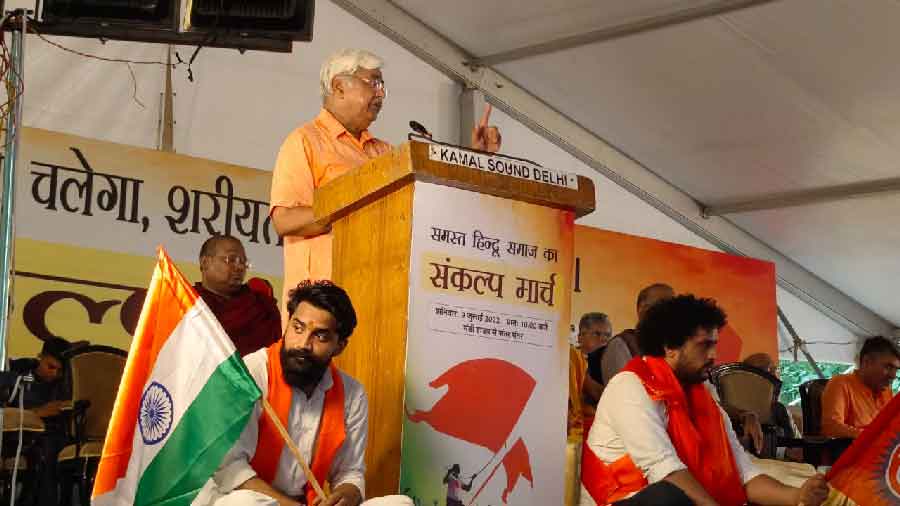 Roads in Lutyens' Delhi were awash with saffron on Saturday as hundreds, including political leaders and seers, carrying the tricolour and flags of various Hindu outfits participated in a 'Sankalp March' against "attacks on the community".

Chants of 'Jai Shri Ram', 'Vande Mataram' and 'Bharat Mata ki Jai' rent the air as the participants wound through main thoroughfares of the city as part of the march, which was organised by various Hindu groups, from the Mandi House area to Jantar Mantar.

A public meeting at Jantar Mantar saw former North Delhi mayor Avtar Singh issue a warning that those who target Hindus "will not be spared".

Tailor Kanhaiya Lal was hacked to death by two men with a cleaver at his shop in Udaipur's Dhan Mandi area on June 28 to avenge an "insult to Islam" after he shared a post on social media supporting suspended BJP spokesperson Nupur Sharma, who made controversial remarks on Prophet Mohammad.

Five people have been arrested in connection with the killing.

Addressing the gathering, Singh said, "Multiple Hindu groups have taken to the streets today for this 'Sankalp March'. We are here to raise our voices against the attacks on Hindus. They cannot be targeted or attacked... Those who target us will not be spared."

Backing Sharma, who was recently rebuked by the Supreme Court over her remarks on the Prophet that triggered protests, Kumar said she should be considered "innocent" unless the top court rules otherwise.

"Our country will only run as per the Constitution. I've heard statements of Nupur Sharma and she only gave two examples of Prophet Mohammad's life. Until the Supreme Court says that Nupur Sharma is guilty, everyone should consider her innocent. Two judges of the Supreme Court made an observation and it cannot be considered as a judgement," Kumar said.

The Supreme Court on July 1 came down heavily on Sharma for her controversial remarks on the Prophet, saying her "loose tongue" had "set the entire country on fire" and that she is "single-handedly responsible for what is happening in the country".

Refusing to entertain her plea for clubbing of FIRs lodged in various states against her over her remarks, the bench held that the comments were made either for cheap publicity, political agenda or some nefarious activities.

The VHP had earlier expressed disappointment over the top court's observations.

Sharma's remarks on the Prophet during a TV debate triggered protests across the country and drew sharp reactions from many Gulf countries. The BJP subsequently suspended her from the party.

BJP leaders Tajinder Pal Singh Bagga and Kapil Mishra were among those who took part in the march. Several VHP workers and seers from Rajasthan and Bihar also participated in the public meeting at Jantar Mantar.

Several roads in central Delhi were closed temporarily due to the march.

These roads, however, remained open for pedestrian movement.