The war against terrorism is gradually taking a communal turn 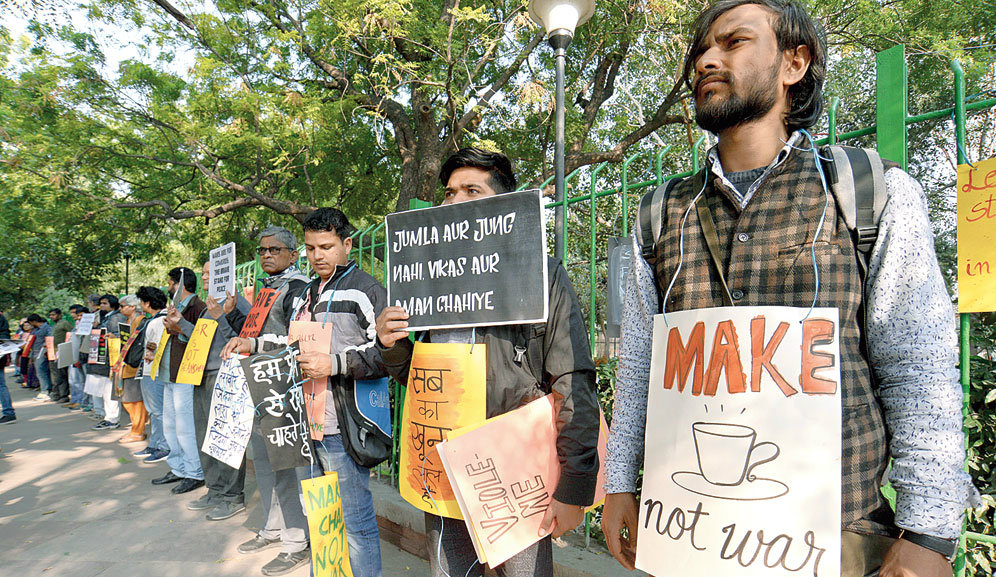 Class VI girl Eepsha Aamon stopped talking to a classmate who told her that “Pakistanis are bad and Modi is right to attack them”.

Sociology undergraduate Lakshmi Padmakumar is tired of the daily marches outside her flat, near Delhi University’s North Campus, with loudspeakers blaring: “Pakistan murdabad (death to Pakistan)!”

Both Eepsha and Lakshmi, born in the years after the Kargil conflict, were part of a human chain in front of the Jantar Mantar monuments, organised as an anti-war protest on Monday by a string of NGOs and trade unions.

Eepsha, from Father Agnel School in Noida, was accompanied by her mother Dithhi Bhattacharya, a trade union activist.

“Most of my classmates think that war is bad but some of them say we must destroy Pakistan,” Eepsha told The Telegraph. “I came today because my mother said we must do something if something bad is happening. I asked my friends if they wanted to come but their parents did not allow them.”

She added: “I stopped talking to my friend Ashnur, who wants to attack Pakistan, because killing people is bad. Killing people for selfish reasons is very bad.”

“It was heart-breaking for us that the Calicut Karachi Durbar restaurant in our hometown had to cover its signboard. Here, where we stay in Vijay Nagar, there are rallies every day with people shouting: ‘India zindabad, Pakistan murdabad’,” Lakshmi said.

“No one talks about the intelligence failure that led to (the) Pulwama (suicide attack that killed 40 CRPF personnel). People criticise the government in private but everyone is scared to speak in public.

“A Malayali student who was wearing a headscarf was heckled by a man on a street near the university and told to ‘Go back’. Where must she go? We are Indians.”

Abjith wore a mundu and carried a Malayalam placard with a quote from writer “Vaikom” Muhammad Basheer.

It went: “There will be no wars when leaders, lawyers, judges, policemen, teachers, journalists and soldiers are all afflicted with scabies so that they have time only to scratch.”

Abjith explained: “When people see someone wearing a different attire, holding a sign in a language they can’t read, they will come and ask you what it is. We then explain that we oppose war as it kills innocent people, not just terrorists.

“Being anti-war is considered anti-national today. We don’t need anyone’s certificate to speak what we think is right. It’s also about representing our identity and language.”

The protest being held near Parliament, the students enjoyed a semblance of security to air their views that they lack even on campus. Several of them carried placards.

Jawaharlal Nehru University Teachers Association president Atul Sood said he was driven to tears by the news of a Karnataka lecturer being forced to kneel and apologise for an anti-war Facebook comment that was critical of the BJP.

Several teachers across India have lost their jobs in the past three weeks over anti-war remarks following the Pulwama attack.

“One way to counter hooliganism is to come out in public and speak against those dividing the nation for political gain,” said Sood, who held up a banner carrying an Albert Einstein quote: “Peace cannot be kept by force; it can only be achieved by understanding.”

An auto driver stopped to ask one of the organisers — Anil Varghese of Citizens Against War — “where were you when Pulwama was happening?”

Varghese handed him a pamphlet and spoke to him. “It is for both the soldiers and other people that India and Pakistan must have a peace movement,” Varghese later told this newspaper.

“Causing more casualties (involves) tragic events that make no sense in the long run. Journalists and politicians wearing army uniforms in newsrooms and rallies trivialises this crisis into a fancy dress competition.”

After Pulwama, a writer's dilemma

After Pulwama, BJP politicians are tired of questions