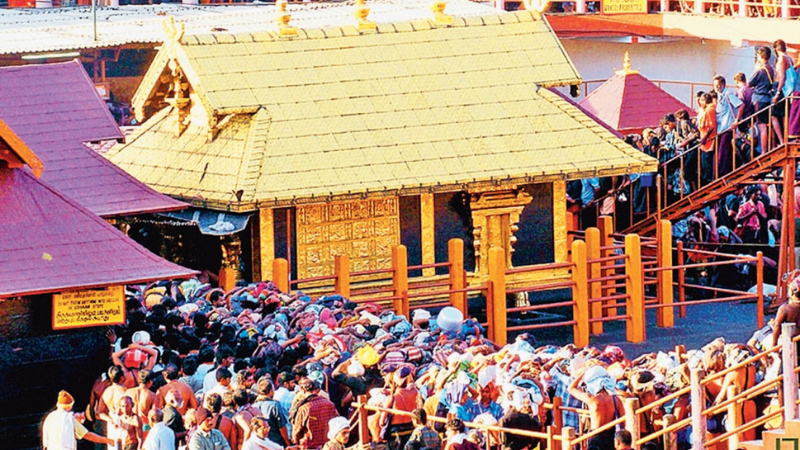 Several Hindu outfits in Kerala agitating against the entry of women of menstrual age into the Sabarimala temple have told media outlets not to 'take a stand which would aggravate the situation', a day before the shrine is to open for the second time after the Supreme Court judgment.

Several news media outlets had sent women journalists to the shrine when the Lord Ayyappa temple opened for the first time since the judgment last month. The women reporters were heckled, their vehicles attacked and young women devotees forced to turn back.

The appeal was issued by the Sabarimala Karma Samiti, a joint platform of right-wing outfits such as the Vishva Hindu Parishad (VHP) and the Hindu Aikyavedi. In its letter to editors, a copy of which was released to the media, the samiti said even the entry of women journalists belonging to this age group as part of their job was also likely to aggravate the situation.

'Recognising your right to support or oppose the devotees' stand on this issue, we hope you will not take a stand which would aggravate the situation,' the letter said.

Monday will be the second time the temple will open after the Supreme Court order. The doors of the temple will be opened on Monday evening for puja on the occasion of Chithira Aattavisesham on Tuesday, the birthday of the last King of Travancore, Chithira Thirunal Balarama Varma.

The temple will be closed at 10 pm on Tuesday but would reopen for darshan on November 17 for the three-month annual pilgrim season.

The samiti said devotees belonging to all denominations in Kerala and other parts of the country and even abroad were on a path of 'unabated' agitation after the apex court judgment.

It said that although the Supreme Court has decided to hear the review and writ petitions on the issue on November 13, the state government was intentionally ignoring the 'mass movement' against the judgment. 'In such a situation, the devotees are left with no other choice but to continue with the peaceful agitation,' it said.

The whole issue is about the adamant stand of the state government in forcibly bringing in young women aged between 10 and 50 years which is against the age-old traditions and customs of the Sabarimala Temple, the samiti said.