‘Not accused, nor hiding’ 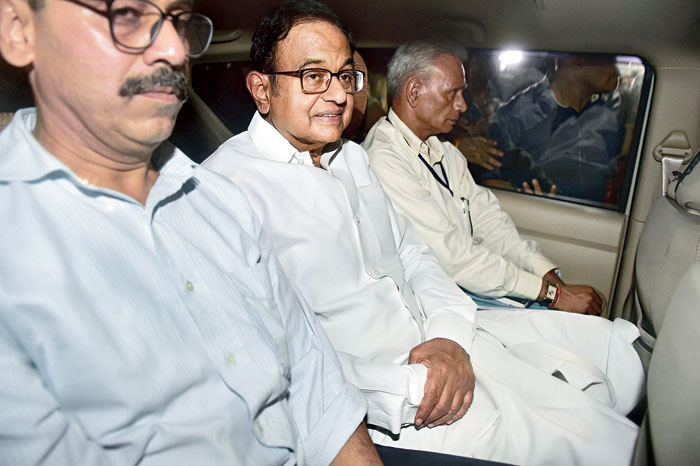 P. Chidambaram was on Wednesday night arrested by CBI officials who scaled a wall to enter his home, soon after he had addressed a news conference at the Congress headquarters where he denied being accused of any wrongdoing in the INX Media case.

Earlier, the former Union minister had failed to secure any relief from the Supreme Court after a tantalising daylong wait for “urgent” hearing of his plea, a day after Delhi High Court had denied him anticipatory bail in the corruption case. His plea is likely to be heard on Friday.

As soon as the court assembled at 10.30am, senior advocate Kapil Sibal sought urgent hearing before the bench of Justices N.V. Ramana, M. Shantanagoudar and Ajay Rastogi. But the bench said it would refer the matter to Chief Justice Ranjan Gogoi. Justice Gogoi was sitting on a constitution bench hearing the Ayodhya dispute. Sibal orally sought a stay on the high court judgment but the bench declined.

During the day, and before his arrest, both the CBI and the Enforcement Directorate issued “lookout circulars” against Chidambaram, claiming they had been unable to locate him since Tuesday night.

At the 8.15pm news conference, Chidambaram asserted he had so far not been accused of any offence in the case and that, contrary to rumours about his being “absconding”, he had been talking to his lawyers.

“While my lawyers were moving court, other lawyers and I worked through the night to prepare the papers. We completed the task only this morning and immediately filed the appeals in the court. Between now and Friday, I shall walk with clear conscience and my head held high.”

He added: “In the last 24 hours much has happened that has caused concern to some and confusion to many. In the INX Media case, I have not been accused of any offence. Nor has anyone else, including any member of my family…. There is no chargesheet…. The FIR recorded by the CBI does not impute to me any wrongdoing.”

He said “lies spread by pathological liars” had created the “widespread impression” that he and his son Karti had committed “grave offences”.

Hoping that “every judge in this country will uphold the liberty of a citizen”, he said: “If I am asked to choose between life and liberty, I shall unhesitatingly choose liberty.”

Chidambaram later returned to his Jorbagh home with party colleagues and lawyers Sibal and Abhishek Singhvi and was arrested soon after.

Some 20 plainclothes officials arrived and while the 10 ED officials among them waited at the rear gate, the 10 CBI officers scaled the shoulder-high boundary wall.

A CBI source conceded that the “unprecedented” footage of its officials climbing the wall would be “awkward” for the agency but claimed the “situation warranted it”.

“The gate was bolted; journalists were all over; some Congress supporters had gathered to block and gherao our officials. They had no option,” he said.

Asked why the urgency since Chidambaram was already in the house and was not fleeing, he said: “The officers acted according to instructions from the top.”

By 9pm, CBI director R.K. Shukla had reached the agency headquarters. Chidambaram was arrested at 10.22pm and driven to the agency

“It’s going to be a long night of questioning for him,” an official said. He hinted Chidambaram would be served food of his choice but would not say whether he would get a separate room, soft bed, pillow or mattress.

The case relates to the Foreign Exchange Promotion Board granting Rs 305 crore worth of FDI clearance to INX Media in 2007 when Chidambaram was finance minister.