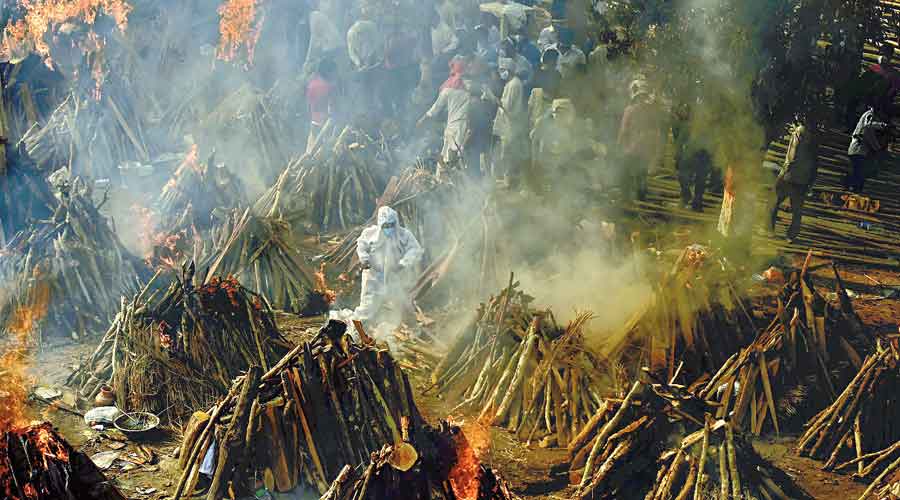 Health ministers of different states who attended the 14th conference of the Central Council of Health and Family Welfare (CCHFW) have slammed WHO for its estimate of 4.7 million Covid-related deaths in India, saying it is "baseless" and "intended to show the country in a poor light".

They said India has a robust, efficient and comprehensive system for registering deaths and all Covid fatalities are systematically recorded transparently following a legal process.

On Friday, a resolution was passed at the conference strongly objecting to WHO's estimates of Covid deaths in India.

It stated the WHO estimate is "unacceptable" to India and the modelling methodology used by the global health body to reach the figure was "flawed".

The three-day conference of the CCHFW, an apex advisory body of the Ministry of Health and Family Welfare, began in Gujarat's Kevadia on Thursday. It was chaired by Union Health Minister Mansukh Mandaviya.

Karnataka Health Minister K Sudhakar questioned the modelling methodology used by WHO to arrive at the death estimate, alleging that it was an attempt to "tarnish" India's reputation.

"There is no rationale behind the modelling methodology used by WHO to arrive at the estimate. All health ministers at the conference here have condemned the report and passed a resolution against it. We have urged Union Health Minister Mansukh Mandaviya to convey India's disappointment to WHO and raise it at higher international forums," he told PTI.

"We stand by our numbers because there is a robust, legal and transparent system for data collection and Covid mortality surveillance. It's a sheer attempt to malign India which has done good work on Covid management. There seems to be a malafide intention behind the report," Sudhakar said.

Punjab Health Minister Vijay Singla alleged that WHO's death estimate was "fabricated" and it has not made a proper calculation to arrive at the figure of 47.4 lakh Covid-related deaths.

"India has a strong data collection system and there is no reason to doubt its authenticity. The modelling methodology used by the global health body was not scientific," he said.

Madhya Pradesh Minister of Medical Education Vishwas Sarang alleged there was a conspiracy to belittle India's achievements on the COVID-19 front starting from the low mortality rate to the high vaccination coverage.

"The figures by WHO are erroneous and not based on sound mathematics. All health ministers at the conference rejected the WHO report saying it was not founded on facts," he said told PTI.

Sarang said that "20 to 22 health ministers, including those from states not ruled by the BJP, unanimously rejected the WHO report".

Echoing similar sentiments, Health Minister of Sikkim M K Sharma and his Bihar counterpart Mangal Pandey alleged that the WHO report was "devoid of facts" and its modelling methodology was "not scientific".

It's a deliberate attempt to portray India in a poor light, they claimed, adding registration of births and deaths in the country is extremely robust and is governed by the decades-old statutory legal framework the Births and Deaths Registration Act, 1969.

The Union Health Ministry on Thursday strongly objected to the mathematical models used by WHO for projecting excess mortality estimates linked to the pandemic given the availability of authentic data, saying the validity and robustness of the models used and methodology of data collection were questionable.

India is likely to raise the issue at the World Health Assembly and other multilateral forums, sources in the ministry said.

"Despite India's objection to the process, methodology and outcome of this modelling exercise, WHO has released the excess mortality estimates without adequately addressing India's concerns," the Union Health Ministry said.

India had also informed WHO that given the availability of authentic data published through the Civil Registration System by the Registrar General of India, mathematical models should not be used for projecting excess mortality numbers for India.

"India firmly believes that such robust and accurate data generated through the legal framework of a member state must be respected, accepted and used by WHO rather than relying on less than accurate mathematical projection based on non-official sources of data," the statement added.