Videography survey concludes at 10.15am amid tight security, court hearing on Tuesday 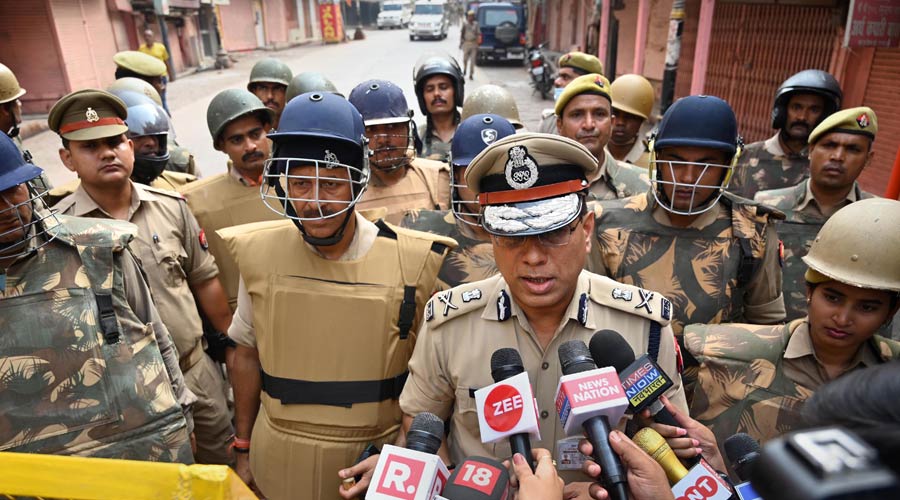 Commissioner of Varanasi Deepak Agrawal interacts with media during the third and last day of a videographic survey at Gyanvapi Mosque complex, in Varanasi, Monday, May 16, 2022.
PTI Photo
Our Bureau   |   Varanasi   |   Published 16.05.22, 01:55 PM

A court in Uttar Pradesh's Varanasi ordered that a pond in the Gyanvapi mosque complex be sealed, amid reports that a "Shivling" had been found in it on Monday when a videography survey was conducted.

The court-mandated three-day videography survey of the Gyanvapi Masjid complex in Uttar Pradesh's Varanasi ended on Monday, a day before the next hearing of the case in court. The last day of filming began this morning amid tight security and restrictions near the complex.

Water was drained from the pond this morning and a "Shivling" was found, claimed a lawyer representing a group of Hindu women who have sought year-long access to pray at the shrine behind the mosque, reports ndtv.com.

The pond, which is used for the Islamic "Wazoo", or purification ritual, must be sealed, the petitioners asked a local court. The court accepted the plea and ordered the Varanasi District Magistrate to ensure that the pond wasn’t  used as of now.

A court-mandated videography survey of the Gyanvapi Masjid complex, which was carried out for the third consecutive day, started at 8 am and concluded at around 10:15 am.

Reports about a "shivling" being found within the mosque complex had not been confirmed earlier by the Varanasi District Magistrate, Kaushal Raj Sharma, the ndtv.com report added.

"No details of the survey of Gyanvapi mosque were disclosed by any member of the commission. The court is the custodian of the information about the survey. One member was debarred from the commission for about a few minutes yesterday, later admitted to the commission," Mr Sharma had said.

The survey team filmed three domes, underground basements, pond and will share the findings with the court tomorrow. "If the report is not finished on time, we will ask the court for more time," the government lawyer Mahendra Prasad Pandey told NDTV.

"After working for over two hours, the court commission concluded its work on Monday at around 10.15 am. All parties were satisfied with the work," Varanasi District Magistrate Kaushal Raj Sharma told reporters here.

In his order on Thursday last, District Civil Judge (Senior Division) Ravi Kumar Diwakar had turned down a plea by the mosque committee to replace Ajay Kumar Mishra, who was appointed advocate commissioner by the court to survey the Gyanvapi-Gauri Shringar complex.

The district court had said that locks should be broken if the keys are not available to access certain areas of the complex for the survey. It also asked district authorities to register FIRs if the survey was not allowed.