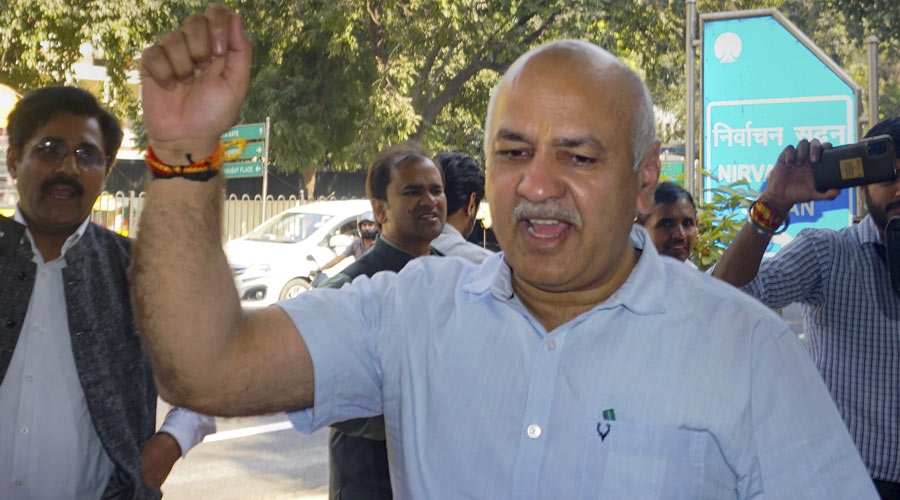 The Aam Aadmi Party's Surat East Assembly seat candidate in Gujarat withdrew his nomination on Wednesday, with the AAP alleging he was abducted at the behest of the BJP and pressured to do so, a charge denied by the ruling party.

Addressing a press conference in Delhi, Deputy Chief Minister Manish Sisodia said their Surat seat candidate Kanchan Jariwala had been missing along with his family members since Tuesday.

"In this election, the BJP is miserably losing in Gujarat and has become so rattled that it has stooped to the level of kidnapping our candidate from Surat East," Sisodia alleged.

The BJP has fielded its sitting MLA Arvind Rana from the seat.

Elections for the 182-member Gujarat Assembly will be held in two phases on December 1 and 5 and the counting of votes will be taken up on December 8.

State AAP president Gopal Italia claimed their Surat East candidate Kanchan Jariwala appeared before the office of the Returning Officer on Wednesday under heavy police protection and surrounded by "BJP goons" to withdraw his candidature under the pressure of the ruling party.

When mediapersons questioned Jariwala, he was hurriedly whisked away by the persons surrounding him.

Italia alleged that Jariwala had gone missing and was allegedly taken to an undisclosed location by the BJP goons who put pressure on him to stay away from the election.

Sisodia said, "This is not just kidnapping of our candidate, but kidnapping of democracy. This is a very dangerous situation in Gujarat."He appealed to the Election Commission to take cognisance of it.

However, Surat city BJP president Niranjan Zanzmera refuted the allegations and said the AAP should instead "take care of its own house."Italia said the AAP will take advice of its legal team for further action into the matter.

"The BJP first wanted to get Jariwala's nomination invalidated on the last date of the process on Tuesday. When his nomination was accepted, the BJP goons took him to some undisclosed location...We could not find him anywhere until Wednesday morning. His relatives told us that he was put under huge pressure to stay away from the election," Italia claimed while talking to reporters in Surat.

Italia further said the way Jariwala appeared to withdraw his nomination suggested that he was under "huge pressure."

"Why else would he come to the office under heavy police protection and with 50-100 goons if he intended to withdraw his candidature on his own?" Italia asked.

AAP's Gujarat co-incharge Raghav Chadha alleged that the "BJP goons" kidnapped Jariwala on Tuesday to put pressure on him to withdraw his candidature.

"The BJP is so scared in Gujarat that it has started kidnapping the AAP candidates," the Rajya Sabha member claimed.

Chadha said the party has informed the Chief Electoral Officer about it, and a written complaint will be submitted. Local police and administration have also been informed about it, he said.

Surat Police Commissioner Ajay Tomar told PTI that the issue has come to his notice.

"I have come to know about it and we are trying to find out. I have put my teams on the job and we will find it out. We have not received any formal complaint yet but since this has come to my notice, I am working on it," the police official said.