No comment on farmers’ main demand to repeal three laws 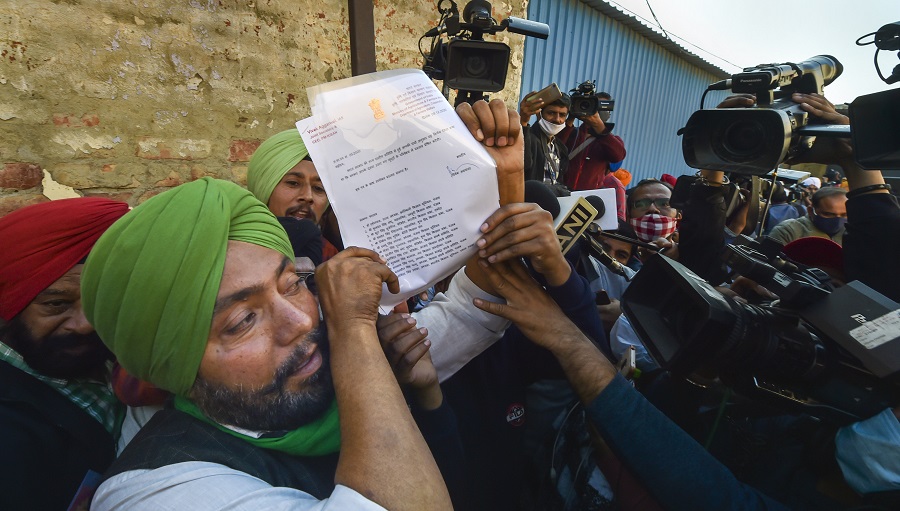 A representative of a farmers' union at the SInghu border holds up a copy of the government's draft proposal sent to them on Wednesday.
PTI
Our Bureau, Agencies   |   New Delhi   |   Published 09.12.20, 05:03 PM

The Centre on Wednesday said it was ready to give a “written assurance” to protesting farmers that the existing Minimum Support Price (MSP) regime for procurement would continue to function but was silent on their primary demand of repealing the laws.

In a draft proposal sent to 13 farmers’ bodies, the Centre said that the government was ready to provide all necessary clarifications on their concerns about the new farm laws enacted in September. It also proposed to make required amendments on at least seven issues that farmers complained about regarding the new laws, including one to allay fears about the weakening of the mandi system.

The Centre has not touched one of the three laws, The Essential Commodities (Amendment) Act, 2020, at all in its draft proposal. Instead, it has proposed seven amendments to the two other laws -- The Farmers Produce Trade and Commerce (Promotion and Facilitation) Act, 2020 and The Farmers (Empowerment and Protection) Agreement of Price Assurance and Farm Services Act, 2020.

In the proposal, sent by agriculture ministry joint secretary Vivek Aggarwal, the government said it was ready to consider with an open heart the issues which farmers have on the new laws.

“The government has tried to address the concerns of farmers with an open heart and with respect for the farming community of the country. The government appeals to the Kisan unions to end their agitation,” the draft proposal said.

On farmers' concern that mandis would weaken after the enactment of the new laws, the government said an amendment can be made wherein state governments can register the traders operating outside mandis. States can also impose tax and cess as they used in APMC (Agricultural Produce Market Committee) mandis on them.

On concerns that farmers may be duped as anyone having just a PAN card was allowed to trade outside APMC mandis, the government said to rule out such apprehensions, the state governments can be given the power to register such traders and make rules keeping in mind the local situation of farmers.

On fears that big corporates will take over farmlands, the government said it had already been made clear in the laws, but still, for clarity's sake, it can be written that no buyer can take loans against farmland nor any such condition will be made to farmers.

On attaching farmland under contract farming, the government said the existing provision is clear but still it can be clarified further if required.

On fear about the scrapping of the MSP regime and shifting of trade to private players, the government said it was ready to give a written assurance that the existing MSP will continue.

On demands to scrap the proposed Electricity Amendment bill 2020, the government said there won't be any change in the existing system of electricity bill payment for farmers.

On farmers' demand to scrap the Air Quality Management of NCR Ordinance 2020, under which there is the provision of penalty for stubble burning, the government said it was ready to find an appropriate solution.

The draft proposal was received by 13 agitating agricultural union leaders, including Joginder Singh Urgrahan of BKU (Ekta Ugrahan), whose party is one of the biggest among the 10 farm bodies. “Farmer unions have received the draft proposal from the government,” Bharatiya Kisan Union (BKU) national spokesperson Rakesh Tikait  told PTI.

Home minister Amit Shah, at Tuesday night's meeting with 13 union leaders, had said the government would send a draft proposal on key issues raised by the farmers regarding the three farm laws, even though the meeting had failed to break the ice with farm union leaders who are insisting on repealing these laws.