Advertisement
Home / India / Government trying to end protest by blaming us, say farmers
‘We are not scared of police notices’

Government trying to end protest by blaming us, say farmers 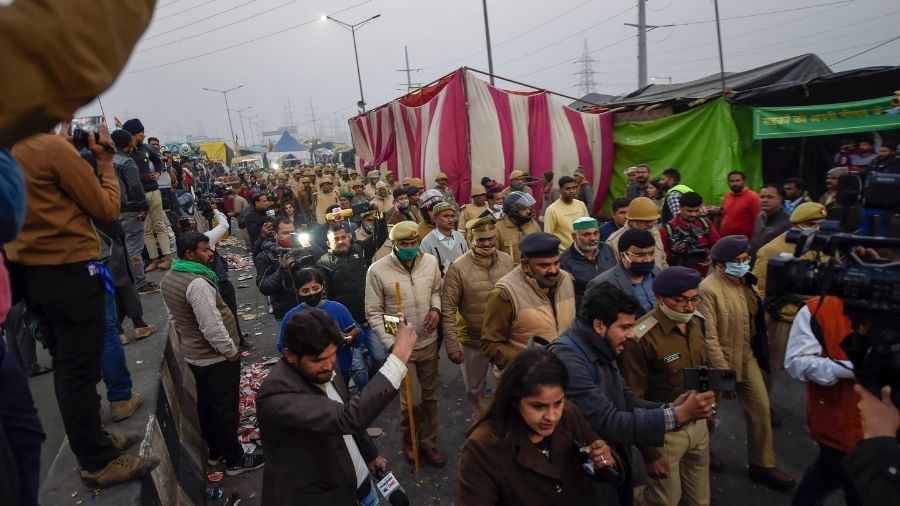 The Samyukta Kisan Morcha, an umbrella body of 41 farmers’ union, alleged on Thursday that  the government was trying to put an end to the farmers’ movement against the contentious agriculture laws by blaming it for the violence during the January 26 tractor rally.

It also said that they won’t be intimidated by the notices sent to its leaders by Delhi Police.

The Morcha has been protesting against the Centre’s three farm laws at various border points of Delhi.

In a statement, it said, “We will not be intimidated by the notices being sent by the Delhi Police and will respond to the same. The BJP government (at the Centre), along with its state governments, is trying its best to put an end to this movement by blaming SKM for the events of 26th January and this is not acceptable. The police are doing their best to evacuate several dharnas.”

“Instead of taking action against the real criminals, the police are instead arresting farmers who were protesting peacefully. Police have also seized their vehicles. We condemn the eviction of protesters at Palwal where the police instigated locals and flared up divisive sentiments,” it added.

The Delhi Police on Thursday issued lookout notices against farmer leaders named in FIRs in connection with the violence during the farmers’ tractor parade on Republic Day.

According to officials, the farmer leaders who have been named in the FIRs will also be asked to surrender their passports.

“We condemn the action by Uttar Pradesh police in cutting off basic facilities for the protesting farmers at Ghazipur and its attempts to evict the farmers forcibly today. Leaders like Rakesh Tikait, Tajinder Virk and K K Ragesh resisted this police behaviour peacefully.

“The government's efforts to discredit the ongoing farmers' movement are continuing. The nervousness of the government is evident from how it is installing security forces on all borders. The government wants to show this movement as ‘violent’ again and again, but the Samyukta Kisan Morcha has a unanimous approach to ensure that the movement will remain peaceful,” it said.

On Thursday, a Sadbhavana Yatra was taken out by farmer union leaders at the Singhu border protest site.

“This was against the divisive forces trying to divide the protesting farmers along religious lines and as per states and to reinforce the feeling of unity between the farmers,” the morcha said.

The Delhi Police detained 15 more people on Thursday, for their suspected involvement in the violence during the farmers' tractor parade in the national capital on January 26, officials said.

Nearly 30 farmers who were camping at DDA Ground in Burari were also moved towards the Singhu border to clear the site, they said.

The police also stepped up security at the Red Fort, which was stormed by a large number of protesting farmers who deviated from the designated parade route on Tuesday, and Singhu and Tikri borders, the officials said.

Thousands of farmers protesting against the Centre’s new farm laws had clashed with the police during the tractor rally called by farmer unions to highlight their demand for the repeal of the legislations.

Many of the protesters reached the Red Fort and entered the monument. Some of them even hoisted religious flags on its domes and the flagstaff at the ramparts.

“Around 15 people have been detained for their suspected involvement in the violence on Republic Day and for violating laws,” Additional Delhi Police PRO Anil Mittal said.

Nearly 30 farmers who were protesting at DDA Ground in Burari have been moved towards the Singhu border, he said.

The ground will be cleared soon, the police said.

A senior police officer said security at the Red Fort has been stepped up after Tuesday’s incident.

Police personnel have also been deployed in large numbers at the city's Singhu and Tikri borders, the officer said.

Earlier in the day, the Delhi Police said its Special Cell will investigate the “conspiracy” and “criminal designs” behind the violence on Republic Day.

As of Thursday, the police had filed 25 criminal cases, arrested 19 people and detained 200 in connection with the violence.

Nearly 400 police personnel were injured in the clashes with the protesters, according to officials.