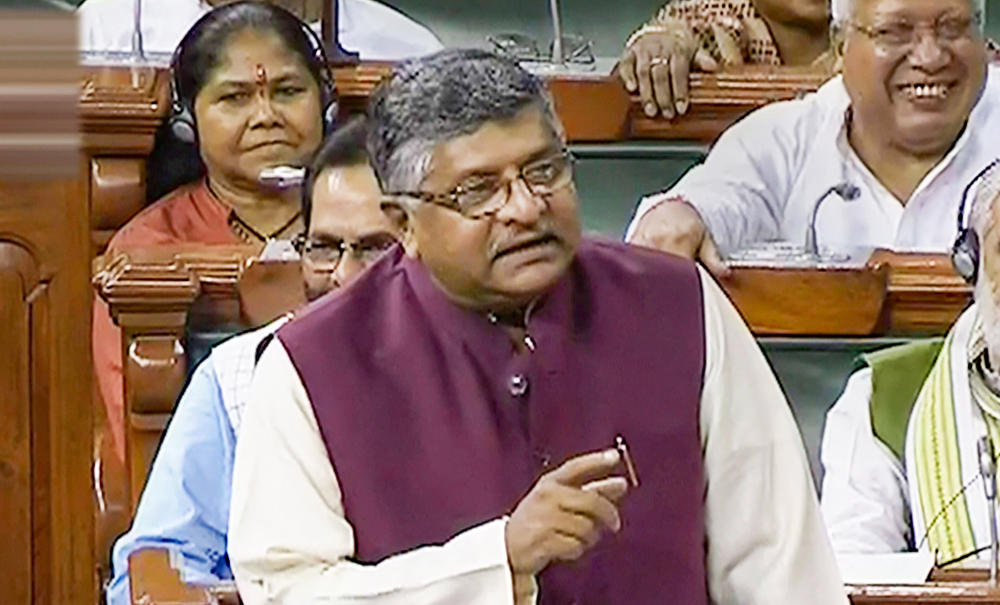 The Lok Sabha on Thursday took up for consideration the contentious bill to make the practice of instant triple talaq illegal with up to three years in jail for the husband.

Moving the bill for consideration, Law Minister Ravi Shankar Prasad said the legislation was a must for gender equality and justice as despite an August 2017 Supreme Court verdict striking down the practice of instant triple talaq, women are being divorced by 'talaq-e-biddat'.

He said, since January 2017, as many as 574 triple talaq cases and since the Supreme Court order, more than 300 such cases were reported by the media.

”Under this circumstances, what should we do? Should we allow Muslim women to be continued to be exploited,” he said.

The law minister said 20 Muslim countries in the world, including Pakistan and Malaysia, have banned the triple talaq. Why can't a secular India do it?,” he asked.

Prasad said there were three different judgments of the five-judge bench of the court and in one of the judgments, the court said Triple Talaq is part of the 'Shariah' and a law should be enacted to end the practice.

”The core philosophy of our Constitution is gender justice, irrespective of religion. We want to give honour and justice to the women,” he said.

The law minister asked the MPs not to see the proposed legislation through the prism of politics or religion.

Prasad said to allay fears that the proposed law could be misused, three new provisions have been incorporated in the bill, which are: only a close relative of the victim can file a case, there is an option of compromise and a magistrate can give bail to the accused after hearing the victim.

Opposing the bill, RSP member N.K. Premachandra said the bill has been brought with an “ulterior political motive to target the Muslim community” and “specific political agenda of the BJP”.

”You are bringing the bill on the basis of the minority judgement of the court. If you have so much of concern, why don't you bring a legislation to end the incidents of mob lynching. What is your stand on Sarbarimala temple,” he asked.

Premachandran said the ordinance on the subject was a ”fraud on the Constitution” as a civil matter is being converted into a criminal matter.

”How can a jailed husband give compensation to the wife,” he said.

He also said there is no provision of imprisonment for divorce in Hindu and Christian communities.

”This is not a move to protect Muslim women but to harass Muslim husbands,” he said.

Three ordinances have so been promulgated as a similar bill moved by the previous government could not get parliamentary nod.

A fresh bill was introduced by the new government in June during the ongoing Parliament session.

Under the Muslim Women (Protection of Rights on Marriage) Bill, 2019, divorcing through instant triple talaq will be illegal, void and would attract a jail term of three years for the husband.