The comment prompted Amit Shah to pull up his motormouth colleague 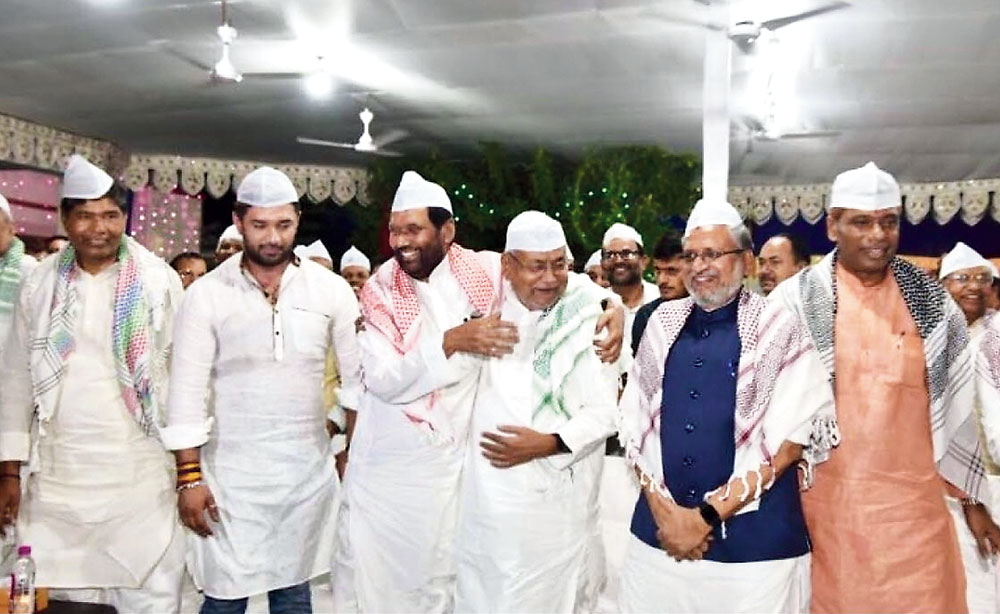 A BJP leader fresh from promotion to the Union cabinet taunted Bihar chief minister and ally Nitish Kumar for attending iftar events just “for show”, a comment that apparently prompted Amit Shah to pull up his motormouth colleague.

Giriraj Singh, who was elevated to the cabinet in the new Narendra Modi government from minister of state with independent charge in the previous one, on Tuesday morning tweeted four pictures from three different iftars, saying: “How beautiful the pictures could have been had falahaar (fruit feast) been organised with similar enthusiasm during Navratri. We lag behind in our own rituals and religion but are ahead in showing off.”

The iftars had been organised by the Janata Dal United, another BJP ally Ram Vilas Paswan of the Lok Janshakti Party (LJP) and Opposition alliance member Jitan Ram Manjhi of the Hindustani Awam Morcha Secular (HAMS).

Nitish had attended the iftars at a time relations with the BJP were tense following a stand-off over ministry allocation at the Centre. Although the photographs featured several leaders from different political parties, including deputy chief minister Sushil Kumar Modi from the BJP, Nitish was present in all of them and the purpose behind Giriraj’s swipe was not lost on anyone.

Worse, the tweet was uploaded in the holy month of Ramazan and on the eve of Id, and the tone stood out against Prime Minister Modi’s outreach to the minority communities soon after he had stormed back to power.

Nitish’s JDU took umbrage at the comments of Giriraj, the MP who defeated Kanhaiya Kumar in Begusarai, and demanded that the BJP take action against such leaders.

The war of words reverberated through the day and threatened to spiral out of control, forcing BJP chief Shah to pull up Giriraj, party sources said.

The sources said Shah called up Giriraj and asked him “to desist from making such comments”. The BJP chief, according to the sources, also warned Giriraj that “henceforth such complaints should not come”.

Giriraj’s tweet came at a time when there is perceptible stress between the JDU and the BJP.

The BJP had offered the JDU a solitary cabinet berth as a “symbolic representation”. The JDU had rejected the offer on the ground that it should have been proportionate to the number of Lok Sabha members it had.

Nitish had responded in kind by expanding his ministry and offering one berth to the BJP, which did not accept it.

The tension mounted on Monday as Opposition Grand Alliance leaders invited Nitish to return to their fold to counter the BJP. That very evening, the chief minister attended an iftar event organised by Grand Alliance member Manjhi, to which the BJP was not invited.

Reacting to Giriraj’s comments, JDU chief spokesperson Sanjay Singh said: “It is clear from Giriraj’s tweet that the BJP has no control over such leaders. The Prime Minister had said at the recent meeting of his parliamentary party that he would rein in leaders who speak the language of hatred and communalism. The time has come for the BJP to take the comments of Giriraj seriously and act against him.”

LJP leader and Jamui MP Chirag Paswan also reacted to Giriraj’s statement by asserting that he and his party believed in “communal harmony and equality of all religions”.

The verbal salvos continued till evening, forcing Nitish to react to Giriraj’s comments.

“He has done all this to remain in the media limelight. His comments have become news and his wishes have been fulfilled,” the chief minister said while coming out of a government programme.

As the Opposition Congress too jumped in and its spokesperson Prem Chandra Mishra said it indicated that “the Assembly polls in the state would see new political equations”, the BJP swung into damage-control mode.

At first, deputy chief minister Sushil Modi said: “Prasad during Chhath festival is distributed at the chief minister’s house every year. Nitish does falahaar too and celebrates New Year also. I am a Hindu and am proud of it, but I have been organising iftar for the last 25 years. People who are taunting iftars do not even organise Holi gatherings.”

But with relations between the allies plummeting, it was left to Shah to draw the line for Giriraj.