The three defence services — the army, navy and the air force — bar homosexuality, although not explicitly 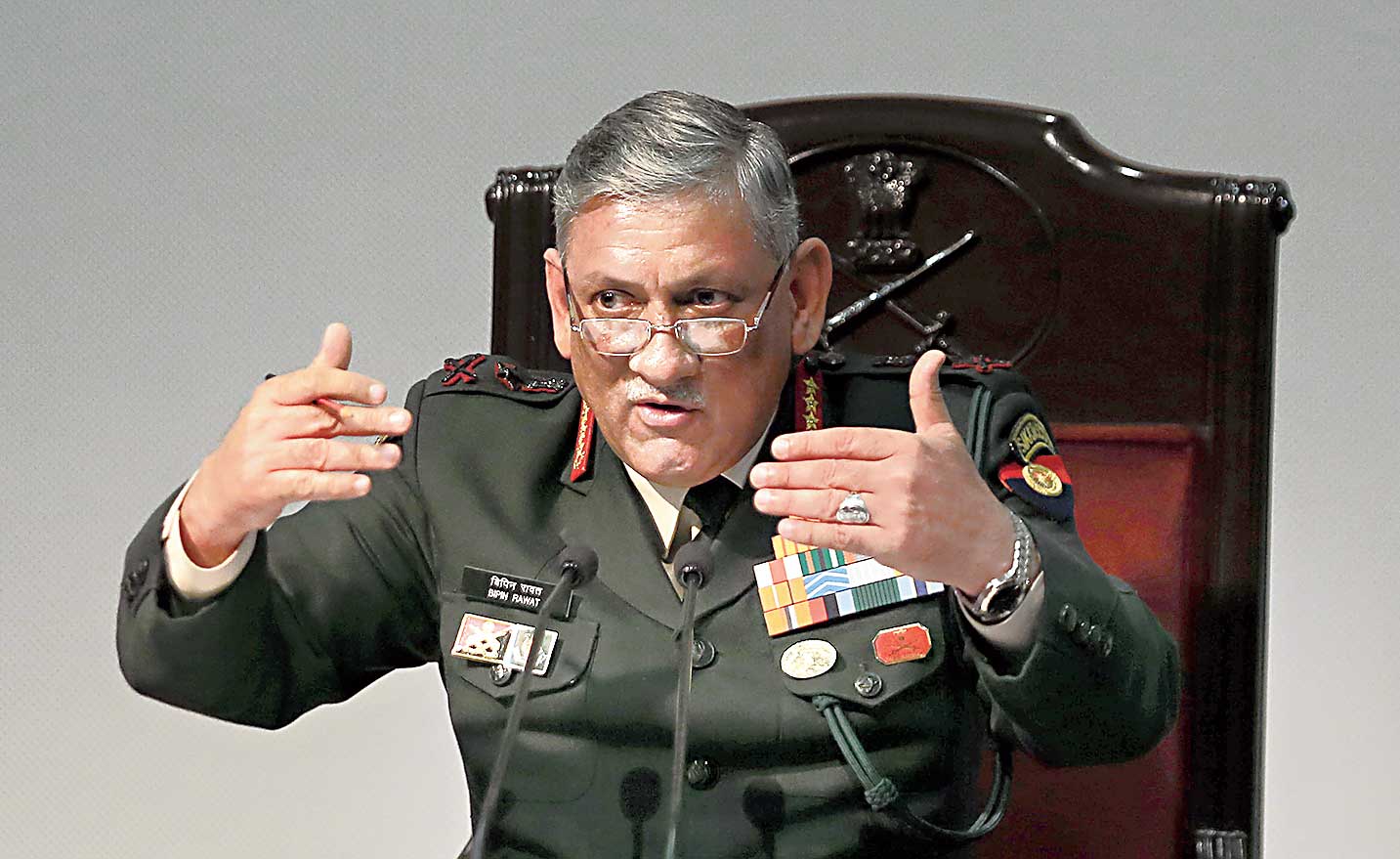 “The army is conservative. We will not let this perpetrate in the army. We will still be dealing with them under various sections of the Army Act,” Rawat said.
(Prem Singh)
Our Special Correspondent   |   New Delhi   |   Published 10.01.19, 09:52 PM

Army chief Gen. Bipin Rawat on Thursday said gay sex and adultery wouldn’t be allowed in the force, months after the Supreme Court decriminalised homosexuality and struck down a colonial-era adultery law.

“I think anything what is being said or talked about will not be allowed to happen in the Indian Army,” Rawat told a media conference while replying to a question about the impact of the two verdicts.

The Army Act bars both homosexuality and adultery and offenders, Rawat said, would continue to be punished under legislation governing the military.

“We are not above the country’s law, but when you join the Indian Army, some of the rights and privileges you (civilians) enjoy are not what we have. Some things are different,” Rawat told the media conference ahead of Army Day on January 15.

A five-judge constitution bench of the Supreme Court had last September unanimously decriminalised part of a 158-year-old colonial-era law that made “unnatural” sex a criminal offence under Section 377, saying it violated the right to equality.

Rawat had initially been asked about the gay sex verdict. The general ruled out enforcing the verdict in the force.

“We will not allow this to happen in the army,” he said.

The three defence services — the army, navy and the air force — bar homosexuality, although not explicitly.

Section 45 of the Army Act, 1950, talks about the “unbecoming conduct” of officers, while Section 46(a) says any person guilty of any disgraceful conduct of a “cruel, indecent or unnatural kind” will, on conviction by court-martial, face up to seven years in jail.

The Navy Act says personnel guilty of any “indecent act” can be jailed for up to two years. Another provision in the same act spells out the same punishment for officers guilty of any “scandalous or fraudulent conduct or of any conduct unbecoming the character of an officer”.

The US Army, counted among the mightiest fighting forces in the world, had also tried to exclude homosexuals and homosexual acts were ground for discharge from service.

But a compromise was reached in 1993 through a policy known as “Don’t Ask, Don’t Tell” that allowed gay, lesbian and bisexual Americans to serve if they kept their sexual identity under wraps.

In 2011, then President Barack Obama ended the secrecy policy and restrictions on service by gay, lesbian and bisexual personnel were lifted.

At Thursday’s conference, the question on the gay sex verdict led to another that the top court had passed last year when it struck down a colonial-era anti-adultery law, which, it said, treated a woman as her husband’s “chattel”.

The scrapped law provided for punishing a man for an affair but not the woman.

Rawat ruled out implementing this verdict too.

“The army is conservative. We will not let this perpetrate in the army. We will still be dealing with them under various sections of the Army Act,” he said.

The Army Act governs the conduct of army personnel.

“The army is a family,” he said, adding that soldiers and officers deployed along the borders couldn’t be allowed to be worried about their family.

There have been cases in the army where officers were allegedly found to be involved in adulterous or extramarital relationships with the wives of their colleagues.

In army parlance, adultery is defined as “stealing the affection of a brother officer’s wife”. Offences of this nature are punishable with a court-martial and five years’ rigorous imprisonment under Section 69 of the Army Act.

In October 2017, the army had sacked a lieutenant colonel for his “unbecoming relationship” with a fellow officer’s daughter.

The officer’s wife had later approached defence minister Nirmala Sitharaman against the dismissal of her husband and appealed to her to reverse the order but it was not overruled.

Earlier, in 2015, the Supreme Court had ordered the government to reinstate a navy commander who had been sacked for an alleged relationship with a fellow officer’s wife, saying the mere exchange of explicit photographs or emails couldn’t be a ground for dismissal, as the alleged “adulterous relationship” appeared to be consensual.

A board of inquiry had held him guilty of exchanging explicit messages and photographs, including his nude photographs, with the wife of another naval officer.

Rawat said the army has “managed the situation well” along the borders with China and Pakistan and there should be no cause for concern but the situation in Jammu and Kashmir needs to improve. “We are only facilitators for peace in J&K,” he said.

“We have managed the situation well along the northern and western borders,” Rawat said.

“The same analogy can’t apply to Jammu and Kashmir. Talks in the state have to be on our terms,” he asserted.

The army chief said talks and terror could not go together and that applied to Jammu and Kashmir too.