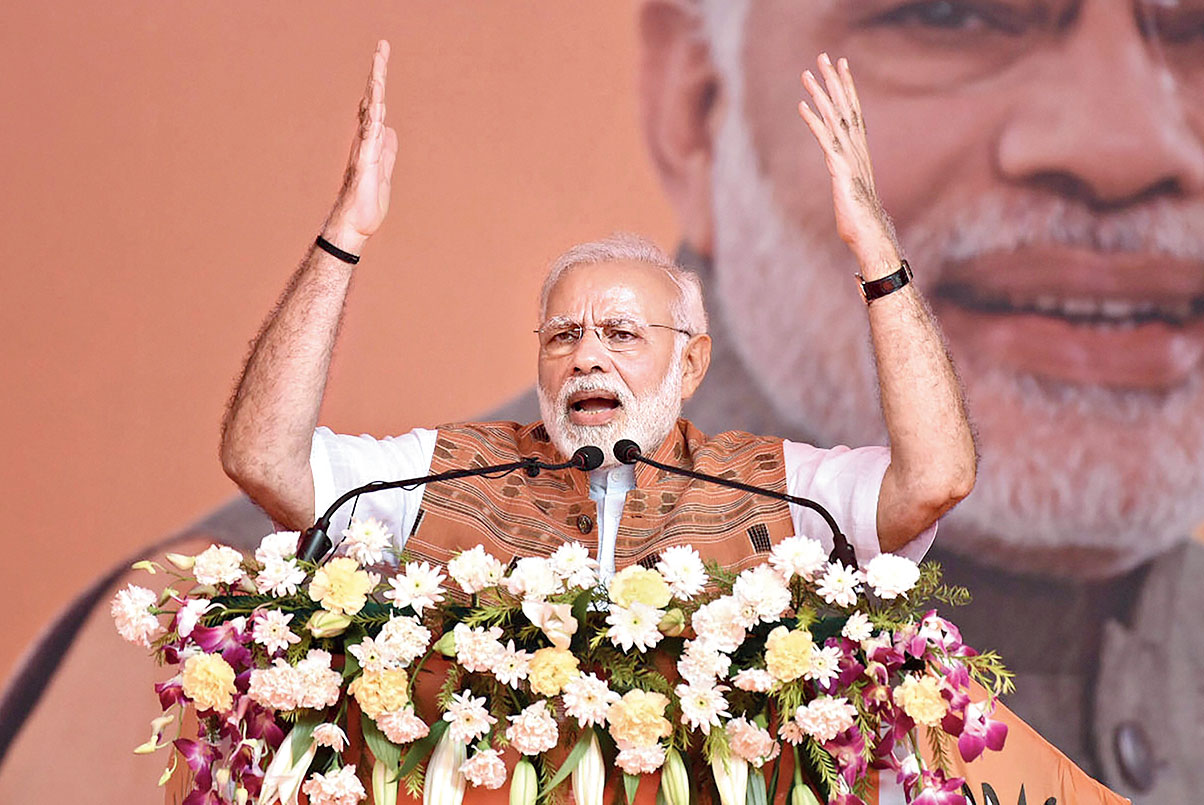 Prime Minister Narendra Modi spoke at a public meeting in Odisha of “PC (percentage commission)”, not in the context of the Rafale controversy but about alleged corruption in the state implementation of projects.
PTI picture
Our Bureau   |   New Delhi   |   Published 22.09.18, 10:10 PM

The French government, Dassault Aviation, former President Francois Hollande, the Indian defence ministry, the BJP and Rahul Gandhi spoke about the Rafale controversy since Friday evening. What about Prime Minister Narendra Modi? He did speak of PC or  percentage commission. But it is not about what you may think. The suspense is worth keeping up till the end.

The French government is “in no manner involved in the choice of Indian industrial partners who have been, are being, or will be selected by French companies”, according to the French Ministry of Europe and Foreign Affairs. The French ministry neither made any mention of former President Francois Hollande nor contradicted his purported statement that the Indian government had proposed the name of an Anil Ambani firm as a partner for Dassault Aviation, which makes the Rafale combat aircraft. In fact, the French ministry’s statement merely confirmed a part of what Hollande had purportedly said — that his government had no say in the matter.

The partnership with Anil Ambani’s Reliance “is the choice of Dassault Aviation”, the Rafale maker said in a statement. Dassault made no mention of Hollande, either. Nor did the company explicitly contradict the statement attributed to him. Dassault merely stated the obvious since it alone can choose its partner, being a private company. The key question is whether someone in power pushed Reliance’s case.

Hollande told AFP, the French news agency, on the sidelines of a meeting in Canada on Friday that France “did not choose Reliance in any way”. Asked whether India had put pressure on Reliance and Dassault to work together, Hollande said he was unaware and “only Dassault can comment on this”.

Hollande just reiterated a part of what he was quoted as having told Mediapart, the online journal that reported his explosive statement on Friday. He did not give a clean chit to anyone on employing pressure tactics, saying he was unaware and only the French company could reply. NDTV reported that Hollande’s office had said he was standing by his statement made to Mediapart.

The Indian defence ministry and the BJP cited a “pact for partnership” between Reliance Industries and Dassault Aviation in 2012, suggesting they were in touch when the UPA was in power and before Narendra Modi became Prime Minister in 2014. (The controversial Rafale deal was finalised in 2015 and signed in 2016).

Reliance Industries is owned by Mukesh Ambani, not Anil Ambani whose firm has entered into the current controversial deal. The 2012 agreement lapsed because the Mukesh Ambani group appeared to have had second thoughts about the defence business. Even if the 2012 agreement has been pursued, the state-run HAL would have remained the main manufacturer.

But in the deal finalised by Prime Minister Modi and President Hollande in 2015 in Paris, HAL has been shut out and there is no clarity whether any Rafale fighter would be made in India. The 36 promised planes are supposed to be in a “fly-away” condition.

On Saturday, Prime Minister Modi did speak about “PC (percentage commission)”. Before anyone thinks the Prime Minister was referring to kickbacks associated with some defence deals, the air must be cleared. Modi was speaking about the “PC” culture in Odisha, the alleged reason for the delay in the construction of toilets and other projects in the state. Not a word on Rafale from the Prime Minister although he addressed multiple public meetings during the day.

The Indian defence ministry did comment on the controversy, only to describe it as “unnecessary”. The ministry also made an unusual reference to the domestic issues of a foreign country. “The reported statement perhaps needs to be seen in its full context — where the French media has raised issues of conflict of interest involving persons close to the former President. His subsequent statements are also relevant in this regard.”