Advertisement
Home / India / Four generations have made same promises on poverty but nothing happened: Modi

Four generations have made same promises on poverty but nothing happened: Modi

Those abusing Modi on the air strikes are helping Pakistan with their statements, says Modi 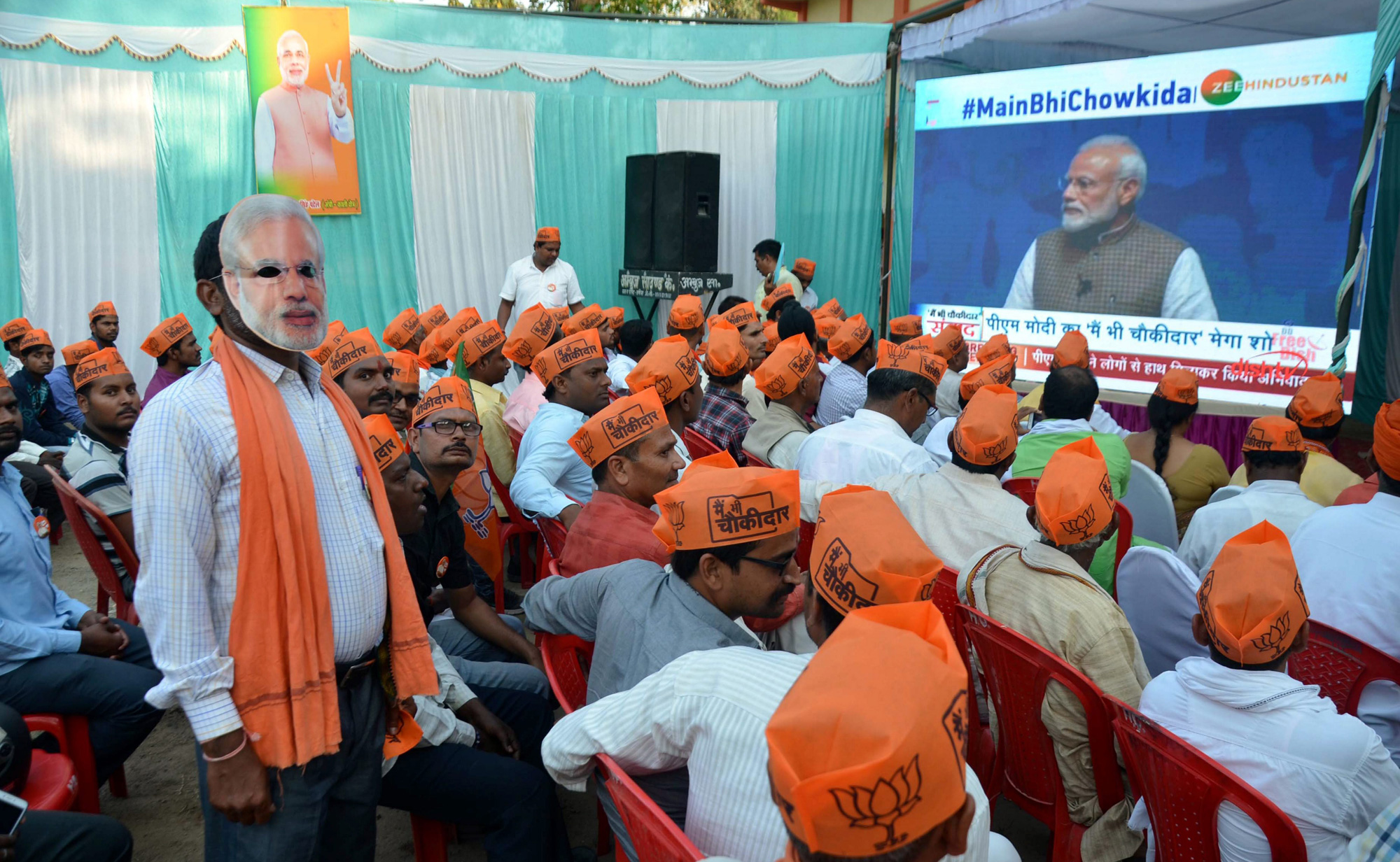 In an apparent dig at Congress' minimum income poll promise and the Gandhi family, Prime Minister Narendra Modi on Sunday said its four generations had made the same promises but nothing happened, and first- time voters should see the “track record” of those pitching for eliminating poverty.

Addressing a 'Main bhi chowkidar' event here, he also said 'Mission Shakti, demonstrating India's anti-satellite missile capability, had nothing to do with polls and hit out at those opposing his announcement of it in an address to the nation.

“The US, Russia and China did ASAT tests openly, why should we have hidden it,” he said replying to question at the event that was beamed across the country at 500 places where gatherings of BJP workers, professionals, chowkidars (watchmen), traders, farmers among others listened to Modi and interacted with him through video-conferencing.

To a question from Mumbai on the Balakot air strikes, the prime minister said they were carried out by the country's security forces and not by him.

Modi said he took the decision for the Indian Air Force (IAF) to conduct the air strikes as he thought that “the game” should be played from where terrorism is being remote-controlled.

He said Pakistan is in a fix because if it acknowledges the air strikes, it will have to accept that there was terror camp there.

“They have been saying that there are no terror camps. Now they have to hide it. They are not allowing anybody to go there. We've been told Balakot area is being reconstructed by Pakistan to show that a school is being run there, so that people can be taken there and shown that no terror camp existed there,” he said.

Those abusing Modi on the air strikes are helping Pakistan with their statements, he said.

Modi also said that a government with a clear mandate was very important. India's voice is heard because it has a majority government, he said.

Taking a dig at Congress' NYAY minimum income programme, he said, “I want to tell first-time voters that they should see the track record and not listen to their 'tape record'.”

He said the country's first prime minister had expressed concern about poverty and had talked about eliminating it. “His daughter then took it ahead, the slogan (to remove poverty) as well as poverty. Her son also expanded the slogan and the country's poverty,” Modi claimed.

“His widow then ran the country using a remote control for 10 years and she also expanded poverty. Now her shehzaada is doing the same,” Modi said in an obvious reference to former prime ministers Jawaharlal Nehru, Indira Gandhi and Rajiv Gandhi, as well as former Congress chief Sonia Gandhi and current party president Rahul Gandhi.

Modi urged first-time voters to see their track record as four generations have been talking about removing poverty over and again but have not been doing anything about it.

“It is the job of the new voters to understand those who lie,” Modi said.

He said the country does not need “rajas and maharajas” and it made him happy that the spirit behind 'chowkidar' (watchman) is expanding.

On a question on corruption, the prime minister said those who have looted the country will have to “return every single penny” and the property of defaulters in any corner of the country, will be confiscated.

“I pledge no one looting the country will be spared,” Modi said, making indirect references to alleged economic offenders such as Vijay Mallya and Nirav Modi.

“From 2014 to 2019, I took some people to the threshold of jails. But I need more time to take them inside. I need your blessings. In the coming time, I am going to be more strict with those who are looting the country,” he said.

Today, India is sixth largest economy and knocking at the doors of becoming a USD three trillion economy, he said.

”I want to take the country to the five trillion dollar economy club and it has to be made into an economic superpower,” he said.

“I have full faith that we will take the country to new heights. In 2022, the country will complete 75 years of Independence. There will be no family in 2022 that will not have its own pucca house. It is my dream that the income of farmers doubles by then. These are the things we have to stress on for entering the five trillion dollar economy club,” Modi said.

On criticism of his Mission Shakti address to the nation, Modi said it had nothing to do with elections.

“It's an achievement of our scientists. When the US, Russia and China did it openly, why should we have done it clandestinely,” he said.

Mission Shakti is a matter of pride for India but some have problems because Modi did it, he said.

The prime minister also alleged that the Congress' lies were seasonal as during the Delhi Assembly polls they created the “lie of intolerance” and in Bihar assembly polls they said Modi will take back reservation.

Some people are not able to digest the fact that a chaiwala became a prime minister, Modi said.

Modi also said that for him chowkidar is representative of Mahatma Gandhi's concept of trusteeship.

Govt has taken measures to set up 'chowkidar' in space: Modi in Odisha