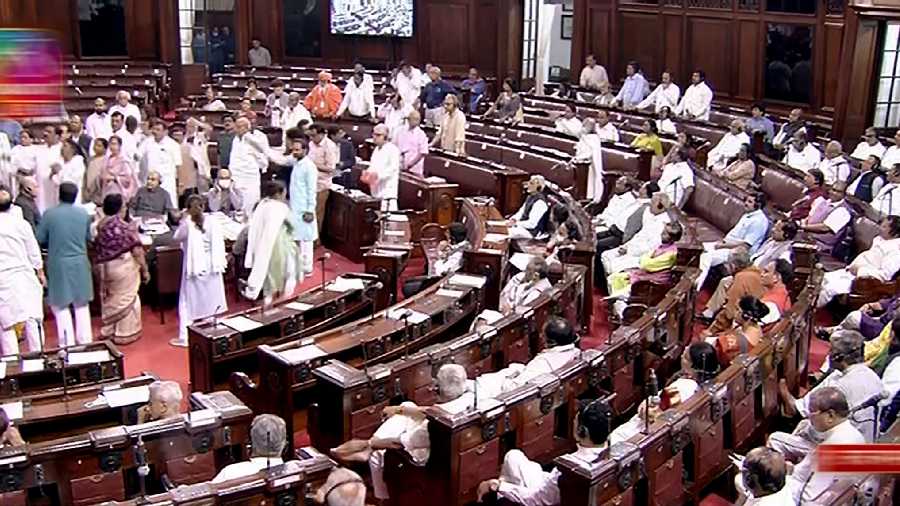 Four Congress MPs were suspended from Lok Sabha for the rest of the session for displaying placards and disrupting proceedings despite a warning by Speaker Om Birla.

Later, Parliamentary Affair Minister Pralhad Joshi moved a resolution to suspend the four for the rest of the session.

The House then passed the resolution by a voice vote and Rajendra Agarwal who was chairing the proceedings announced their suspension. He later adjourned the proceedings for the rest of the day.

Soon after four of its MPs were suspended for rest of the session for disrupting proceedings in Lok Sabha, the Congress on Monday said the government was trying to "intimidate" it, and asserted that the party will not be cowed down.

Four Congress MPs -- Manickam Tagore, TN Prathapan, Jothimani and Ramya Haridas -- were suspend from Lok Sabha for the rest of the session for displaying placards and disrupting proceedings despite a warning by Speaker Om Birla.

Speaking with reporters along with the four suspended MPs, Congress' deputy leader in Lok Sabha Gaurav Gogoi said, "The government is trying to intimidate us by suspending our MPs. What was their fault? They were trying to raise the issues which matter to people."

The Congress party will not be cowed down like this, he asserted.

"The MPs were holding placards raising the issues of rise in prices of gas cylinder, imposition of GST on items such as flour and buttermilk. We moved an adjournment motion demanding a discussion on these issues, but no discussion was held," he said.

Tagore, one of the suspended MPs, said for the past six days, the Congress has been demanding a discussion on price rise, giving notices for adjournment motion but the government has shown "complete arrogance".

"Today, when a tribal woman has taken oath as President, a Dalit woman has been suspended from Lok Sabha," he said.

Tagore also alleged that the BJP only wants Parliament to cheer its leaders and its victory.

"We were trying to show placards in the House and place them in the camera angles. They say placards are not allowed in Parliament... what is allowed is only cheering for Modi ji," he said.

The government only hears the voice of the fourth-richest man in the world and not the common man, Tagore alleged.

A visibly upset Lok Sabha Speaker had warned Opposition MPs that he was willing for a discussion after 3 pm, but that he wouldn't tolerate any placard protest inside the House, reports ndtv.com.

"If you want to show placards, do it outside the House. I am ready for discussions, but don't think my kind-heartedness is a weakness," the Speaker said. Later, he adjourned the proceedings till tomorrow (Tuesday).

When the session resumed after 3pm it was adjourned 20 minutes into Zero Hour earlier Opposition MPs, however, returned with the placards.