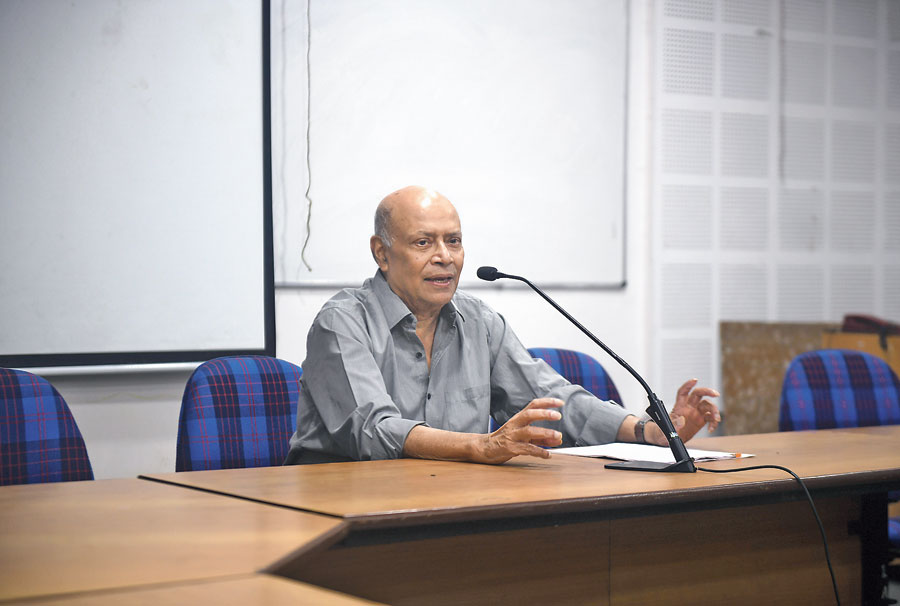 The BJP’s brand of Hindutva does not recognise the plurality among Hindus and the party is realising this following the participation of diverse sections of society in the protests against the new citizenship regime, an academic said on Tuesday.

Amit Bhaduri, who made the comment while delivering a lecture at Jadavpur University, was an emeritus professor at Jawaharlal Nehru University till he resigned to protest the violence unleashed by masked goons on the Delhi campus on January 5.

The BJP, he said, was confident that it would not have to bother about a particular minority community since it constitutes less than 20 per cent of the population.

“But the Hindu society is not as monolithic as the BJP thought. Not only are there adivasis, who are 8 per cent (of the population), there are Dalits, who constitute almost 22 per cent. If you add to that some of the so-called lower castes of the caste Hindus, who have as much contradiction with the upper caste Hindus, the figure goes up,” the economist said in his lecture at Anita Banerjee Hall.

The importance of Shaheen Bagh and other pockets of popular resistance, Bhaduri said, lies in the fact that they are “pointing out to the BJP the fissures within their own ideologies”.

Bhaduri accused the RSS, the ideological fountainhead of the BJP, of selectively picking icons to suit a divisive agenda. So, V.D. Savarkar trumps Gopal Krishna Gokhale, who had used religion “only as an anti-colonial instrument”.

“The RSS never mentions Gokhale. He had used popular symbols as symbols of our resistance against the British. And Ganesh Puja was one of them. Never, never have I seen Golwalkar (M.S. Golwalkar, the second RSS chief) having said anything or admiringly talking about Gokhale. He (Gokhale) used religion only as an anti-colonial instrument and... Gokhale was never part of the RSS ideology…. Savarkar... became collaborator of the British after spending 15 or 16 years in jail.”

Gokhale, who was born on May 9, 1866, in present-day Maharashtra, had become president of the Indian National Congress in 1905 and was a mentor to Mahatma Gandhi.

Bhaduri urged students in the audience to highlight the RSS’ tendency to selectively pick national icons during any “street debate” with anyone with Right-wing views.

“This is the point to remember about in a street debate with people who want to say other things,” Bhaduri said.

“The BJP’s ideology is that we stand for the culture of the Hindus and by that we mean upper caste Hindus. But the majority of Indians may not accept that and that depends on popular resistance,” he said.

The BJP is fast coming to the realisation that the Hindu society is not so monolithic, Bhaduri feels, thanks to the spread of the protests against the new citizenship matrix and the participation of people from all communities in them.

A popular movement, he said, need not always aim to unseat a government. “The essential point of maintaining resistance is not to throw away an elected government but to make clear that ‘majority is a much more ambiguous concept’,” he said.

A striking feature of the ongoing protests is that the Muslim women and the Dalits are asserting themselves. “This assertion will spread the scope of the protests,” he said.