Advertisement
Home / India / For Rahul, not work as usual

For Rahul, not work as usual 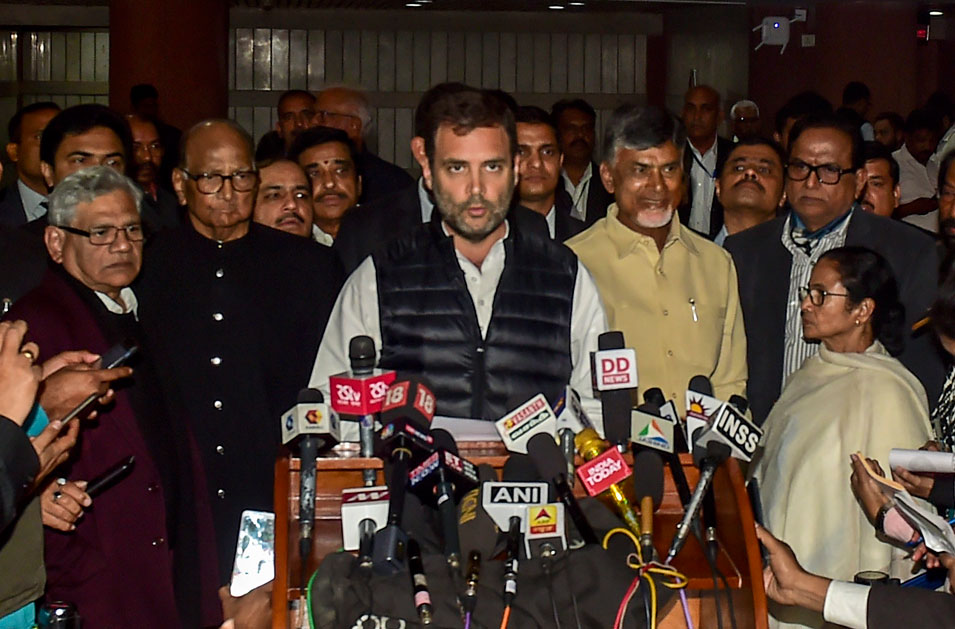 Rahul Gandhi on Wednesday decided to cancel the Congress Working Committee meeting and a mega public rally scheduled in Ahmedabad a day later, causing consternation among party leaders who lamented that the entire public space had been vacated for the ruling BJP, which has continued with its election-related programmes.

The Gujarat unit had worked hard for the past fortnight to mobilise a huge crowd for Thursday’s rally, apart from completing the logistics for holding the CWC meeting.

The Congress president, however, overruled the reservations as he felt the party should not continue with such a big programme at a time there were clear signs of escalation on the border and when an Indian fighter pilot had been captured by Pakistan.

UPA chairperson Sonia Gandhi, who hosted a meeting of Opposition parties in the afternoon, cancelled the scheduled lunch. The meeting had been called to talk about a common minimum programme but the senior leaders decided to restrict themselves to discussing the national security situation.

Prime Minister Narendra Modi has continued with his scheduled programmes, even addressing public rallies and going on a foreign tour, and will on Thursday address what the BJP has advertised as the “biggest video conference in the world” — a party event in which he will interact with booth workers. On Wednesday, he launched a Khelo India mobile app to promote fitness.

Asked if the Opposition was having withdrawal symptoms in the new climate brought in by the India-Pakistan tensions, Congress spokesperson Randeep Surjewala told The Telegraph: “Not at all. We are committed to expose the BJP’s failures on national security but today is not the occasion for partisan political warfare. Our minds are with the Indian Air Force pilot who has been captured by Pakistani troops.”

Surjewala added: “Rahulji felt we can’t hold our meeting in this atmosphere and hence cancelled the CWC. We have noticed how the ruling party has behaved but our conduct is not dependent on the politicking of the Prime Minister, the BJP chief and the ministers. It is a period of grief and tension and we have shown restraint. It is saddening that even today, when Pakistan tried to attack our military installations and captured our pilot, the Prime Minister was busy with his programmes and the home minister went to Chhattisgarh for a political rally.”

Rahul had earlier called off a scheduled lunch meeting with G20 envoys after the Pulwama massacre. At public rallies in Guwahati and Tirupati that he has addressed after the attack, the Congress president has been restrained. While continuing to question Modi’s governance record and raising issues such as jobs and farm distress, he has not targeted the Centre over the massacre.

At the Opposition meeting on Wednesday, he tried to address concerns about Modi exploiting the military conflict for political gain, asserting that people do not appreciate such action. Rahul said the best course in this hour was to express solidarity with the forces and avoid doing anything that appeared like extracting political mileage from the situation.

The Congress president lifted the mood at the meeting when he said there was no need to be defensive and that everyone should forcefully expose the failures of the Modi government. He insisted that Modi would lose the 2019 election.

Other Opposition leaders, however, were not as optimistic and expressed grave concern over the Prime Minister’s brazen politicking over the soldiers’ valour. Almost every speaker at the meeting said Modi was building his macho image on the martyrdom of Indian soldiers.

Modi has obliquely or directly referred to the air strikes, and has bluntly attacked previous governments and the Congress in most of his engagements since the Pulwama massacre. Although the BJP claims his engagements are official, the Prime Minister has delivered political speeches and sought a renewed mandate for himself. He has gone so far as to declare that with him, the “country was in safe hands”.